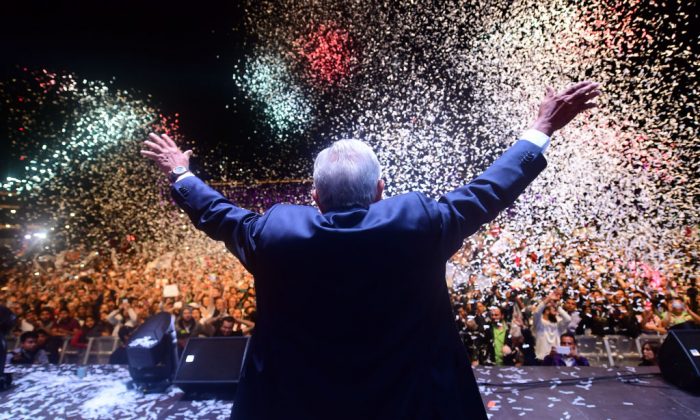 Cracks have already appeared for Mexican president-elect Andrés Manuel López Obrador (AMLO). While his inauguration is still four months away, the National Electoral Institute has fined his political party $10 million for campaign-finance violations.

Even if he personally escapes prosecution, this example is merely the trickle before the dam bursts. Unfortunately for Mexico, the river of corruption his tenure is set to usher in will go far beyond his administration, and it will do long-term damage to the nation.

AMLO’s flamboyant approach to fighting corruption suffers from a fundamental error, which dooms him to fail in his stated objective. Not only will he fail, he may be on a path to making matters worse. That is not an easy task, given that Mexico already ranks 135th out of 180 nations on the Corruption Perceptions Index, published by Transparency International.

This outlook holds even if he honestly wants to fight corruption, which is doubtful.

The sophomoric mistake in AMLO’s rhetoric and plans is the notion that corruption is the problem in and of itself, when it is actually a symptom and an outcome of many deeper problems. Mexico’s national leader can speak until he’s blue in the face prosecuting people and condemning corruption, but until AMLO and Mexico’s Congress of the Union address the incentives and constitutional structures in place, little will change except the faces of the people carrying out the corruption—while Mexicans continue to pay for what amounts to a tax and drag on the economy.

This conclusion is a fundamental lesson of public-choice economics, which should be sobering for Mexican voters and international observers. Described by Nobel economist James Buchanan as “politics without romance,” public choice demonstrates that political actors, be they elected officials or state bureaucrats, are self-interested like the rest of us: power seeking and responsive to incentives. That is why solely bringing in new personnel—in the absence of structural changes—is insufficient to change a nation’s course.

Such a dispassionate assessment, through the lens of economics, helps us to lift the veil on what corruption is. Assuming self-interested officials who push as far as they can, one must account for the fact that many corrupt acts in politics are still nominally legal. Mexico has her own swamp, of course, and that is the people who feed at the trough of largesse taken from taxpayers.

The determining question then, regarding what constitutes corruption, is whether political acts are within the moral role of government, which is protecting the rights of Mexican citizens. This is where AMLO is out of touch, as his policy proposals—of those he has detailed—offer a litany of opportunities for political patronage, cartelization, profiteering, favoritism, and wealth redistribution.

Running in the Wrong Direction

Ironically, these proposals, which institutionalize corruption, come under the “anti-corruption” banner of the National Regeneration Movement (Morena). In fact, Mexico’s openly communist Labor Party, founded by Maoists, is a key member of AMLO’s electoral coalition, which goes by the name of Together We Will Make History. Aligned with the 21st-century socialism of Cuba and Venezuela, the Labor Party’s branding includes the communist star with the same red and gold as the Chinese flag.

Yes, they will make history, but likely for all the wrong reasons. Hugo Chávez ran as an outsider for the Venezuelan presidency, claiming to fight the corrupt status quo, and we saw how that turned out. Attendees of the Sao Paulo Forum, a conference of socialist parties from across Latin America, were big fans of Chávez in 1999, and they are big fans of AMLO now.

As noted by Daniel Raisbeck—a fellow of the U.K.-based Initiative for Free Trade—interventionism, as promised by AMLO on a massive scale, “breeds not only economic inefficiency, but also considerable corruption.”

In other words, corruption thrives on bloated, expansive government that serves special interests, rather than constituents.

Johns Hopkins University economist Steve Hanke offers the other side of the coin: “To fight corruption, [AMLO] will have to shrink the government and deregulate the economy. … He has promised to do just the opposite.”

Policies of a Demagogue

Let’s consider a few of AMLO’s most prominent proposals, which tend to be misguided and waiting to backfire. Some do appear positive, such a reduction in state managerial positions, but remember that AMLO has utilized plenty of campaign chicanery with positions that are mutually exclusive—par for the course with Latin-American populists.

AMLO wants to outsource the investigations of human-rights and corruption cases to the United Nations. This sounds like a bad joke, but he is serious:

“The United Nations is going to help us. We are going to lean on them because they have [an anti-corruption office].”

Anyone who follows the United Nations knows that the organization has no credibility regarding human rights. The purported U.N. Human Rights Council, which claims to be “strengthening the promotion and protection of human rights around the globe,” includes the likes of China, Cuba, and Saudi Arabia. It is no wonder that the Trump administration has withdrawn from participation.

Nikki Haley, U.S. Ambassador to the United Nations, described it as “a hypocritical and self-serving organization that makes a mockery of human rights.”

Guatemala has tried AMLO’s idea with the U.N. International Commission Against Impunity (CICIG), only to find the cure worse than the disease. Predictably, the CICIG has engaged in selective, ideological prosecutions, interfered with Guatemala’s internal affairs, divided the nation, and undermined the rule of law.

Another AMLO plank for fighting corruption and crime is amnesty. If we wipe away people’s wrongdoings, then it’s as if they never happened. In particular, rather than come down hard on organized criminals with punishment that fits, he wants agreements that would free many from charges. At the same time, he wants to remove troops from the streets and invite Pope Francis as a gesture of peace. You can guess what good that will do.

A central planner at heart, AMLO has promised to “adjust the free-market model,” not that Mexico ever exemplified free markets. Mexico is far behind Canada and the United States for economic freedom, but AMLO has myriad plans for an expanded welfare state, heavy subsidies, and price controls. The list is a progressive’s dream; it includes doubling the minimum wage, a universal right to higher education, “free” internet in public spaces, fixed basic-goods prices, and dispersed federal agencies throughout the Mexican states. Siding with organized labor for a “unionized democracy,” he even wants to do away with entrance exams that have placed a modicum of accountability on the national teachers union.

Any price control will generate shortages or surpluses and foment a black market, since off-the-books providers will use arbitrage to close the gaps. Further, any intervention in industry is a sure-fire recipe for a base of cronies who will grease the wheels of any politician or political party that sides with them.

Fallout on the Horizon

We are supposed to believe that at the same time, AMLO will raise no taxes, generate no new debt, and maintain low inflation—all possible because his administration is “honest.” AMLO has even recommended reduced-tax jurisdictions near the U.S. border to attract investment.

Apparently, you can have your cake and eat it, too.

The truth, however, is that AMLO will need tens of billions of dollars to fund the pet projects of his tenure—$54 billion, according to El Financiero, the Bloomberg-affiliated newspaper in Mexico. To put that into perspective, Mexico’s entire annual GDP only just surpasses $1 trillion.

Despite assurances to the contrary from AMLO, the Bank of Mexico’s independence is going to come under extreme pressure in the next six years. In recent times, it has done a relatively good job, maintaining inflation at below 5 percent. However, without higher tax revenues and willing lenders, Mexico’s central government will look to the printing press to uphold its rosy promises.

As a sign of what is to come for the United States—more economic stagnation south of the border—AMLO already is begging Trump for development aid to mitigate northward migration. Whether Trump will be forthcoming remains to be seen, although he might see it as a bargaining chip. Regardless, the man who believes Mexicans have a human right to enter the United States illegally is set to entrench Mexico’s problems and drive many more to do just that.