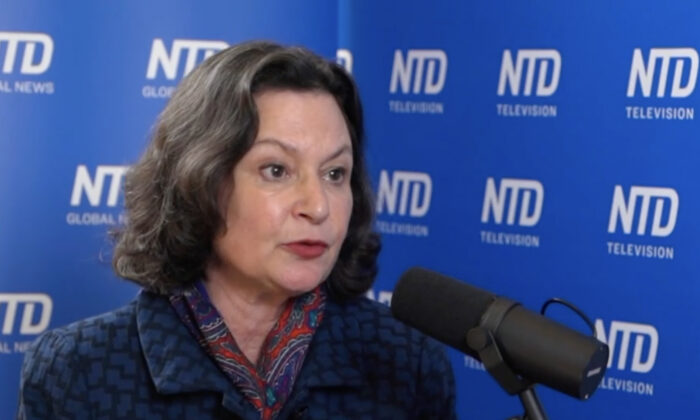 Mary Eberstadt in an interview with NTD's "Capitol Report," broadcast on Dec. 29, 2021. (Screenshot via The Epoch Times)
Big Tech, Censorship, and Socialism

Why More Young People Favor Socialism and What We Should Do: Mary Eberstadt

A growing number of young people now favor socialism over capitalism. According to author Mary Eberstadt, that’s because these young people have been deliberately miseducated, and they should learn more about the history and truth.

“Partly because they have been deliberately miseducated about their country’s past,” Eberstadt said in an interview with NTD’s “Capitol Report” broadcast Wednesday.

Eberstadt is a Senior Research Fellow at the Faith & Reason Institute. She is an essayist, novelist, and author of several books. She was a Senior Fellow at the Hoover Institution from 2002–2013 and was a speechwriter for Secretary of State George Schultz between 1985 and 1987.

Eberstadt said that it’s now been generations that a certain kind of anti-Americanism has been dominant, especially on university and college campuses.

“What young people need to understand is that there are deep reasons why they’re being fed that narrative. They are being deprived of the grandeur of their country’s history and its lessons. And the reasons for this are that they are the backbone of a political movement that exploits them, called progressivism,” Eberstadt said.

She added that Marxism actually has a lot to do with progressivism.

“I can say this with authority because when I was in college, which was decades ago, Marxism was prevalent on all the elite campuses,” said Eberstadt, who graduated from Cornell University in 1983. “And it’s coming back in this sort of softer form that goes by socialism, but it shares a lot of Marxist precepts.”

Eberstadt said there’s a great need for young people to understand the history of communism and socialism and other truths that their teachers have deprived them of for political reasons.

“It was always said that socialism just hadn’t been tried right. And this was used to excuse failure after failure in every country that attempted to implement a Marxist regime,” Eberstadt continued.

“What students need to know that they are not told, what would make them far less interested in socialism, would be working knowledge of the tragedies that have transpired under plans to re-engineer human beings on a mass scale,” said Eberstadt. “We’re talking about the great famines. We’re talking about other collectivized activities that have ended up imprisoning and murdering people in the name of an abstract, higher Marxist good. And history is littered with these examples, as we know, and letting children and teenagers in on that fact is an important part of the teaching of history tomorrow.”

Besides the history of failure of collectivist experiments, other truths should also be taught in classrooms across the country, said Eberstadt.

“Number two—and this is in no particular order—the grandeur of American history with all of its problems. Number three, the economic vitality and material abundance of the free enterprise countries relative to the collectivist countries. And number four, the way in which socialist regimes, Marxist regimes, communist regimes have suppressed not only religion but the family. [They] have suppressed any other potential contender for people’s loyalties,” Eberstadt continued.

“These are all easily ascertainable facts, and we need leaders to voice them, and we need teachers to impart them.”