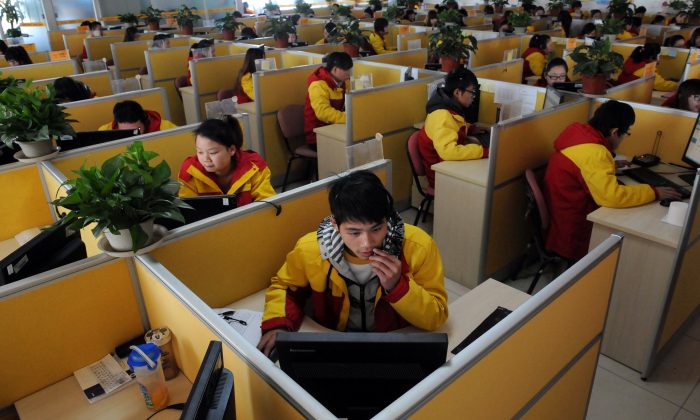 Workers check deliveries in Beijing in 2013 the day after "Singles Day," which falls on Nov. 11 each year. Chinese are increasingly spending big in online shopping on Singles Day. (STR/AFP/Getty Images)
Opinion

Why More People Shop Online in China Than the United States

But this still amounts to only about 19 percent of the staggering $14.3 billion (91.2 billion yuan) that Alibaba’s Tmall, one of China’s largest online shopping sites, raked in on Nov. 11, China’s “Singles Day,” which turned out to be the biggest one-day online shopping bash ever.

One of the reasons for the eye-catching discrepancy is because the main portion of Black Friday sales in the United States still comes from in-store shopping.

According to last year’s data by ShopperTrak, Black Friday sales overall were $11.4 billion. This year’s numbers were only slightly behind.

Why do so many Americans still love shopping in traditional stores?

Take a look at today’s China: A large number of traditional retail stores have either closed or are barely surviving. But the online shopping delivery services are very busy. It is obvious where consumers go—to Taobao, Tmall, and JD.

Why is online shopping just “dessert” in the United States but the “main course” in China?

In China, online shopping is much cheaper than shopping in stores. In the United States, however, there is not much of a price difference. Despite the fact that Chinese media continues to report on fraud and fake and substandard products being sold online, it has not deterred consumers’ enthusiasm for online shopping and has created a big gap between online and traditional shopping, with brick-and-mortar stores getting very little business now.

Merchandise in Chinese stores is higher-priced because of the many intermediary transactions and costs, such as store rent, employee wages, consumption tax, and so on. Online sales remove many of these intermediary costs and are able to offer lower prices.

In the United States, consumer goods do not go through as many steps from factory to store, and neither is there the kind of rent-seeking found in China, so prices are not as high. This is what Jack Ma meant when he said, “The infrastructure in the U.S. for doing business is so good.”

Thus, a main reason for the online sales in the United States being lower than China’s Tmall sales lies in the two countries’ different economic systems. Ultimately, if China does not change its rigid economic system, it will not be easy for China’s economy and traditional stores to get out of the current slump.