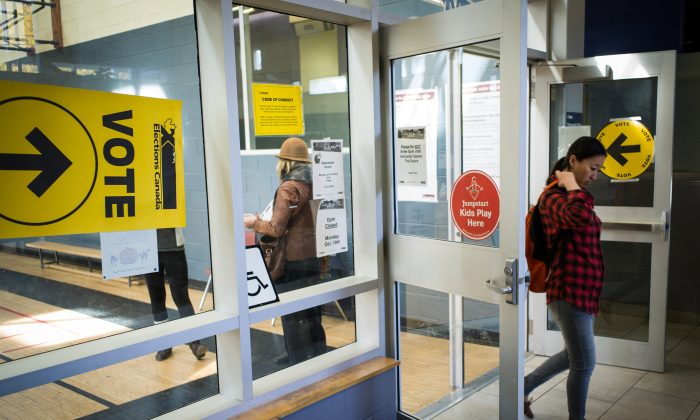 Voters make their way in and out of the polling station at the Mary McCormick Recreation Centre, in Toronto's Davenport riding, during the 42nd Canadian general election, in Toronto, Ontario, Canada, on Oct. 19, 2015. (Ian Willms/Getty Images)
Canadian Content

On Monday, millions of Canadians, young and old, cast their ballots. “Apathy is Boring”—a project aimed at increasing youth political participation—would like to particularly applaud the participation of young and first time voters.

Why Did the Voter Turnout Rate Increase?

There’s no silver bullet to eradicating the problem of low voter turnout, though the rise in participation this election can be attributed to several factors.

First, this election came at the heels of a full four year term. Unlike the previous elections which saw snap elections and minority governments every two or three years, voter fatigue was not an issue this election. On the contrary, many wanted the opportunity to have their voice heard at the polls.

The close race helped voters recognize the influence that their vote could have on the outcome of the election. Throughout the election period, the polls suggested that the three main parties were all competing for the lead. Although the polls over the closing days of the campaign saw the Liberals command a solid lead, the tight race throughout the campaign solidified the importance of each and every vote.

Voter turnout rates may also be the result of new Elections Canada initiatives aimed at making voting more accessible. For the first time Elections Canada set up campus polls, open for four days on 40 campuses as well as 17 Friendship Centres across Canada. These polls allowed out of town students to vote in their ridings back home. This pilot project, which saw 70,000 people turn up at these locations across Canada, clearly answered a need that many Canadians had in terms of providing a diversity of ways to vote.

Technology likely also contributed to the increase in voter turnout—most notably the harnessing of social media. Twitter Canada reports that the hashtag #elxn42 was used 3.4 million times during the election period.  This is four times more than the use of #elxn41 in 2011. Most candidates took to Twitter at some point during their campaign to make announcements or promote their events.

The work that Apathy is Boring does, along with other partner organizations such as The Canadian Alliance of Student Associations and Elections Canada, to provide young and first time voters with non-partisan information about the election also aided in increasing turnout. As research studies have shown, each personalized contact with an individual raises that individual’s probability of voting by close to 10 percent.

Knowing this, Apathy is Boring had more on the ground volunteers conducting peer-to-peer outreach than in any election before. Our volunteers attend concerts courtesy of Apathy is Boring’s artist advocates, like Patrick Watson, Braids and the Stars, among others. Youth volunteers were active across Canada in informing young Canadians about the election through meaningful conversation and by providing voting resources.

In line with this approach, Apathy is Boring ran day-long outreach initiative in both Montreal and Toronto with the specific aim of helping youth find their polling stations and ensure they had the required identification in hand. This project reached over 1600 young people directly and even inspired first time voters and apprehensive voters to cast a ballot.

Although Apathy is Boring is thrilled that voter turnout in the 2015 federal election has increased, the work is not over. A turnout rate of below 50 percent for Canadians under 30 is nothing to be excited about, especially when we consider that voting, or not voting is habit forming. In other words those who do not vote in the first two election that they are eligible to vote in often remain non-voters throughout their lives.

Apathy is Boring’s is therefore active year round, offering non-partisan information for Canadian elections at all levels—federal, provincial, and municipal.

Apathy is Boring also strives to get young Canadian involved in their communities through volunteer work as well as establishing sustained dialogue with our elected officials. Through increasing civic participation we hope to continue to improve voter turnout rates in general and youth voter turnout rates in particular.

Caro Loutfi is executive director of Apathy is Boring.