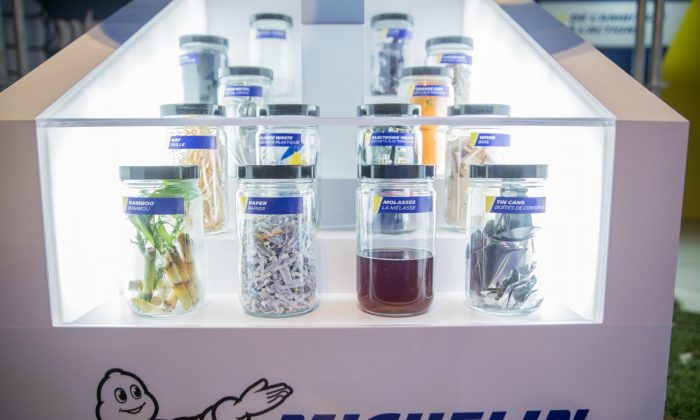 Why Michelin Decided to Reinvent the Wheel

MONTREAL, Quebec—Based on crude diagrams rendered on ancient clay tablets, the earliest known use of the essential invention we call the wheel, was likely a potter’s wheel that was used at Ur in Mesopotamia (part of what is now considered to be modern-day Iraq) as early as 3500 BC. As a tool, likely crude, barrow like conveyances were used to move items from A to B—all by sheer brute force and the immutable laws of physics. The first use of the wheel for transportation was probably on Mesopotamian chariots in 3200 BC.

So as you can see, wheels have been a part of our lives for quite some time. As you may well imagine, the very first wheels were remarkably crude, yet managed to make the tasks they were used much easier. Some consider the wheel to be one of the most important inventions ever.

As man developed and time passed, wheels became the foundation of and integral to society. There are few things where the premise of a wheel or a wheel-like object is far from any individual’s everyday usage.

So, with this in mind, why would anyone decide that the time was right to literally reinvent the wheel?

That would be Michelin, a French tire manufacturer based in Clermont-Ferrand in the Auvergne region of France. Michelin is one of the four largest tire manufacturers in the world along with Goodyear, Continental, and Bridgestone.

Innovation… the Mother of Invention

Always an innovator and rarely satisfied with the status quo, Michelin has and continues to be at the forefront of tire technology. In fact, Michelin’s numerous inventions include the removable tire, the “pneurail” (a tire specifically designed for trains made to run on rails), and the now seemingly ubiquitous radial tire.

With this pedigree, it should come as no surprise that Michelin engineers continue to find new and exciting ways of pushing the wheel—excuse me, the envelope.

Quite simply, Michelin has developed a new way to create and even change a tire.

Presented to an unsuspecting world in Montreal in June 2017, Michelin’s Vision concept is an airless “tweel”—a combination, a hybrid if you will, a tire and wheel made from 3D-printed bio-sourced materials that will actually allow for new and different treads to be applied as they wear down or the seasons change.

OK, is that clear? Treads produced on demand regardless of the conditions. And yes, they are produced or rather, rendered, as required on 3D printers!

The Vision is designed to mimic the structure of coral: It is stiff at the centre and gets gradually softer as it approaches the outside edge. With its “rechargeable” tread design, the thickness of the outside layer can be thinner than a typical tire’s, which makes it more efficient to produce and operate. No more flats. No more blow outs. There is no need to add air or even nitrogen gas to ensure that the Vision retains optimum pressure!

Imagine a 3D-printed wheel with a thin coating of tread around its circumference. Now imagine that band of tread can be changed to suit specific conditions. Want a heavy tread to plow though snow on the way to the slopes? How about an aggressive compound for a track day this weekend? Or a quiet, comfortable ride for the road trip you’ve been planning with the family? The Michelin Vision can do all that and more.

The Vision was engineered with embedded sensors that monitor its condition and integrate with a mobile application on your smart phone. Owners would use their device to schedule an appointment to have it “recharged” (retreaded), or simply have the tread design updated as necessary—like when winter comes around and local temperatures consistently fall below seven degrees Celsius assuming you likely live in the northern hemisphere. The 3D printing process creates a structure that looks like “alveoli”—the tiny air sacs found inside the human lung. It is designed to be strong in the centre with more flexibility built in towards the rim.

A Biodegradable Product to Keep the World Moving

Manufactured from available sustainable materials, the Vision is also considered biodegradable, and would by any standards be considered green—eco-friendly! Let’s explain that and remove the deep furrow from your brow. To minimize its environmental impact, the concept tire is made from bio-sourced and biodegradable materials, including natural rubber, bamboo, paper, tin cans, wood, electronic and plastic waste, hay, tire chips, used metals, cloth, cardboard, molasses, and orange zest. A “tire” made from recycled materials.

The tread design is optimized to reduce its depth, which in turn reduces its thickness and makes it much more efficient material-wise and with less weight, will help contribute to overall fuel economy.

Let’s be quite clear. The Vision is a concept. It’s not even at the prototype stage. In terms of product life-cycle, this would be considered near the beginning. Will it ultimately come to market? Well, long-term, that is the plan and the hope. But that day may be some time away.

Mostapha El-Oulhani, the leader of the Vision Project, has stated publicly that the Vision concept is a realistic possibility in the near future. “Given how we developed it, the Vision concept tire is a showcase of our expertise as well as a promise of the future. We wanted the Vision to be realistic since no purpose is served by designing objects or services that we know pertinently are unrealistic.”

And there you have it. This futuristic design from forward-thinking engineers may change an entire industry. Will it replace the tire as we know it? That’s too far off to tell. Much can and likely will happen in the near and long-term as this potential product evolves. Who knows? In a galaxy far, far away, according to futurists, vehicles will hover and use heretofore unimagined propulsion units. No tires. No wheels. No tweels.

David Taylor is an independent automotive lifestyle writer, producer, and editor based in Barrie, Ontario who is fascinated by innovation and technology which enhance the overall driving experience. He’s also a member of the Automobile Journalists Association of Canada (AJAC) and a Director of AJAC’s annual Canadian Car of the Year program. Follow him on Twitter @Omemeeozzie or on Instagram @hugoscaroftheweek.