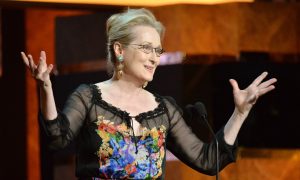 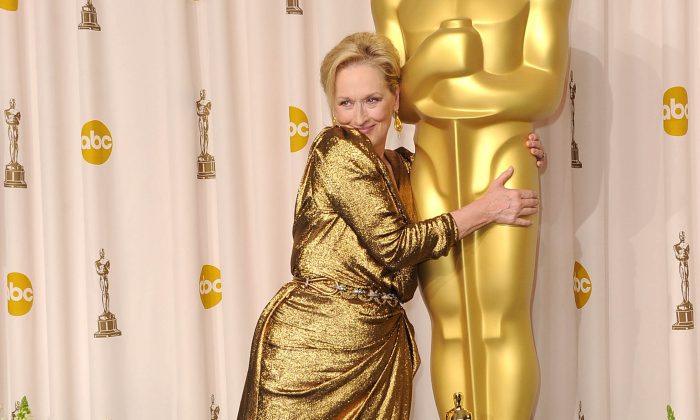 Actress Meryl Streep, winner of the Best Actress Award for 'The Iron Lady,' poses in the press room at the 84th Annual Academy Awards held at the Hollywood & Highland Center on February 26, 2012 in Hollywood, California. (Photo by Jason Merritt/Getty Images)
Entertainment

Why Meryl Streep Should Win a Fourth Oscar

As a three-time Oscar winner, Meryl Streep is only one of six actors with that status.

With Sunday night’s Oscars, there is a chance she will catch up with Katharine Hepburn—the only actress to win four Academy Awards for lead roles.

Streep’s history with the Oscars began in 1980, when she first won Best Actress in a Supporting Role. She played a wife who divorces her workaholic husband in the family drama “Kramer vs. Kramer.”

She then went on to take the Academy Award for Best Actress in 1983 for “Sophie’s Choice.” In a spellbinding performance, Streep played a Polish woman who is haunted by her experiences in a Nazi concentration camp. It was a role she begged for, learning Polish and German to perfect her accent.

Then, just three years ago, in 2012, Streep took another Oscar home for Best Actress in “The Iron Lady,” where she portrayed former UK Prime Minister Margaret Thatcher. The biographical film centered on an elderly Thatcher who speaks to her dead husband and recalls scenes from her life.

Streep prepared for the role by watching months of Thatcher on video, learning her speech and mannerisms. And of course, she picked up a flawless British accent. The movie also won an Oscar for Best Make-Up.

Now, for Sunday night’s Oscars, Streep is set for a fourth Oscar as a Supporting Actress in the Disney fantasy movie “Into the Woods” that also stars Johnny Depp. She plays a witch who tasks a baker and his wife to bring her magical items and lift the curse on their family tree. Streep was drawn to the role, despite turning down other witchy roles over the years, because of composer Stephen Sondheim’s involvement.

Streep took film critics’ breaths away in the fantasy movie, singing two of the film’s more memorable songs and commanding the stage whenever she appeared.

She underwent a complete transformation into a gray-haired disheveled witch, a far cry from her stunning red carpet appearances.

The nomination makes her nineteenth, so even if she doesn’t bring this one home, Streep already has more accolades than any other actor in history.