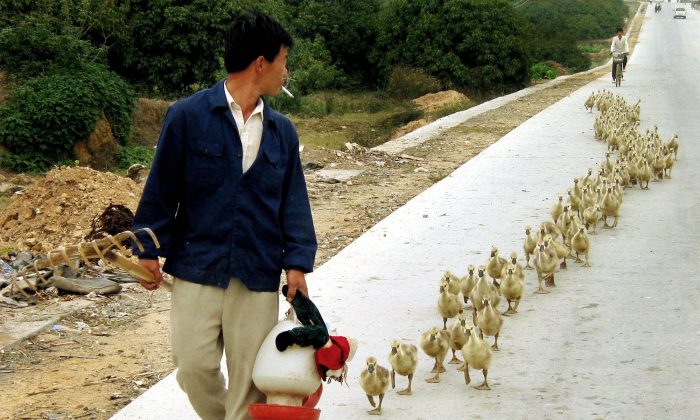 Ever more people are realizing the Chinese economy is in serious trouble. And with every major turning point in financial markets the people invested in the positive narrative have to come up with reasons why the bullish trend must go on.

In his blog “Gordon’s View,” McKinsey’s Gordon Orr (based in Shanghai) tries to sell us the Chinese transition to a consumer economy once again and brushes aside serious concerns about the stock market and the economy.

He did write a follow up post about some of the risks to his rose-colored scenario, but here are his four reasons why he still bullish on China—and why he is wrong.

Consumers Have Money and Are Increasingly Willing to Spend it

“With the stock market looking less attractive, good investment options are scarce, so why not spend a little more. With over US$9 trillion in the bank, according to JP Morgan, Chinese consumers certainly have the firepower to drive the economy forward.”

Orr is honestly telling us that investors who just lost $4 trillion in an epic stock market crash are willing and able to spend more? He must have never heard of the wealth effect or in this case the lack of wealth effect.

Well, Orr says the stock market is still up 30 percent over the last year. That’s true, but it’s down 50 percent since the peak in 2007 and it’s the long term which counts. On top, the Chinese stock market is “like a pig on LSD, you don’t know where it’s going to run,” according to Jim Chanos.

In addition, $9 trillion in the bank might not be a good thing if the banks’ assets the deposits for the future consumers are severely impaired. Last time a banking crisis came around in China, 40 percent of all loans went bad. This time around it’s not going to be much different.

As Michael Pettis puts it: [Very low interest rates] represented a transfer from net savers to net borrowers … They helped to exacerbate the split between the growth in household income (households are net savers) and the growth in GDP (which is generated by net borrowers).”

It seems Orr’s consumers have been holding the short end of the stick for some time and rate liberalization is still something we are waiting for.

However, Orr points out:  “The generation that is 25-35, where most of the wealth resides, has never known a recession. The experiences of their parents and grandparents of needing to save for bad times is just a history lesson to them, not personal experience.”

These fortunate people better watch out, they may have a very personal experience soon.

Consumer Spending Is Shifting to Services, and Could Grow a lot Faster if Supply Issues Were Fixed.

“As Chinese consumers place a greater value on their time, they are seeking better quality services to free up time for what they really want to do -and they are willing to pay for them. Consumers have historically held back from spending on services not only because they wanted to save, but also because what was on offer was not really worth spending on.”

Orr is right in saying services are growing fast and consumers are willing to spend more on movies and theme parks. However, were do the 48 percent of GDP in services really come from?

“A totally realistic set of improvements to China’s service sector could easily add $2 trillion to China’s GDP by 2025,” says Orr.

The Daiwa Institute of Research says: A totally realistic crash in investment spending could easily subtract $2 trillion from China’s GDP by 2020. Which estimate is going to be correct?

Capital is Substituting for Labor Almost Everywhere, Except in Government

“With slower growth, greater efficiency has become the priority across all businesses.  CEOs tend not to be looking to borrow more, or to invest more (overcapacity is common), nor are they looking to hire more. The message to management is how we get more from what we have. There is a lot of low-hanging fruit.”

Yes, absolutely. China has been wasting resources right and left and there is a lot of room for improvement.

But wait a second. Didn’t Orr just tell us that “Chinese consumers feel secure in their jobs,” and are supposed to drive the new consumption economy? But now, all of a sudden companies don’t want to hire anymore and instead cut costs?

It’s going to be one or the other, but not both at the same time.

On top, the wished-for improvement is wishful thinking according to Jim Chanos: “Returns on capital are trading down. Any entity that is growing rapidly but below its cost of capital is headed for an iceberg. Returns are less than economic.”

“Construction will remain a pillar industry in China. The need to upgrade China’s stock of residential housing and office space remains. Indeed, much of what was built only 20 years ago will soon need extensive refurbishment.”

That’s exactly the problem. Pretty much anything built in China needs to be torn-down after a few years and then constructed again. This will register as GDP growth, but is not economical, nor efficient, nor sustainable.

In the words of Fraser Howie: “They fundamentally cannot make bad projects good projects. If you built an apartment block in the middle of the desert and no one wanted to live there, you are going to lose money on your project. Even if you move people there, you are going to attract them by either subsidies or cheap rents, so therefore your financial return is going to be lower,” he said.

Yes, prices have stabilized after a sharp-drop starting in 2014, but only after the regime started goosing the market with some pretty drastic measures.

And didn’t Orr say most people already own a house and a car and therefore can spend more on services? “Most Chinese middle class own their own home and car now. They don’t need to save for these lumpy purchases.” Yes he did. So how can construction become a pillar of Chinese growth again?

At least Orr managed to get one thing right: By defying logic, he has perfectly emulated the Chinese economy.