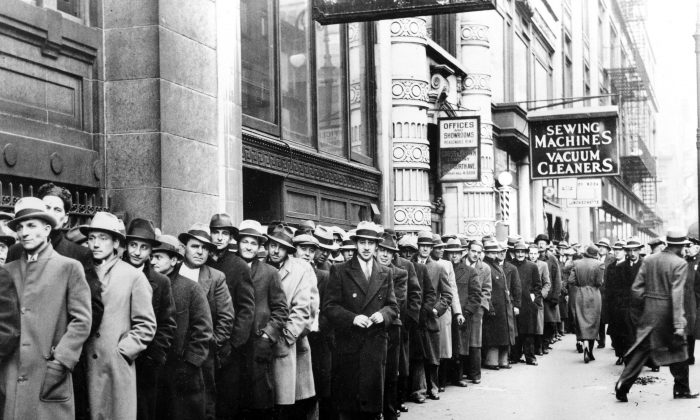 Unemployed people line up outside the State Labor Bureau in New York during the Great Depression on Nov. 24, 1933. Following the crisis, Western society was deeply influenced by the theories of Keynesian economics, which advocates active state intervention and regulation of the economy by using finance. (AP Photo)
Business Columnists

Why Keynesian Economics Is Destined to Fail

My colleague, Doug Kass, penned an interesting note suggesting that Keynesian economics will fail. To wit:

“At the core of the Keynesian theory is that the coordinated monetary and fiscal policies can stabilize economic output, inflation, and unemployment over the business cycle. As noted above, there are exogenous forces at work in this cycle which render policy ineffective.”

While Doug is correct in his statement, there’s a more significant reason why Keynesian economics won’t only prove to be a failure, but instead has failed already.

Debt Is ‘The’ Problem

There’s nothing wrong with the government spending money to provide for infrastructure, national security, communications, and other programs that can pay for themselves over time. The government can even fund those projects with debt, as the return on investment from revenue-producing projects pays for itself.

However, when debt is used for “nonproductive” purposes, such as social welfare, those dollars are diverted from productive activities to payment of principal and interest. As discussed in “Negative Multiplier Effect by Deutsche Bank’s Stuart Sparks:”

“History teaches us that although investments in productive capacity can, in principle, raise potential growth and r* in such a way that the debt incurred to finance fiscal stimulus is paid down over time (r-g<0), it turns out that there is little evidence that it has ever been achieved in the past.

Rising federal debt as a percentage of GDP [gross domestic product] has historically been associated with declines in estimates of r*—the need to save to service debt depresses potential growth. The broad point is that aggressive spending is necessary but not sufficient. Spending must be designed to raise productive capacity, potential growth, and r*. Absent true investment, public spending can lower r*, passively tightening for a fixed monetary stance.”

However, politicians always ignore the “other part” of the theory, which states that deficit spending should be cut and surpluses rebuilt when economic activity returns.

As shown, that has never happened, and for the past 40 years, economic participants have paid the price of slower growth and prosperity.

However, since Keynes’s model seems to have failed to produce the desired result, economists and politicians believe such failure is only because of the lack of “spending.”

Yet after $5 trillion of stimulus injections in 2020, economic growth is once again collapsing.

The desire to use “debt” to cure the “economic illness” seems logical, particularly when viewing it through the political lens of “getting reelected.” However, the “cure” keeps the patient on “life support.”

The policies enacted, be it stimulus, quantitative easing, or bailout programs, fail to create sustainable economic growth because they’re debt-based. Using debt to drag forward future consumption only leaves a void that must get filled in the future. Most importantly, the use of debt for nonproductive investments, such as a stimulus that has a one-time effect, is the debt service that then absorbs future revenues.

The view that “more money in people’s pockets” will drive up consumer spending, with a sustainable boost to GDP, is wrong. It hasn’t happened in 40 years.

What gets missed is that things such as temporary tax cuts or one-time injections don’t create economic growth, but merely reschedule it. The average American may fall for a near-term increase in their take-home pay, but any increased consumption today will be matched by a decrease tomorrow when the stimulus ends.

During the “Great Depression” period, most economists thought that the simple solution was just more stimulus. Work programs, lower interest rates, and government spending didn’t work to stem the tide of the depression era.

The problem today with surging debt levels, low rates, and weak economic growth is that the “economic transmission” system is broken. One of the essential drivers of economic activity are banks lending money to support economic activity. The bank loan/deposit ratio has collapsed along with velocity. As a result, there’s little benefit to loan money at ultra-low rates relative to the risk of default.

The proponents of Austrian economics believe that a sustained period of low-interest rates and excessive credit creation results in a dangerous imbalance between saving and investment. In other words, low-interest rates tend to stimulate borrowing from the banking system, which leads, as one would expect, to the expansion of credit. This expansion of credit then, in turn, creates an increase in the supply of money.

Therefore, as one would ultimately expect, the credit-sourced boom becomes unsustainable as artificially stimulated borrowing seeks out diminishing investment opportunities. Finally, the credit-sourced boom results in widespread malinvestments. When the exponential credit creation can no longer be sustained, a “credit contraction” occurs, which ultimately shrinks the money supply and the markets are finally “clear” which then causes resources to be reallocated back toward more efficient uses.

Unfortunately, as shown in the chart above, such hasn’t been allowed to happen yet. Each time an economic contraction has started the “clearing” process, artificial interventions have been used to stop that process. Unfortunately, the resultant outcome is weaker growth, widening inequality, and greater instability.

For the past 40 years, each administration, along with the Federal Reserve, has continued to operate under Keynesian monetary and fiscal policies, believing that the model has worked. The reality, however, has been that most of the aggregate growth in the economy has been financed by deficit spending, credit expansion, and a reduction in savings.

This reduced productive investment in the economy, and the economy’s output slowed. As the economy slowed and wages fell, the consumer was forced to take on more leverage, decreasing savings. As a result of the increased leverage, more of their income was needed to service the debt.

Secondly, most government spending programs redistribute income from workers to the unemployed. This, Keynesians argue, increases the welfare of many hurt by the recession. What their models ignore, however, is the reduced productivity that follows a shift of resources toward redistribution and away from productive investment.

Unfortunately, the actions being taken today have been repeated throughout history. Elected officials remain concerned about “satiating the mob with bread and games” rather than the short-term pain for the long-term survivability of the empire. In the end, every empire throughout history has fallen to its knees under the weight of debt and the debasement of its currency.

It’s time we wake up and realize that we’re on the same path.