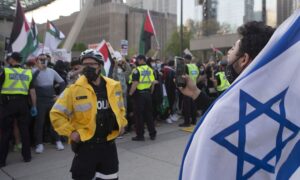 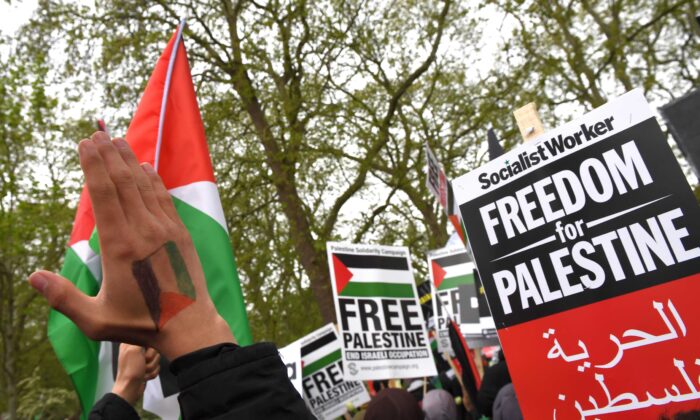 Protesters attend a rally to express solidarity with Palestine at Marble Arch in London, England, on May 15, 2021. (Chris J. Ratcliffe/Getty Images)
Viewpoints

Why ‘Justice for Palestine!’ Is Antisemitic

American leftists are becoming increasingly open about their antisemitism. On July 31, hundreds of “Pro-Palestine” demonstrators in Brooklyn stripped away all euphemisms with a call to “Globalize the Intifada.” A global intifada is a worldwide terror war against Jews. It’s also—by far—the most honest expression of what it would mean to achieve “Justice for Palestine.”

This tying anti-Jewish violence to the Palestinian cause is hardly new. Since Yasser Arafat launched his intifada in Jerusalem in late 2000, every outbreak of terrorism against Israel’s Jews has “motivated” simultaneous terror against Jews living elsewhere. Most recently, the war that Hamas launched this May grew to include attacks against Jews in New York, Los Angeles, Boston, and elsewhere.

Worse, this notion that Israel’s alleged suppression of “the Palestinian nation” excuses antisemitic violence is hardly restricted to a radical fringe. Prominent voices on the left tend to distance themselves from the violence while conceding the claimed rationale behind it.

When the 2008 Mumbai terrorists attacked several high-profile tourist spots plus a Chabad house, an op-ed in the leftist Guardian explained that “because the single surviving terrorist noted that they chose Chabad House to avenge the suffering of the Palestinians … the attack was anti-Israeli, though not necessarily antisemitic.”

When the 2015 Parisian terrorists targeted a Kosher supermarket along with the satirical magazine Charlie Hebdo, President Barack Obama lamented the misfortune befalling random people in a deli. Secretary of State John Kerry appreciated that there had been a “rationale” to the choice of targets.

This spillover from a Middle East conflict to a global war against the Jews is hardly coincidental. It was the explicit intent driving the 20th century imperialists, communists, fascists, and Pan-Arabists who created the entire notion of a distinct Palestinian nation.

That’s not to say that the Arab/Israeli conflict was fabricated. That conflict rests upon competing, valid, historically grounded claims. They are not, however, both national claims. That conflict always pitted an imperial Arab claim against a Jewish claim for self-determination.

A bit of history: When the fall of the Ottoman Empire appeared imminent, Arabs and Jews both petitioned the soon-to-be-victorious Europeans. In 1915, Sharif Hussein of Mecca, writing on behalf of all Arabic speakers between Egypt and Persia, sought British recognition of his rule over that entire area. In 1917, the Balfour Declaration agreed to Zionist aspirations for a Jewish homeland in the Palestine region, provided that it did not compromise the “civil and religious rights” of non-Jewish residents. The San Remo Conference of 1920 enshrined that Jewish homeland in international law.

Thus, a century ago, the Arabs forwarded a broad imperial claim that included Palestine; the Jews sought self-determination within Palestine. The European concern addressed the civil and religious rights of non-Jews within that Jewish homeland. No one—Arab, Jew, or European—suggested that a distinct Palestinian nation might find itself disenfranchised. That concern arose only later, as a bald attempt to stymie Jewish self-determination. It did not gain broad Western acceptance until the Oslo Accords of 1993.

The Israeli/Palestinian conflict rests in fiction. It’s a zero-sum game pitting ancient Jewish self-determination against a modern Palestinian identity created for the sole and explicit purpose of countering the Jewish claims.

The “Palestinian cause” has thus always combined the inner workings of an anti-Jewish hate movement with the outer trappings of a nationalist movement. Both the Palestinian movement itself and the allied “Justice for Palestine” movement remain far more concerned with destroying Israel and harming Jews than with helping Arabs.

Recent developments highlight the difference between a conflict grounded in history and a conflict grounded in hatred. The unspoken secret behind last year’s Abraham Accords is that Israel won the Arab/Israeli conflict. Self-determination defeated imperialism. As Arab leaders came to see their states as distinct rather than as parts of an inchoate empire, their opposition to minority self-determination beyond their borders softened.

The Israeli/Palestinian conflict is very different. Because “Palestine” exists solely to negate Jewish territorial claims, only one can survive. If that’s Israel, most of the Arabs consigned to bear the “Palestinian” label will integrate into countries around the region (including Israel). If Palestine rises in its stead, the Israeli Jews fortunate enough to escape its genocidal birth will find themselves scattered around the world.

It’s far beyond time to end the charade and the euphemisms. “Justice for Palestine” is a benign way of shouting “Injustice for Jews.” Though it might feel good to seek justice for all, it’s morally repugnant to balance the concerns of a hate movement against those of its targets.

The Brooklyn bigots deserve credit for their honesty. “Palestine” was founded as an antisemitic hate movement. That’s precisely what it remains today.