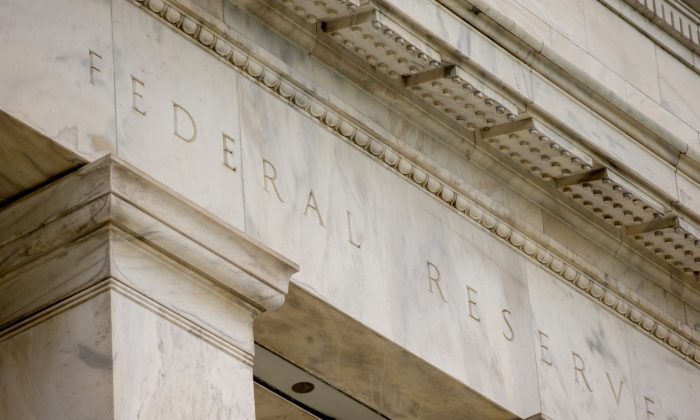 The Federal Reserve Board Building in Washington, D.C., on June 19, 2015. (Andrew Harnik/AP)
Opinion

Analysts and investors have been searching for clues as to whether Federal Reserve policymakers will begin raising interest rates when they meet next week. However, globalization makes that decision a lot less important than in years past.

Prolonged low mortgage rates push up land values in hot markets like Manhattan to levels not easily sustained when interest rates are normalized. And low rates encourage corporations to take on more debt—often to boost stock prices artificially by buying back shares.

As the Fed raises rates, both the domestic economy and global markets will push back.

Yet, as the Fed raises rates, both the domestic economy and global markets will push back.

In the second quarter, GDP grew at a robust 3.7 percent pace, but recent jobs data indicate a stronger dollar against Asian currencies is slowing U.S. manufacturing outside the auto patch, and Detroit is resorting to zero percent financing to keep its cars moving off dealer lots.

Overall, the economy is returning to moderate—though by historic standards hardly robust—economic growth, and can hardly sustain quickly rising medium- and longer-term interest rates, especially in the key auto and housing sectors.

Valuation Guru Says Dow Should Be Trading at 11,000

The Fed’s primary policy tool is to virtually set the banks’ overnight borrowing rate (the federal funds rate), which has been near zero since June 2008. However, the overall impact of Fed policy tightening depends much on whether increasing that rate significantly pushes up rates on mortgages, corporate and municipal bonds, and other longer-term borrowing.

Throughout the credit and bond markets, longer rates peg off the rate on 10-year Treasury securities but from June 2004 to June 2006, when Ben Bernanke increased the federal funds rate from 1 percent to 5.25 percent, the 10-year Treasury rate rose only 0.6 percentage points to 5.22 percent.

The Fed’s efforts to raise long rates and curb bubbles in real estate and equity markets, which ultimately precipitated the financial crisis, were frustrated by foreign capital inflows. In particular, the purchase of U.S. Treasury securities by the Peoples Bank of China and other Asian central banks seeking to maintain weak currencies against the dollar and boost their trade surpluses with the United States.

This time around, weakening economic conditions in Asia and growing doubts about Beijing’s ability to manage the world’s second-largest economy, have increased private demand for U.S. securities. Since early June, when Chinese investors began fleeing stocks on the Shanghai Exchange, the rate on 10-year Treasurys has fallen from 2.5 percent to 2.2 percent—despite repeated assertions by most Fed policymakers of their intention to begin raising U.S. interest rates soon.

As 10-year Treasury rates rise with any increase in the federal funds rate, foreign investors will have even greater incentive to move cash into Treasurys, pushing those rates back down again.

Ultimately the Fed will be frustrated in its efforts to significantly push up 10-year Treasury, mortgage and corporate bond rates and moderate the pace of home buying and corporate borrowing.

If they are crafty, non-bank firms that finance much of the new car buying, like GM Financial, will use longer-term bonds to keep auto loan rates from rising too much.

These days, the Fed is simply constrained by the weakness of the economic recovery and the globalization of capital markets.