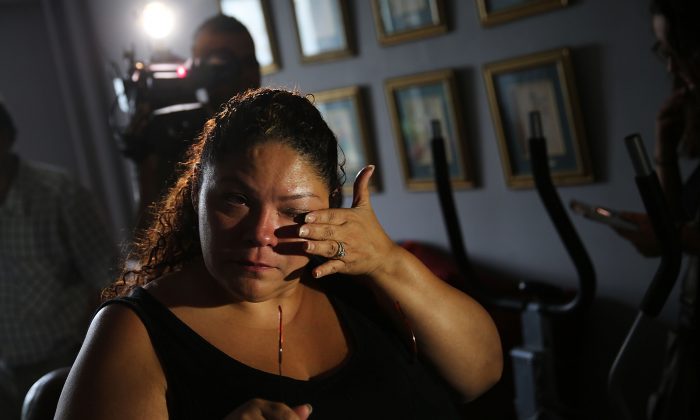 Carmen Ramirez, whose father Carmelo Quiles recently died of Legionnaires disease, pauses in her mothers apartment in an area of the Bronx which is the center of the outbreak on August 6, 2015 in New York City. (Spencer Platt/Getty Images)
New York

NEW YORK—Thirteen more people were diagnosed with Legionnaires’ disease in the Morris Park section of the Bronx. Although one patient has died, medical specialists are saying that the diagnoses itself should be seen as a good thing.

“It’s not an outbreak. It’s an outbreak of diagnosis,” said Janet Stout, a microbiologist who has researched Legionella, the bacteria that causes Legionnaires’ disease, for more than 30 years.

Legionnaires’ disease, a rare but severe form of pneumonia, had taken 12 lives and sickened more than 120 people in July and August during an unrelated outbreak in South Bronx.

But the increase of Legionnaires’ infections doesn’t necessarily indicate that more people are getting sick. It means more doctors are testing for it, showing a critical shift in the New York medical establishment’s attitude toward the disease that can potentially save many lives.

Legionella is a bacteria that is commonly found in the water supplies of large buildings. It doesn’t pose any danger to most healthy people. But it can be life-threatening for the elderly and people with weak immune systems. Since it is an uncommon illness, Legionnaires’ disease has historically been misdiagnosed as some other form of pneumonia.

The number of deaths caused by the Legionella bacteria is still unknown.  The Centers for Disease Control and Prevention (CDC) estimates somewhere between 8,000 to 18,000 people are hospitalized with Legionnaires’ disease each year in the United States, yet only about 3,000 cases are reported to CDC each year. The rest are misdiagnosed.

This is worrisome because according to the World Health Organization, Legionnaires’ patients who are diagnosed and treated early can fully recover with few side effects while those who go untreated after a week can face cognitive damage, organ failure, or death.

Sadly, outbreaks and deaths are what it takes to get people’s attention.
— Janet Stout, director, Special Pathogens Laboratory, University of Pittsburgh Swanson School of Engineering

Legionella.org, an advocacy organization run by Victor L. Yu, M.D., and Stout, Ph.D., believe that because of the severity of the malady, Legionnaires’ disease should be tested significantly more often than it is.

“Sadly, outbreaks and deaths are what it takes to get people’s attention,” Stout said.

Why It’s Difficult to Diagnose

Legionnaires’ disease is hard to diagnose because its symptoms—coughs, shortness of breath, high fever, muscle aches, and headaches—are similar to regular pneumonia symptoms.

Anyone with symptoms should seek care from a physician or go to the nearest emergency room, NYC Department of Health and Mental Hygiene Commissioner Mary Bassett has repeatedly said in press conferences.

People contract Legionnaires’ disease by inhaling contaminated water vapors; the bacteria infiltrates lung cells, grows, and causes inflammation throughout the lungs. The infection then expands to other organs.

“Antibiotics like penicillin can’t get inside that stuff,” Stout said. Legionnaires’ patients need very specific antibiotics, such as ciprofloxacin, that are capable of destroying bacteria deep inside cells.

There are physicians who have been reluctant to test for Legionnaires’ because it is a relatively rare disease.

There are two kinds of Legionnaires’ tests that doctors can give. One is a urine test that can provide results in 15 minutes. Another is a lab test that requires a one day turn around.

But there are physicians who have been reluctant to test for Legionnaires’ because it is a relatively rare disease. Pneumonia itself is not a leading cause in death.

According to the CDC, around 56,979 people died of influenza and pneumonia in 2013. That is about 9 percent of the number who died from heart disease that year.

Stout recommends that at-risk people who are experiencing symptoms should ask their doctors for a Legionnaires’ test anyway.

Since the Legionella bacteria grow and thrive in lungs, smokers and people with lung disease are at higher risk for contracting the illness. The elderly, organ transplant recipients, and those with a weak immune system are also at risk.

Critics, from Gov. Andrew Cuomo to the media, have recently reprimanded Mayor Bill de Blasio’s administration for being slow to disinfect cooling towers and delaying the release of information.

But in the larger scheme of things, the increase in diagnoses show that prevention tactics are working because doctors in New York are testing for Legionnaires’.

Moreover, survivors of the disease live to tell that New York City has not done such a poor job in containing Legionella after all.

In 2012, Lawrence Rushing felt disoriented and dizzy as he was on his way to give a talk in Cooperstown, New York. He got lost driving, and couldn’t find the building. This was rare for him.

Rushing, then a 74-year-old psychology professor at LaGuardia Community College, was not used to having a muddled mind.

“Legionnaires’ causes mental confusion,” he said. “It was the sickest I’ve ever been in my life.”

Upon returning to the city, Rushing tried to wait out the ailment. He thought it was a fever.

As Rushing was walking his dog near his home on the third day of his illness, he fainted. A neighbor took him to the hospital, where he was diagnosed with Legionnaires’.

He was discharged four days later. “I was pretty much okay after being discharged,” he said.

Upon leaving the hospital, Rushing returned to his classroom and gave an exam.

He said the New York City Health Department followed up with him and conducted extensive interviews.

“They were thorough,” he said. “They wanted to know every place I had been. I talked to them many times.”

This article was updated on Sept. 30 to reflect the increase of people diagnosed in the Morris Park cluster.