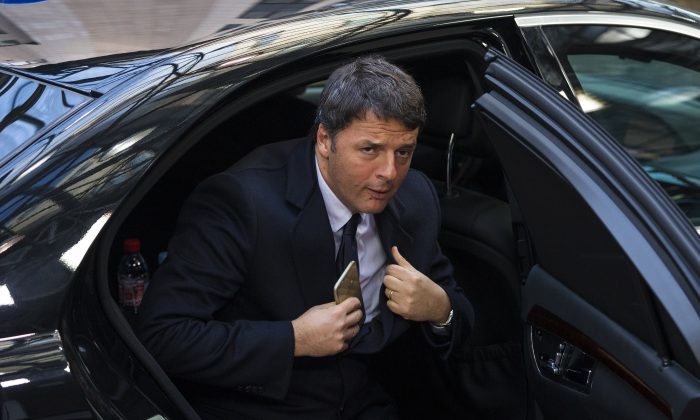 Italian Prime Minister Matteo Renzi arrives at the Council of the European Union on the second day of a two day summit in Brussels on Oct. 21. (Jack Taylor/Getty Images)
Europe

Why Italy’s Prime Minister Is Facing a Day of Reckoning

ROME—Marcello Tomassini, the former mayor of Castel Viscardo, a small town in central Italy, doesn’t mince his words when it comes to his appraisal of the country’s leader, Matteo Renzi.

“When I see him on the television, I switch channels,” he said. “He’s like a mini-dictator.”

In Tomassini’s mind, the ambitious, reform-minded 41-year-old’s reputation was tarnished the moment he became prime minister in February 2014, after using a combination of public pressure and party politics to elbow the mild-mannered Enrico Letta, the former prime minister, out of the way. Renzi took Letta’s office without winning a general election.

“One day Letta was there, the next he wasn’t. It shows [Renzi] has little respect for others, it’s all about him,” Tomassini said.

There is a perception that Renzi is a “one-man show,” a view that could hurt him in a Dec. 4 referendum that will decide whether the country goes forward with constitutional reforms he has advocated.

Polls are giving Renzi’s opponents as much as a 10 percent lead, and there are suggestions that the vote is no longer just about a constitutional overhaul, but about the man who has staked his leadership on winning the vote.

Polls on Nov. 18, the last allowed to be published ahead of the vote under Italian election-silence laws, indicate Renzi is heading for defeat. That outcome has raised fears of further calamity in a European Union already grappling with the U.K.’s pending exit. Some predict the populist party, the Five Star Movement, will seize power in the next election.

“I believe Renzi will lose,” said Giovanni Orsina, professor of political science at Luiss University. “If so, it will be an anti-establishment vote, mostly by young people and those living in the [poorer] south.”

Renzi’s constitutional reforms are intended to bring stability to a country that has had 63 governments in 70 years.

Italy is unusual in that it has two legislative chambers with equal power that can often find themselves at loggerheads over legislation. Passing laws can take years.

A key aim of the referendum is to drastically reduce the power of the Senate by cutting the number of senators from 315 to 100, and having them appointed by the government, rather than elected.

These changes would make the Senate less influential and make it easier for the Italian Parliament to pass legislation. Critics, however, say the reforms would remove checks and balances.

Renzi has pledged that the 500 million euros saved by the changes would go toward helping people in poverty.

Those who support the overhaul say it would make Italy more dynamic and appealing to investors.

Pier Paolo Baretta, an undersecretary at the Italian Economy Ministry, argued that a defeat would be a massive setback, while urging Italians to “use this opportunity for change.” He added that those opposing it “sought only to bring the government down.”

Other Renzi backers point to his achievements to date, including the so-called Jobs Act, which kickstarted the labor market, and the reduction of taxes for low income workers.

“He has been courageous,” said Pietro Reichlin, professor of economics at Luiss.“Other important reforms are happening, but it takes time for the impact to be felt. It doesn’t just happen in a day.”

But the gleam has worn off Renzi, the former mayor of Florence, who rode into the leadership on a wave of popularity.

EU counterparts praised him for quickly ushering in reforms that helped reignite, albeit mildly, a stagnant economy, and for bringing respect to Italian politics after the embarrassment of the Silvio Berlusconi era. But his moves have so far failed to impress a populace that has seen little or no improvement in its living standards.

Unemployment stood at 11.7 percent, one of the highest rates in Europe, as of September, while public debt is 133 percent of gross domestic product. Renzi’s reputation also took a turn for the worse late last year when thousands of people lost their life savings in a government rescue of four troubled banks.

The referendum became contentious when Renzi made it personal, saying in April he would quit if he loses.

Populists took advantage, with comedian Beppe Grillo, the founder of the Five Star Movement, seizing the opportunity to repeat his pledge to hold a referendum on Italy’s membership in the European single currency, the euro, should his party come to power.

Meanwhile, the far-right Northern League party, feeling emboldened by Brexit and the election of Donald Trump as U.S. president, has also pounced on public discontent to encourage its supporters to defy Renzi.

Renzi also has detractors within his own center-left Democratic Party. One is Miguel Gotor, a senator who has been busy campaigning against him. He argues that the reform would leave too much power in the hands of the premier. He also said the government’s priorities should be job creation and tackling bureaucracy and rampant corruption.

“We don’t need to take this path,” he said. “It has caused so much division, we need to try and unite. Italians should be the priority, not Renzi or the Democratic Party.”

He also dismissed the suggestion that a Renzi defeat would spark catastrophe, arguing that “it’s wrong to stir up this fear” and that backing Renzi “won’t necessarily stop the likes of Grillo.”

Reichlin said voters should consider the merits of the reforms, and not what they think about Renzi.

But time will tell whether their disenchantment prevails.