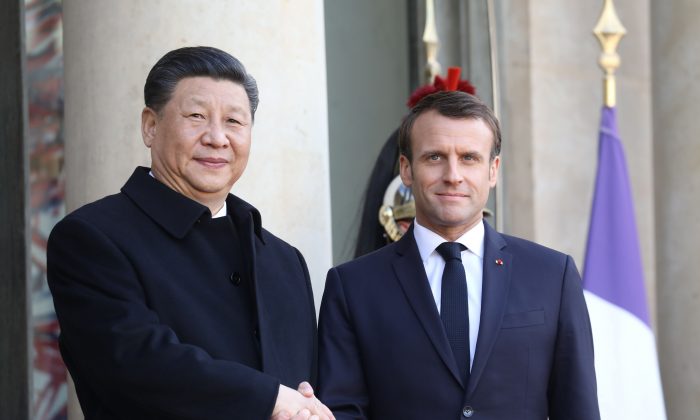 French President Emmanuel Macron welcomes Chinese leader Xi Jinping at the Elysee Palace in Paris on March 25, 2019. Xi was on a three-day state visit in France where he signed a series of bilateral and economic deals. (Ludovic Marin/AFP/Getty Images)
Thinking About China

Why Is This Major European Country Embracing China?

In December 2021, a number of countries, including the likes of Australia, the United States, and Canada, announced a diplomatic boycott of the Winter Olympics, which recently took place in China’s capital, Beijing.

More symbolic than significant, the countries sent a passive-aggressive message to the Chinese Communist Party (CCP). In short, human rights abuses are not okay. An uncontroversial statement, but one that needs to be repeated—strongly and forcefully.

French President Emmanuel Macron, however, had no interest in conveying this particular message. Instead, he chose to label the diplomatic boycott “insignificant.” France, he said, had no plans of joining Australia, the United States, and Canada.

But that’s not entirely fair on Macron. He has sent a message to China, which goes something like this: let’s work together.

On Jan. 3, as reported by Chinese state-run tabloid Global Times, “China and France pledged to deepen bilateral economic and financial cooperation during a virtual economic dialogue.” Officials, we’re told, “vowed to collaborate in areas such as finance, nuclear energy, aviation and environmental protection.” The fourth area is particularly amusing, considering China appears to be dedicated to destroying the environment, not protecting it.

The Eighth China-France High Level Economic and Finance Dialogue, according to the Times piece, “underscored pragmatic and resilient cooperation between the two countries at a time when some European countries adopted a hostile approach toward China.”

Now, ask yourself, why would a European country—like Lithuania, for example—adopt a hostile approach to a hostile power?

The answer to that question is painfully obvious. Again, in short, China is not to be trusted.

Both France and China, as The Times piece noted, have vowed to “support the applications of eligible French financial institutions to establish wholly owned securities firms in China.” This has all the makings of a marriage made in despotic heaven.

More recently, according to a Feb. 24 piece published by Deutsche Welle (DW), Paris and Beijing plan to penetrate the African continent, unveiling a number of significant infrastructures in the coming years. Not content with exploring the African market, the two countries also have plans to penetrate the South East Asian and Eastern European markets.

The skeptics, however (myself included), “suggest that it may simply provide an optical boost for Beijing in the face of growing conflict with the United States.”

In mid-February, Beijing and Paris signed the Fourth Round China-France Third-Party Market Cooperation Pilot Project List, which pledges to invest in other areas other than infrastructure, like the environment and renewable energy. The idea of the CCP helping to alleviate any environmental anxieties should be met with a healthy dose of skepticism—largely because the CCP’s environmental pledges don’t hold up to scrutiny. They never have, and chances are they never will.

Enterprises from both China and France, according to the authors of the release, “are complementary, and have a huge potential for third-party market cooperation.”

Eric K. Hontz, from the Center for International Private Enterprise, told DW that because the CCP has “a large presence in many Francophone areas,” it’s completely “natural that China and France should seek some sort of cooperation on infrastructure issues.”

What will China and France’s new partnership mean for France-U.S. relations?

Hontz doesn’t think the Beijing-Paris alliance “marks a dramatic shift in the relationship” between the two, traditionally close countries. Instead, he believes that the alliance between Paris and Beijing offers the French the opportunity “to continue to remain engaged and put itself, and its industry, forward into these markets.”

What Is China’s Goal Here?

After all, by teaming up with France, the fifth-largest trading nation in the world (and the second in the EU after Germany), China has a powerful ally, a respectable EU member that carries a great deal of power.

Of course, these questions, like most important questions, take time to answer. Nevertheless, when it comes to the CCP, ulterior motives always exist. Cloak-and-dagger machinations, and no shortage of smoke and mirrors. France, it seems, is yet another pawn in Beijing’s game of geopolitical chess.