Why Is the Democrats’ Bizarre IT Scandal Being Ignored? 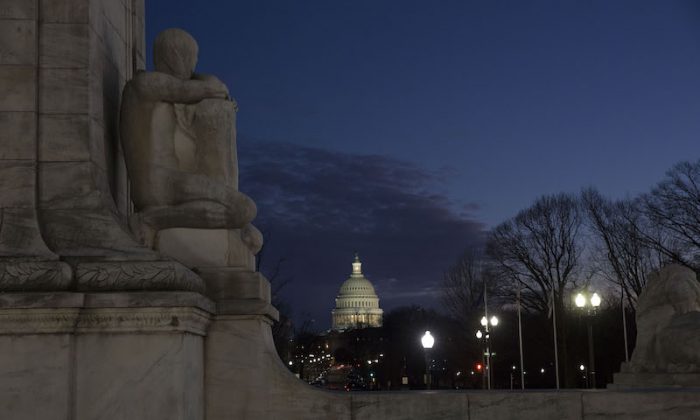 The Capitol building seen from the Columbus Fountain at Columbus Circle in Washington on Feb. 26, 2018. (Samira Bouaou/The Epoch Times)

While the focus in Washington remains centered on the Mueller Russia probe, we cannot lose sight of another ongoing investigation on Capitol Hill. At the center of this developing scandal are the nefarious actions of a former Democratic congressional IT aide indicted last year on bank fraud charges, who at the time was being paid by a high-profile member of Congress although he was barred from the House computer systems.

While the case has not received a lot of mainstream media attention, the details are sordid. Not only does the case raise serious national security and obstruction of justice concerns, it also suggests a blatant cover-up on the part of the lawmakers involved.

Our story begins in the early 2000s, when an IT contractor named Imran Awan began working for a number of House members. He was later joined in this work by seven other family members who had almost little or no computer technology expertise, including his wife and two brothers. One of Awan’s brothers, at 20 years old, was earning the same amount as a member of Congress. After being fired from one office for “incompetence,” the other congressional offices continued to pay him.

In February 2016, the House Office of Inspector General revealed that $120,000 in office equipment belonging to the office of Rep. Yvette Clarke (D-N.Y.) went missing. At the time, Imran’s brother Abid Awan worked for Clarke in an IT capacity and was believed to be involved in the equipment’s disappearance.

Later that year, the House Office of Inspector General informed both House leadership and the Committee on Administration that the Awans had gained unauthorized access into the servers of 15 House members who did not employ them! Additionally, it came to light that from October 2015 to April 2016, the Awans made “excessive log ons,” to the tune of 27 times per day, to a server belonging to the House Democratic Caucus.

In January 2017, a Democratic Caucus server was reported stolen.

Shortly after the Awans were barred from accessing the House computer systems in February 2017, many of the 44 House members—all Democrats—who gave the Awans access to their constituent and other office data fired them. One high profile member, however, continued to employ Imran Awan.

Rep. Debbie Wasserman Schultz (D-Fla.) employed Imran Awan from 2005 until he was arrested on bank fraud charges while attempting to flee the United States to Pakistan on July 25, 2017. Although Awan was barred from accessing House computer systems in February of that same year and unable to perform IT work for her office, Wasserman Schultz refused to remove Awan from House payroll and continued to pay him at the same rate. She compensated Awan with taxpayer funds for several months while he was under indictment for bank fraud charges.

Since Wasserman Schultz failed to answer even basic questions about the nature of Awan’s employment in her office, last July my organization asked the Office of Congressional Ethics to investigate her for blatantly disregarding House ethics rules, as members of Congress are directly responsible for ensuring their staff are only paid for official public work.

What makes this situation even more bizarre and troubling is that in April 2017, during the time Wasserman Schultz kept Awan employed, he left a laptop belonging to her in an abandoned public phone booth in the Rayburn House Office Building, along with “a Pakistani ID card, copies of Awan’s driver’s license and congressional ID badge, and letters to the U.S. attorney.” After this incident, Wasserman Schultz went on a public attack against the U.S. Capitol Police demanding they return her laptop, even publicly threatening Capitol Police Chief Matthew Verderosa with “consequences” if it wasn’t returned.

Then a few months later, she denied it was her laptop, saying “I have never seen that laptop. I don’t know what’s on the laptop.” The laptop’s username was “RepDWS.”

These are only some of the bizarre facts of this case. The victims have been described as 44 members of Congress, but are they? Taxpayer funds were used to purchase equipment and pay salaries. The data likely included private citizens’ information and government information. The members of Congress were entrusted with and expected to keep our government property and our data secure. The citizens are the true victims here.

It’s interesting that members of Congress always hold businesses publicly accountable when there is a high-profile breach of customer data, but in this case, they have failed to take action. To date, the Awans have not been charged with a single crime related to illegally accessing and stealing congressional computer servers as part of a sophisticated criminal enterprise.

Given what’s at stake here in terms of national security and the security of our citizens, our government must demand accountability, even in investigation-saturated and -weary Washington.

Kendra Arnold is executive director of the nonprofit Foundation for Accountability and Civic Trust (FACT), a nonpartisan ethics watchdog group. This article was first published on Fox News.