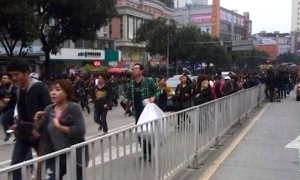 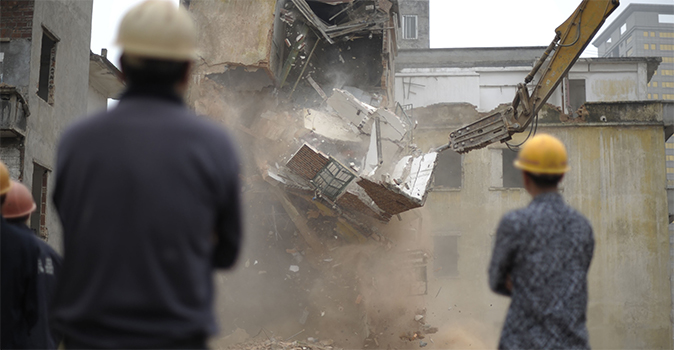 In this file photo, workers on demolition orders look at a construction being taken down in Yangji village, Guangzhou, south China's Guangdong province on March 21, 2012. (STR/AFP/Getty Images)
China

Why Is the Chinese Public Supporting a Killer?

Six years after a forced demolition left him homeless and destitute, 55-year-old Hao Jianzong has gotten his revenge by killing Cao Junxi, the man in charge of the wrecking operation.

Many Chinese Internet users have expressed sympathy, with some even hailing him as a hero.

On May 25, Hao hacked Cao to death with an axe and a knife in broad daylight near a bus stop in Xi’an, Shaanxi Province, Chinese media reported.

After the attack, Hao didn’t flee the scene, but asked bystanders to call the police, according to China Business News. When officers came to arrest him, Hao complied fully, saying he didn’t need handcuffs.

As China experienced the massive real estate boom that has been often touted as the most visible sign of the country’s meteoric economic progress, many of China’s poor became victims as wealthy land developers seized their land, typically for little compensation. Those who choose to defend their property rather than become homeless often meet with violence from construction personnel, hired thugs, or even the police working in collusion with the developers. The ensuing conflicts and their associated deaths and injuries have become a heated topic in public discourse in recent years.

In 2010, a farmer called Yang Youde defended his property from construction teams by launching homemade rockets from a guard tower.

Many see Hao Jianzong, who made a living as an illegal motorcycle taxi driver after losing his home, as a vigilante in an age where the law is often trampled on by those in power.

“When the law can’t bring justice, he took it into his own hands. Hao is a real man. I support you,” said a user called “Pingfan.”

An anonymous user from Xi’an said: “Hao must have been desperate, otherwise, who would wait for six years for revenge? Killing people is certainly wrong, but everything happens for a reason. Police must investigate what happened in the past, and tell people the truth!”

Others offered to donate money to support his family.

“Chinese people strongly resent the house demolition under the government, so Internet comments overwhelmingly support the house owner,” Du said, “There’s huge profitably in the demolition projects, and there’s no depth officials won’t sink to when it comes to this business.”

Housing demolitions have been the impetus for many deadly conflicts in mainland China. In the latest incident, which took place on May 29 in Sanya, south China’s Hainan Province, the town government arranged 200 men to demolish the houses of local villagers despite no agreement having been reached. Dozens of the local villagers protesting against the demolition were beaten and injured. More than 10 villagers were hospitalized and seven were arrested.

Locals indicated that the government didn’t agree to provide compensation following the demolition of the homes, which were built by local villagers with their own money.

In other disputes, house owners take extreme measures to protest against the demolition, such as self-immolation and other means of suicide.