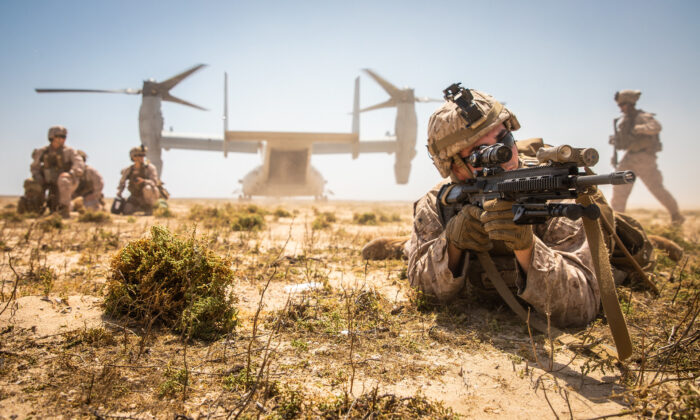 According to Chinese Foreign Minister Wang Yi, it is of prime importance that China and Saudi Arabia “maintain close strategic communication,” all in effort of solidifying the two countries’ “comprehensive strategic partnership.” Bilateral relations must be pushed to “a higher and deeper level.” Beijing, he said, wishes “to further synergize the Belt and Road Initiative with Saudi Arabia’s Vision 2030.”

Why should this alliance matter to readers around the world, including those based in the United States?

Because Beijing is doing all in its power to break the bond between Riyadh and Washington.

In October, as the researcher Simon Watkins noted, Beijing is making a concerted effort “to neuter US influence across the Middle East,” which, in turn, “accords with China’s plans to roll-out its multi-generational power-grab project—‘One Belt, One Road’ [BRI]—that would see it replace the US as the number one superpower across the globe.”

Since 2014, according to Watkins, when Saudi Arabia launched an oil price war with the specific intention of destroying “the US’ then-nascent shale oil sector,” the bond between Saudi Arabia and the United States has become increasingly shaky. Now China wants to destroy it.

Of course, one can argue that the bond between Riyadh and Washington should have been broken a long time ago. After all, 15 of the 19 hijackers involved in the 9/11 attacks were Saudi nationals. Osama bin Laden, al-Qaeda’s influential leader, was from a prominent Saudi family with close ties to the government. More recently, a U.S. intelligence report accused the Saudi Crown Prince Mohammed bin Salman of approving the murder of Jamal Khashoggi, a U.S.-based journalist.

The United States should have separated itself from Saudi Arabia many years ago. Now, though, the Saudis appear to be the ones filing for political divorce, turning toward China—the United States’ biggest rival—for support. Which begs the question, why is the Biden administration selling weapons to Saudi Arabia?

Selling weapons to Saudi Arabia, then, seems to contradict such promises. After all, this is a country where public floggings are a regular occurrence, where the number of executions are on the rise, where women are widely discriminated against, and where, according to the U.S. Department of State, religious discrimination reigns supreme.

On Nov. 4, the U.S. government agreed to sell $650 million worth of “Advanced Medium Range Air-to-Air Missiles (AMRAAM) and related equipment” to the Kingdom of Saudi Arabia. Also included, according to the statement, “are containers; weapon support and support equipment; spare and repair parts; U.S. Government and contractor engineering, technical and logistical support services; and other related elements of logistical and program support.”

Somewhat laughably, the report argues that the sale “will support U.S. foreign policy and national security of the United States by helping to improve the security of a friendly country [emphasis mine] that continues to be an important force for political and economic progress in the Middle East.”

This “friendly” country is no friend of democracy, and it’s certainly no friend of human rights. It is, though, a close friend of China. Right now, Huawei, a company with close ties to the CCP, is busy helping the Saudis create “smart cities,” which will turn the Middle Eastern country into a surveillance state.

In an interview with Economic Times, Camille Lons, a surveillance and security expert, said Saudi’s “use of technologies for population surveillance is closer to the practices of China than those of Western countries.” Her sentence describes a trend that is occurring across the Middle East.

In fact, the sinification of Gulf countries is well under way. China already exercises a great deal of influence over countries like Egypt, the United Arab Emirates, and the aforementioned Saudi Arabia. For what it’s worth, the Biden administration has sold weapons to all three.

The United States must take a stand and refuse to sell weapons to countries that oppose democratic norms. In other words, it must refuse to do business with countries that reflect the CCP’s values. The chances of that occurring, though, are almost nonexistent.