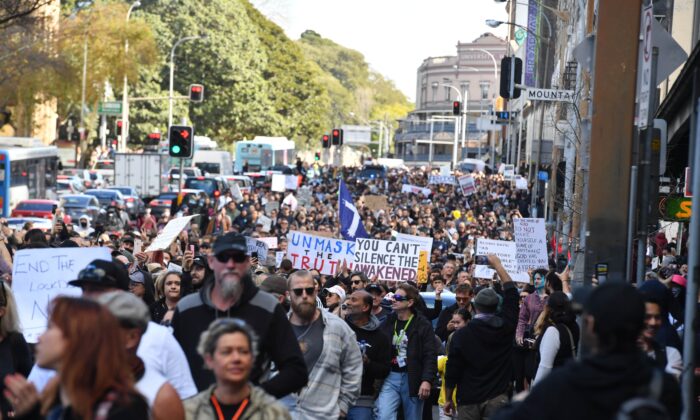 Why Is the Australian Government Behaving Like the Chinese Regime?

Australians, we’re told, value honesty and humor; they loathe pretentiousness. This perhaps explains why Australia fell out of love with China. The Chinese Communist Party (CCP) is known for many things, but most definitely not modesty, humility, or a sense of humor.

In March of last year, Australian Border Force (ABF) intercepted a number of deliveries from mainland China; these included faulty masks and other personal protective equipment kits. One month later, Australian Prime Minister Scott Morrison called for an investigation into the origins of COVID-19. The CCP, not surprisingly, rejected Morrison’s call. Tensions between the two countries intensified, with the CCP suspending imports from Australia’s four large red meat abattoirs. Nevertheless, the Australians managed to weather the storm. The CCP’s particular brand of economic coercion failed to work.

As those in Canberra form closer ties with India, one of the fastest emerging economies in the world, it continues to separate itself from all things China. This, of course, should be celebrated. However, there is a profound paradox at play here: The more Canberra parts ways with Beijing, the more it mirrors Beijing’s behavior. I call it the “parting paradox.” The further the two separate, the more they mirror each other.

How a Liberal Democracy Dies

One of the cornerstones of democracy is freedom. The current virus-related restrictions in Australia are, for a lack of a better word, extreme. Even the aforementioned Morrison admits that this is no way to live. Thankfully, the Australian government recently announced plans to drop its “COVID zero” strategy. Most restrictions will be lifted once 80 percent of the population is vaccinated, which, according to The Economist, “looks achievable by the end of the year.” This is indeed no way to live, yet most Australians will have to live this way for the rest of the year—and quite possibly well beyond that. After all, Canberra’s vaccine rollout has been deemed a “colossal failure.” By robbing people of their freedom, those in Canberra have failed the country. An increasing number of Australians are taking their lives, and draconian measures will only serve to make things worse. A father was wrestled away from his daughter for the “crime” of not wearing a mask. A man who was exempt from wearing a mask, due to a medical condition, was handcuffed and then suffered a heart attack. Let the people live in peace. This is Australia, not China. Right?

Robbed of Freedom, Robbed of Data

Not only are Australians being robbed of their personal freedom, they are also being robbed of personal data. In the final days of August, the Australian Senate passed the “Surveillance Legislation Amendment (Identify and Disrupt) Bill.” After passing both houses of federal parliament, the bill now gives law enforcement unprecedented levels of power to spy on suspected criminals online. Rather worryingly, the Australian Federal Police and the Australian Criminal Intelligence Commission have the power to do the following three things:

The word “suspected” is in italics for a very specific reason. Imagine living in a country that allows law enforcement agencies to hack into a citizen’s phone and modify or delete data. Now, imagine all the ways in which people could be shamed, not to mention framed for crimes they never committed. Imagine all the ways in which incriminating “evidence” could be placed on a citizen’s phone. Anyone, in theory, can be labeled a suspect. You might argue that all countries spy on their citizens. This may very well be true, but at least most elected leaders have the decency to tell their citizens otherwise. The Australian bill was passed with high levels of support. What message does this send to the Australian people? Your privacy does not matter.

When citizens are told virus-related restrictions are for their own good, they should always read between the lines. Are they really for the benefit of broader society, or are they serving some other, all too nefarious goal? Although Australia is most certainly not China, officials in Canberra are certainly behaving like officials in Beijing in this situation. This should concern us all, especially those who find themselves locked up indefinitely.

John Mac Ghlionn
Follow
John Mac Ghlionn is a researcher and essayist. He covers psychology and social relations, and has a keen interest in social dysfunction and media manipulation. His work has been published by the New York Post, The Sydney Morning Herald, Newsweek, National Review, and The Spectator US, among others.