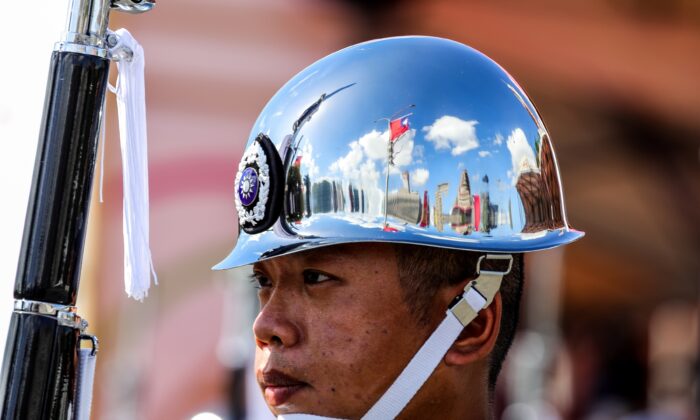 A Taiwanese flag is reflected on the helmet of one of the Ministry of National Defense Honor Guards during the National Day celebration in Taipei, Taiwan, on Oct. 10, 2021. Taiwan President Tsai Ing-Wen said the island is facing unprecedented challenges and will defend its sovereignty, pushing back after Chinese leader Xi Jinping declared a day earlier that unification will be achieved. (I-Hwa Cheng/Bloomberg via Getty Images)
Thinking About China

Why Is Taiwan a Mortal Threat to the CCP?

Most of the world knows that the Chinese Communist Party (CCP) has a psychological animus against Taiwan. Why would the CCP want to erase the existence of the independent democratic country of Taiwan?

The CCP fundamentally fears that Taiwan will be, like the Chinese proverb states, the “single spark that can start a prairie fire.”

Taiwan is more than a flourishing democracy. First and foremost, Taiwan is an ideological threat to the CCP. Taiwan represents a country where the individual is the ruler or the sovereign, and the government serves the people. This idea is clearly stated in Taiwan’s Constitution: “Sovereignty of the Republic of China shall reside in the whole body of citizens.”

In China, sovereignty resides in the Party: the CCP is the ruler, and the people serve the Party. This type of thinking is no different than how the masses were treated under the Chinese emperor or the serfs of Europe.

Taiwan is geographically close to China—Formosa is about 100 miles from mainland China. Some of Taiwan’s islands, such as the Kinmen islands, are only a few miles from the Chinese port city of Xiamen.

With travel usually allowed between Taiwan and China, the ideological infection that Taiwan represents terrifies the CCP. In 2019, over 2.5 million Chinese citizens visited Taiwan, and before the COVID-19 pandemic, an average of 6 million Taiwanese citizens visited China each year.

To nip this ideological threat in the bud, the CCP uses extensive measures through its United Front and the People’s Liberation Army (PLA) media, psychological, and legal warfare departments to counter the ideological threat.

Regardless of relentless ideological attacks against Taiwan, the idea of democracy and individual freedom continues to spread throughout China. Examples of activities in favor of democracy include the following: the deadly demonstrations in Tiananmen Square in 1989, where (an estimated) 10,000 people were massacred; the brutal suppression of protests in Hong Kong; the severe oppression of the Falun Gong movement. These examples demonstrate that the CCP constantly struggles to maintain its oppressive totalitarian rule.

Of course, CCP propaganda ignores protests against the regime, and Beijing wants its citizens and the rest of the world to believe that the CCP has rendered a “miracle” in transforming its country—as if the communists had such a word in their anti-religious vocabulary.

After the fall of the Qing Dynasty in 1912, two types of government emerged: democratic and communist. Ironically, each of these government types is based on Western ideologies.

For Taiwan, the shift to democracy is enunciated in the constitution’s Three Principles of the People: “… shall be a democratic republic of the people, to be governed by the people, and for the people.”

The idea of equality is reinforced throughout the constitution, as the following selections demonstrate:

Article 7: All citizens of the Republic of China, irrespective of sex, religion, ethnic origin, class, or party affiliation, shall be equal before the law.

Article 11: The people shall have freedom of speech, teaching, writing, and publication.

Article 12: The people shall have freedom of privacy of correspondence.

Article 13: The people shall have freedom of religious belief.

Article 14: The people shall have freedom of assembly and of association.

Article 16: The people shall have the right to present petitions, lodge complaints, and institute legal proceedings.

Article 17: The people shall have the right to election, recall, initiative, and referendum.

The above list of freedoms is antithetical to the CCP’s hold over the people in the mainland. For example, freedom of speech is denied under the CCP. Anyone holding “divergent” views is subject to harassment, prison time, and even torture.

The CCP has created the dystopian hyper-technological version of “Thought Police” described in George Orwell’s “1984.”

The CCP denies all freedoms listed in the Taiwanese Constitution to the people of China.

Who Does the Military Protect and Defend?

According to Articles 138 and 139 of the Taiwanese Constitution, the Armed Forces’ purpose is to protect the people; it is above party affiliation, and it cannot be used as an instrument for individual or party power.

The Taiwan military oath states, “I do solemnly and sincerely swear that I will be loyal to the nation, safeguard the security of the State.”

This apolitical structure of Taiwan’s military is opposed to how the CCP has constructed its power structure. The PLA’s purpose is to protect the Party. The PLA’s oath of office includes the following: “I promise that I will follow the leadership of the Communist Party of China.”

Each of these rights and freedoms represents moral and mortal spears to the CCP, which one should hope, will liberate the Chinese people from the dictatorship of the Party.

Taiwan’s democratic principles can achieve Sun Tzu’s ultimate goal in warfare against the CCP: “The supreme art of war is to subdue the enemy without fighting.”