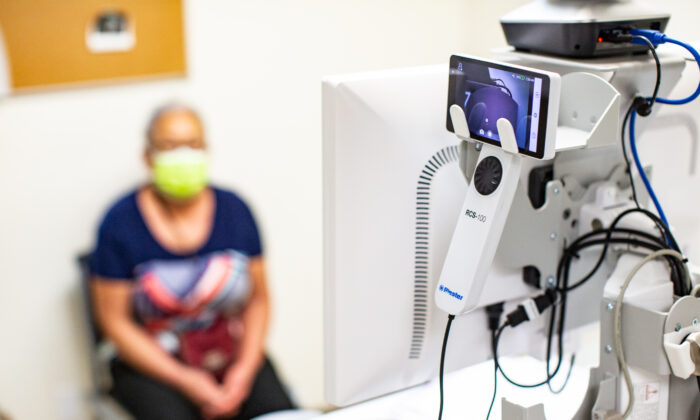 A patient at the Lestonnac Free Clinic talks with a doctor about her health issues using a telemedicine machine in Orange, Calif., on June 21, 2021. (John Fredricks/The Epoch Times)
Viewpoints

Why Is Free Health Care for the Poor Not Enough for California Progressives?

The California legislature is considering a proposal to implement single-payer health care in the state. “Single-payer,” of course, is a euphemism for government-run health care. The single payer is the government.

Most people don’t want the government in control of our health care. By calling it instead “single-payer,” it sounds simpler and more efficient. However, nothing could be further from the truth.

History tells us that the private sector is more efficient than the government in running just about everything. The government is a monopoly, known to be a bad thing for free markets. And when government is in charge, government corruption necessarily follows.

Nonetheless, Gov. Gavin Newsom has repeatedly stated his support for single-payer health care. Thus far, he has been unable to implement it. The proposal’s author, Assemblyman Ash Kalra, says inaction is “the cruelest of actions, while millions suffer under our watch.”

Most Americans believe the government should provide a “safety net” for the poor. It does this with assistance such as food stamps. However, you don’t hear anyone calling for an expansion of food stamps to cover all Americans regardless of whether they are rich or poor. Like with food stamps, California already has health care support in place for the poor.

Because of Obamacare, it also has another 50 percent of Californians covered on employer-provided plans. But for the Democrats, this isn’t enough. They insist on providing free health care for every single American, old and young, rich and poor. And to achieve it, they propose huge tax increases in a state that is already among the highest-taxed states.

This includes a new tax on businesses equal to 2.3 percent of any annual gross receipts in excess of $2 million, a new payroll tax for employers with 50 or more employees at a rate of 1.25 percent of total wages, and a 1 percent payroll tax for employers with workers earning more than $49,900 a year. Personal income taxes would be raised for salaries above $149,509 a year, beginning with an increase of 0.5 percent and increasing to 2.5 percent for salaries above $2.5 million.

All these extra taxes, and yet not a single additional poor person will be insured under the plan. So, one must wonder, what is this really all about?

It certainly wouldn’t solve the problem of runaway health care costs, which have only gotten worse since the implementation of Obamacare. There is no menu of services with prices at the doctor’s office. People don’t care what the cost is because they don’t pay it. The government and insurance companies are in the middle, determining what and how much to pay, but never sure about what services the doctor or hospital actually provided.

But history shows that if government would get out of the way and allow the free market to do its thing, there’s no telling what solutions would emerge for health care. New technologies utilizing the internet and artificial intelligence could be fully exploited. Competition would bring down prices, as we have seen in areas of medical care not covered by the government or insurance companies.

Sen. Bernie Sanders (I-Vt.) loves to complain that America is “the only major country on Earth that does not guarantee health care to all people.” America also is the richest country on Earth. Has he ever considered that the two may be related? It is precisely because America doesn’t hand over control of large sectors of its economy to the government that we have had such economic success.

But we know by now that the progressive playbook involves destroying free markets wherever possible. This is especially true when it comes to health care, as they find it abhorrent for companies to make money off people’s medical condition. Never mind that the profit incentive has proven to be the greatest catalyst for advances in medicine and every other sector of the economy. Progressives are also obsessed with equity. They want everyone to get the same thing regardless of wealth.