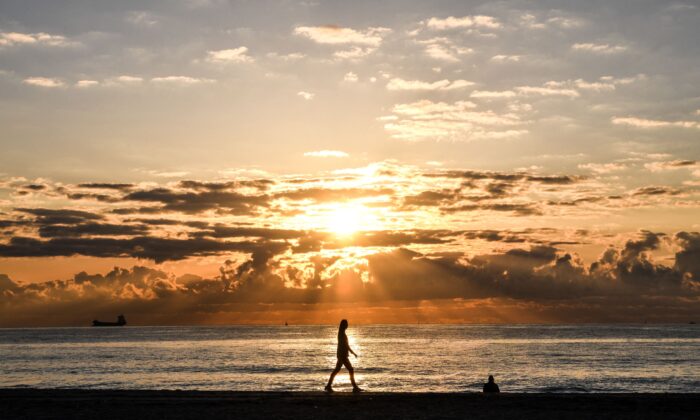 A woman walks during a sunrise on the beach in Miami Beach, Fla., on March 23, 2021. (Chandan Khanna/AFP via Getty Images)
Viewpoints

Why Is Everyone in Florida So Happy?

For six years, Florida has led the nation in net migration into the state, with New York and California losing the most residents. COVID craziness accelerated the trend dramatically.

The governor of Florida, Ron DeSantis, made some lockdown errors early on—for which he actually apologized—but then opened up completely more than two years ago. He mastered the actual science and decided to put freedom first. It’s led to a huge payoff for the whole state.

The national news media screamed in horror and predicted a mass death (#deathsantis trended on Twitter) that never came. Florida and California have roughly similar outcomes on COVID in particular even though they had opposite policies. This is because stringencies did not make a lick of difference in how the virus attacked the population.

The big difference concerns culture and enterprise. Now the state is teeming with new residents. The level of prosperity one senses here—a prosperity that benefits everyone—is a striking contrast to New England, which still suffers massively from its dreadful errors of lockdowns and mandates.

The educational losses among school kids were minimal. Businesses recovered quickly. Enterprise was never fundamentally traumatized. Public health suffered very little because the medical system got back to normal operation quickly. Masks are very rare in the state today, unlike New England which is still swarming with frightened citizens hiding from a virus.

It seems like every third person you meet in Miami is a new resident, and grinning from ear to ear about the decision. Many of these people were driven out of California, New York, Massachusetts, Connecticut, and other lockdown states out of pure exasperation. The lockdowns were grim enough but the mandates finally made the decision for hundreds of thousands of people.

Why live in a state where the government has no respect at all for freedom and rights? It makes no sense. Meanwhile, in Florida, the governor aggressively advertised its high regard for freedom and took active measures to drive the COVID police out of the state, even going so far as to ban mask mandates in school.

For many who made the move, it was a very difficult decision. In so many ways, this country, despite its vastness and lack of travel restrictions, is still very parochial. Many residents of Western Massachusetts have never been to New York, much less visited the South. It’s true of California too. This tendency sustains a form of geographic bigotry.

I was living in New England when Florida and Texas opened fully in quick succession in August 2020. The attitudes I encountered were truly shocking. The people of New England regarded the open states as clearly disease-ridden and the governors as right-wing rubes who cared nothing about death and suffering. The policy splits in the states exacerbated regional biases, so that people in New England imagined themselves to be clean and virusfree while in primitive spots in the South, the disease circulated unchecked.

You sense it when reading the antique New York Times: journalists report on this place as if it were Mars.

This bias was intensified once the Biden administration went on the warpath against the unvaccinated. They did this in part and precisely because doing so would encourage hatred and loathing of Red states that supported Trump. It wasn’t enough that the Biden administration opposed their politics; he had to take it a step further to announce to a nation that they were unclean disease spreaders too.

It’s all so embarrassing really. What the New Yorkers who uprooted themselves discovered upon moving to Florida was glorious. They found sunny days, prosperous cities, one of the most beautiful skylines in the world in Miami, beaches everywhere, palm trees galore, a massively diverse but wholly integrated population, much lower prices for everything, arts and music, plus smiling people with a beautiful service ethic.

Not one of my friends who made the move to Florida regrets it. They wonder why they waited so long! They look at the gleaming city, enjoy the active nightlife, luxuriate in the music and arts scene, get to know beaches that are actually warm and wonderful, and feel astonishment that they ever delayed making the move. Truly, compared with dirty and dreary New York City, to say nothing of beaten and weary Boston, Miami has the feel of heaven on Earth.

Florida leads the nation right now in business creation but apart from the economics of the situation, the culture exudes health and optimism. The reason: the residents did not suffer two years of abuse by the government. This tends to be good for the human spirit.

Truly, the future of economic growth in the United States does favor the South in general. There still persists the opinion that the Northeast is the place to be for ambitious people but how much longer can this really last when it is no longer true?

Air conditioning was first installed at the New York Stock Exchange in 1902 but by the late 1940s, it had spread across the country. The invention itself caused a dramatic shift in the livability of the South. No longer was there any downside to migration, and today the best air conditioning systems in the world thrive in the hottest regions like Florida.

Reflecting on the implications of this, one realizes that it is only for reasons of travel and cooling technology that the center of American culture ended up in Boston and New York rather than Miami or Dallas. The shock of lockdowns have caused millions to rethink everything and flee the stagnated despotisms of the Northeast (New Hampshire excepted of course) and test out what freedom feels like in Florida.

The cultural and economic contrast could not be starker. That suggests that the trends will continue in just this direction, as entrenched Blue state interests continue to drive their economies into the ground and cut off opportunities for their people. So long as Americans have the freedom to move, they will gradually migrate from less free states to more free states like we see in the South and West, while eschewing the taxes and controls of the old world.

As a final note, and perhaps the most striking feature of Florida today, is that visitors encounter something that is missing in many parts of the country today: happy people. Smiles. Manners. Joy. Trust. Exuberance. Optimism. These things are infectious, and as difficult to measure as they are obvious to first-time visitors. It’s no wonder that so many people have made the move. The nation’s cultural and economic gravity has shifted. Florida today feels like the future.