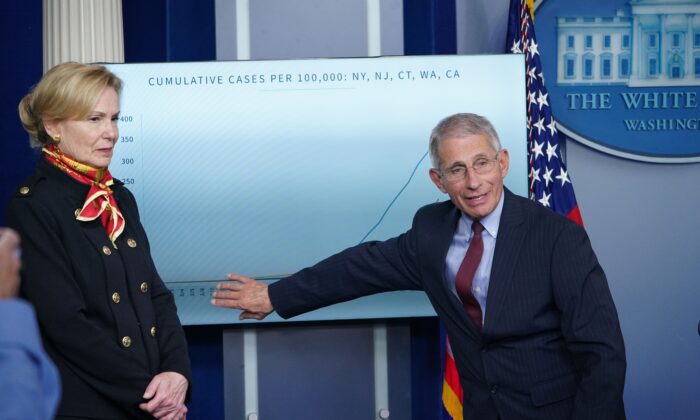 Response coordinator for White House Coronavirus Task Force Deborah Birx (L) looks on as Director of the National Institute of Allergy and Infectious Diseases Anthony Fauci speaks and points to a graphic during the daily briefing on the CCP Virus and COVID-19, in the Brady Briefing Room at the White House in Washington on March 31, 2020. (Mandel Ngan/AFP via Getty Images)
Business Columnists

Why Is Economic Science So Isolated?

In Deborah Birx’s revealing book (“Silent Invasion”) on her role in the pandemic response, she continually pits public health against economic concerns. The opposition to lockdowns within the White House came entirely from the economics team. It drove her nuts.

“I saw the economic consequences as a ‘tomorrow issue,’ while human life was a ‘today issue,’” she wrote.

And what is that economic concern? The stock market. The GDP. Dollars and sense. Making profits. Greed. You see how this goes. To her mind, she was saving lives through lockdowns, so the matter of making the big bucks would just have to wait. To all those who want to keep the cash nexus flowing, her opinion was that they would just have to wait a bit.

As the book proceeds, she lets her anger at the economists rip.

“It wasn’t a question of economic vitality, but of individual lives.” And as she lost the confidence of the president in April 2020, and thus her direct power over the president (but not the media or country), her bitterness really shines through:

“Though he’d be keeping Tony [Fauci] and me on board as the lone survivors of the public health wing of the disbanded task force, the economic wing would be getting not just the green light, but the keys to all the cars and permission to detour around the unpleasant realities of the pandemic—all to get to the Promised Land of a revitalized economy.”

This mentality sees the economy as a giant casino that its managers can open or close at will with no great consequence. The revenue you lose today you can make up tomorrow. In this simplified perspective, it’s too easy to forget about supply chains, small businesses, the service industry, food and energy, and even health care delivery.

The vast and global matrix of exchange that makes up the global market is caricatured as nothing but an engineering project that can be put on hold.

It might seem like a moral position, but only if you separate economics from human life. This is wrong. Economics is a human concern that is bound up with the whole experience of life on earth. It can’t be shelved. For that matter, the delivery of health care itself cannot be separated from economics, as events would soon reveal.

Governors from all over the country complied with Centers for Disease Control and Prevention directives and ordered hospitals to end elective surgeries with a priority for COVID patients. The problem presented itself immediately: hospitals all over the country emptied. The staff made dancing TikTok videos to pass the time, but eventually more than 300 hospitals furloughed nurses. It was an enormous error, one that surely cost many lives.

In those early days, however, the economics team at the White House took a back seat. They were forced to. Every time they spoke up about collateral damage and with doubts that lockdowns would achieve anything to mitigate against the virus, they were dismissed and caricatured. Meanwhile, economists outside the White House were largely silent. A survey in the spring of 2020 among top economists reported overwhelming approval of the lockdowns and silence otherwise.

I recall this all too well, as I expected my heroes in the economics profession to rise up in vocal opposition to the utter wreckage of market freedom and property rights. To my shock, most of them stayed silent, or worse: Some even joined in the lockdown mania. Then, I knew it: These people had outstanding training in some areas, but few had ever studied the history of infectious disease or knew the first thing about virus trajectories, much less had a working knowledge of cell biology. They were as ignorant on these topics as they were of astronomy.

As a result, they came to believe that virology and epidemiology were outside their wheelhouse. They specialize in other things, not disease mitigation. So most of them acquiesced and let public-health professionals have their way. It’s all about staying in one’s lane, just as modern academia trains people to do and just as Big Media and Big Tech shames people if they don’t.

This highly sectorized thinking caused grave damage throughout the pandemic. Economists had mischaracterized public health, and public health had other-ized economics as a tomorrow concern. As a result, disaster ensued, and many months went by during which time life as we knew it came to be unraveled by force.

The two people who ultimately exercised profound influence in reopening and essentially saving the world were Drs. Scott Atlas and Jay Bhattacharya. Atlas had medical and scientific training, and had written several books on public policy that explored the intersection of both disciplines. Bhattacharya had earned a doctorate in economics and also a medical degree. These two thinkers were and are unique in understanding that the separation between “money and lives” is really artificial. Both disciplines deal with human life, choice, constraints, and tradeoffs.

They were also fearless in weaving the two concerns together. Economics isn’t an engineering project. It deals with the pith of life itself. The same is true of public health: poverty and desperation lead to death just as sure as a fatal virus. It isn’t possible to reflect on one without including concerns of the other.

This incident really does speak to a larger problem. The economics profession today is too isolated. It’s largely ignored until the next economic crisis arrives, which happens every 15 to 20 years or so. Suddenly, they are all over television. So irrelevant are they otherwise that in the 1990s, the Clinton administration had to post signs around the situation room saying “It’s the economy, stupid,” or else it was too easy to forget.

We are in such a period right now. The U.S. dollar has lost 13.5 percent of its value since the lockdowns began, which is another way of saying wages are falling, stealth taxes are rising, and savings are being robbed.

Suddenly, the economists are on display to explain what to do about it, while the public health people are scrambling to find some other disease on the loose to regain their public profile. They are in competition with the climatologists who are being enlisted to address climate change, even as media venues continue to call on the mogul class led by Bill Gates to weigh in on everything in hopes of grants from his foundation.

Say what you want to about the scholastics of the late Middle Ages; at least they knew there was a unity in truth. As a result, they studied everything, always seeking interrelationships between disciplines. It was in this period that the discipline of economics was born, not as a branch of engineering or technology, but as a path to understanding how human lives can thrive and to examining forces at work in the world that makes that possible.

It’s not that every intellectual needs to have universal knowledge of everything; they should have just enough to keep from being bamboozled by the fake expertise of others.

Even now, the literature of the 18th century offers tremendous insight. Adam Smith wrote one book on economic forces and another on norms, morality, and human community. His whole generation of intellectuals cross-pollinated their ideas. They saw learning from everyone as a moral obligation.

Public health intellectuals simply can’t provide guidance for the way forward while sectorizing and dismissing economic concerns as merely a matter of dollars and cents. At the same time, economics as a discipline can’t be expected to make a large contribution to human understanding while pretending as if ignorance of basic matters of health and well-being are totally irrelevant to their task.

These disciplines need each other.

Intellectual isolation of any sort, especially when it’s wedded to government power, gives birth to dangerous myopia and fanaticism. The careers of Birx and Fauci illustrate this point perfectly.