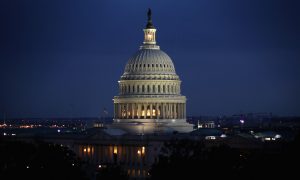 Destroying Our House by Our Own Hands: Review of 'Sabotage' the Movie and Book 'Marxianity'
0
Share Now
TelegramFacebookTweetEmailTellMeWeReddit
Copy Link

People line up outside of the Social Security Administration office in San Francisco, Calif., on Feb. 2, 2005. (Justin Sullivan/Getty Images)
Viewpoints

Why Is Communism Evil?

Communism is not evil because of the vast numbers of communist-supported terror groups like the Palestine Liberation Organization, the Philippines’ New People’s Army, Peru’s Sendero Luminoso, or South Africa’s Umkhonto We Sizwe.

Communism is not evil because of the mass-propagandizing of hundreds of millions of children in the former Soviet bloc, China, Cuba, North Korea, and Vietnam.

All the above are appalling beyond measure, but they are symptoms—not the cause—of the inherent evil of communism.

The positive effects of greater personal responsibility are evident in the United States. Every wonderful invention, every great work of art, every new medical innovation, every highway, every wealth-creating new business, and every amazing sporting achievement was driven by innovative and entrepreneurial individuals.

People who successfully battled alcoholism or drug addiction must have—at some point—taken personal responsibility for their conditions. Personal responsibility is evident in the individual whose thriving company provides others with a livelihood, or an athlete who trains relentlessly to win the championship, or the student who goes above and beyond what is required to achieve a scholarship.

These are the people who lead society to greater achievements and to better lives.

Personal responsibility is the ultimate manifestation of free will.

The Opposite of Personal Responsibility

Shunning personal responsibility leads to poverty, enslavement, and the fundamental opposite of good: evil.

Few, if any, people directly choose evil. By refusing to take responsibility for their lives, they are drawn—through an escalating series of compromises and evasions—into an almost inescapable trap. Ordinarily weak people may eventually become criminals. In an organized socialist society, they may become monsters.

With low levels of personal responsibility, the slide toward evil is inevitable.

What greater attack on personal responsibility could one possibly conceive?

Responsibility implies control. One cannot be held responsible for what one does not control. Driving a vehicle or paying the mortgage or saving for one’s future are all examples of individuals taking control of their lives.

Genuine private charity has the potential to help two parties. Done correctly, a better-off person can interact with someone less fortunate to the benefit of both. Some of the experience and wisdom gained by one can be shared with another. That’s natural human benevolence—it blossoms in a free environment. It’s a good thing.

Communism’s forced redistribution of wealth, however, leads to corruption and decay.

In such a system, the provider of wealth becomes a slave to forces beyond his control. He naturally resents working for faceless others. He has no personal relationship with his beneficiaries and is stripped of his ability to see his wealth put to good use for the benefit of others. He is robbed of experiencing gratitude for his charity. He experiences none of the joys of giving. He loses his incentive to strive to give to others, potentially becoming bitter and resentful.

The “beneficiary” likewise learns no new skills or ideas from the provider. There is no pride or sense of achievement in taking responsibility for one’s own life and family. There can develop a bitterness and arrogant exaggerated sense of entitlement to mask the deep sense of self-loathing that can be experienced by those dependent on others.

The middleman would be the bureaucrat who spends his time robbing and persecuting those he resents—the “rich”—to give to those whose favor he seeks to curry and votes he seeks to buy.

The redistribution of wealth is a cycle of contempt—a cycle that fosters corruption and breeds hatred, jealousy, and resentment. It’s dehumanizing and it weakens the human soul. This is the gateway to mass evil.

At one time in the United States, the corrosive influence of government dependency was so understood among the populace that even Franklin D. Roosevelt felt compelled to address it in his 1935 State of the Union address:

“The lessons of history, confirmed by the evidence immediately before me, show conclusively that continued dependence upon relief induces a spiritual disintegration fundamentally destructive to the national fiber. To dole our relief in this way is to administer a narcotic, a subtle destroyer of the human spirit. It is inimical to the dictates of a sound policy. It is in violation of the traditions of America. Work must be found for able-bodied but destitute workers.

“The Federal Government must and shall quit this business of relief.”

So why is communism evil?

Because communism, socialism, and all the collectivist philosophies despise the individual, the smallest and most important unit of humanity. Correction: The individual is humanity.

Only when people are perceived as slaves to the state—to be exploited or coddled according to bureaucratic whim—does the door open to mass terror and degradation.

Communism is not primarily a political force. Communism is the manifestation of a deep psychological and spiritual weakness in human nature, seething in envy. The desire for communism—i.e., the need to be shielded from one’s own failings—lives in the dark side of every individual. This “dark side” of human nature is as old as humanity, which is why those who thought they saw the end of communism after the fall of the Berlin Wall were sadly mistaken.

Communism never failed. In fact, it was—and continues to be—wildly successful. Communists now rule several major nations—China, Cuba, Vietnam, and North Korea—and are hugely influential in Russia, most of Latin America, all of Africa, and much of Europe, and the insidious beast has made great headway in the U.S. federal government, the popular culture, and on college campuses across the United States.

Communism’s stated goal—the “redistribution of wealth”—was simply designed to seduce the weak to sacrifice their freedom for the ultimate benefit of a few.

The actual goal of communism is global domination, which would in turn create the greatest, most comprehensive tyranny of all time. The newest manifestation of communism would not only feature murderous dictators reminiscent of the old Soviet Union, but would now be coupled with highly efficient surveillance technology, making any form of escape impossible.

If this latest iteration of communism succeeds, it will only be because too many individuals were willing to give up their personal responsibility for an illusory sense of security.

The best anti-communist is the fully self-responsible individual. The only true antidote to communism is personal responsibility.