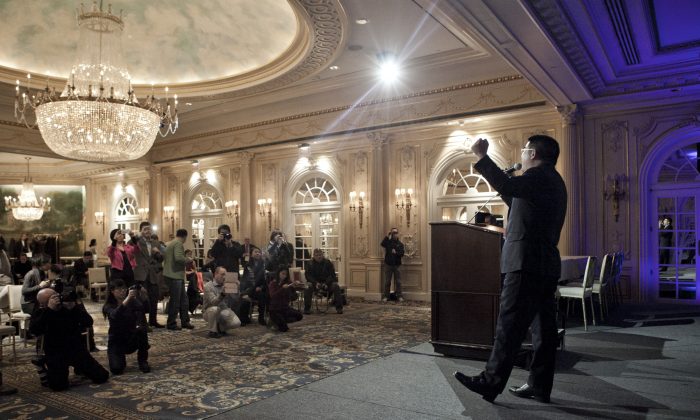 Chen Guangbiao speaks to the press at a news conference he called for the morning of Tuesday, Jan. 7, in a hotel in New York City. The event featured Chen singing karaoke and introducing claims against Falun Gong, a spiritual practice, that mirror official Chinese propaganda. (Samira Bouaou/Epoch Times)
China

Why Is Chen Guangbiao, the Chinese Tycoon Who Wants to Buy the New York Times, Holding a Really Weird Press Conference?

On the morning of Jan. 7, Chen Guangbiao, who arrived in New York because he said he wanted to buy the New York Times, has organized a very unusual press conference indeed: it is about his donations to participants in an alleged self-immolation incident that took place in China 13 years ago. Chen, who dresses in lime-green suits as a publicity gimmick, will have with him two apparent burn victims, whose faces are badly scarred and disfigured.

On Jan. 23, 2001, five (or, later, seven) individuals strode onto Tiananmen Square and, according to the Chinese authorities, proceeded to light themselves on fire. Within hours, Chinese state-run media were ready with the full story: the individuals were practitioners of Falun Gong, and they were trying to burn themselves to death in order to “enter heaven.”

Nevermind that Falun Gong teachings do not contain anything about self-immolation, and forbid killing and suicide. Ignore, also, the enormous range of inconsistencies evident in the official footage and propaganda, as explained by the New Tang Dynasy Television video “False Fire”.

The campaign against Falun Gong, a traditional Chinese spiritual practice, had been going on for two years, and was not getting much public buy-in. The Communist Party had decided to crush the group in July of 1999, but because it was so mainstream the campaign received little support.

Then came the immolation on Tiananmen Square, right on a major holiday. The Washington Post later in 2001, in an article titled “Torture is Breaking Falun Gong,” sums up the impact. There are two sections of the article that deal with this incident:

“The government’s campaign against Falun Gong, launched in July 1999, struggled at first, hampered by uneven enforcement and a split between central government leaders, who viewed the group as a threat to the party’s rule, and local officials, who did not. But over the past six months, China’s security forces have regrouped and devised an approach they say is producing results.

That approach has three ingredients, according to another government adviser.

The first, he said, is violence. The crackdown has always been associated with police and prison brutality, but the adviser said it was only this year that the central leadership decided to sanction the widespread use of violence against Falun Gong members. Citing government reports, he said practitioners who are not beaten generally do not abandon the group.

The adviser said the second element, a high-pressure propaganda campaign against the group, has also been critical. As Chinese society turned against Falun Gong, pressure on practitioners to abandon their beliefs increased, and it became easier for the government to use violence against those who did not. The self-immolation of five purported members in Tiananmen Square on Jan. 23 was a turning point. A 12-year-old girl and her mother died, and the party made the incident the centerpiece of its campaign to discredit Falun Gong. By repeatedly broadcasting images of the girl’s burning body and interviews with the others saying they believed self-immolation would lead them to paradise, the government convinced many Chinese that Falun Gong was an “evil cult.”

The official story was subsequently discredited by a range of groups and voices.

The Falun Dafa Information Center has a general introduction with background, while the video False Fire offers a careful analysis of the China Central TV video of the event, arguing that it was an elaborate hoax. Philip Pan, at the time a Washington Post reporter, traveled to the city that two of the immolators were said to hail from, and found that, in the case of one woman, no one had ever seen her practice Falun Gong.   The National Review dismissed the regime’s claims about the immolations as “more lies from Beijing.”

The question remains as to why Chen Guangbiao is holding this press conference. Was this his actual reason for coming to the United States in the first place?

He is bringing along two of the alleged victims of the incident, said to be a mother and daughter: Hao Huijun and Chen Guo. Both of them are severely disfigured, allegedly from the burns received during their attempt to set themselves on fire. Given the Chinese regime’s careful control of this story, it is impossible to independently verify that those two individuals were actually among those who participated in the event 13 years ago, however.

“If you’re looking from the outside you can see all the problems in the story,” said Helen Nie, 41, in a previous interview with Epoch Times. “But in that environment, you’re trapped, you’re taken in by the plot. It’s very convincing: the people involved are old, young, a kid, a university student, I didn’t think about the suspicious points. I believed it, and I was extremely angry.”

The propaganda narrative went from what she called “childish” reports about Falun Gong practitioners killing themselves for no reason, or suddenly going insane, to this — a much more complex story, with shocking and compelling imagery.

Is that why Chen Guangbiao, with his outlandish claims to buy the New York Times, and stunts in the streets wearing his lime-green suit, has come to New York City?