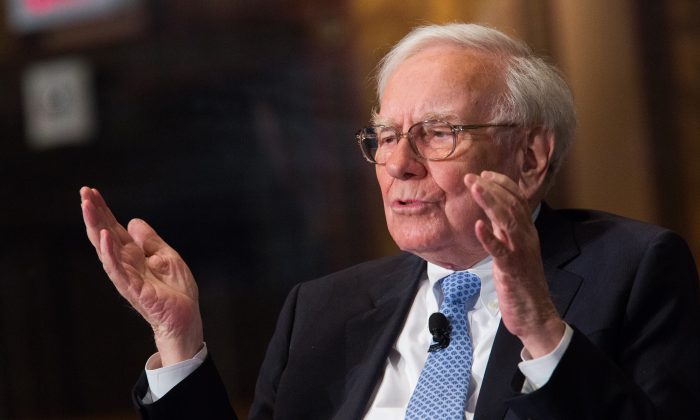 Why Is Buffett Buying US Airline Stocks?

Warren Buffett once called the airline industry a 'death trap.' Now he is investing billions.
By Emel Akan

Investors have shunned airline stocks for many years given the corporate mismanagement of the past. But recently, the U.S. airlines industry has been thriving on low fuel prices and strong demand for travel.

“The U.S. airline industry has been hosting a renaissance party for investors. All of the stocks have tripled or better in the past five years,” Kevin Crissey, a senior analyst at Citi stated in a report.

Low fuel prices, as well as dynamics such as consolidation, capacity management, and other sources of revenue, have turned the industry around, particularly in the United States, according to Jonathan Kletzel, U.S. transportation and logistics leader at PwC Consulting.

“What you see in the last year or two is an era of strong profitability in the airlines. And that is reflected in the stock prices today,” he said.

Berkshire also invested in Southwest Airlines (LUV), according to CNBC.

Buffett’s decision surprised many and got a lot of media attention, as he had avoided airlines for the past two decades. His negative views on the sector stemmed from his investment in US Airways back in 1989.

“I, to my shame, participated in this foolishness when I had Berkshire buy US Air preferred stock in 1989. As the ink was drying on our check, the company went into a tailspin, and before long our preferred dividend was no longer being paid,” he explained in a letter to Berkshire shareholders in 2007.

However, Buffett later got lucky. He was able to sell his shares in 1998 “for a hefty gain,” as he put it in the letter.

He nevertheless railed against airlines for having large fixed costs, strong labor unions, and exposure to commodity pricing. It is not a great recipe for success, he once said.

I’ve got an 800 number I call now whenever I think about buying an airline stock. I call them up any hour—fortunately, I can call them at three in the morning—and I just dial and I say, ‘My name’s Warren and I’m an aero-holic. And I’m thinking about buying this thing.’ Then they talk me down.
— From Buffett's 2001 speech to University of Georgia students

Betting on ‘Lower for Longer’ Oil

“I think there’s a pretty good consensus among economists that fuel is going to stay under $80 a barrel for the foreseeable future. And at under $80 a barrel, the airlines are able to sustain a profitable business in general,” Kletzel said.

Another reason could be the attractive valuations.

“Current airline price-to-earnings multiples are below historical average for many airlines despite improved profitability, a consolidated industry structure, and operating margins that are now in line with the S&P 500 average,” Crissey stated in his report.

The airline industry entered into a prolonged recession in 2001 triggered by an economic downturn, the terror attacks of September 11, a rise in fuel costs, and price wars between carriers. These inevitably led to bankruptcies and consolidation in the industry.

The number of major carriers that dominate the market in the United States shrank from 10 to 4 in recent years as a result of bankruptcies and mergers among U.S. carriers.

According to Kletzel, there won’t be further significant consolidation among the U.S. airlines in the future.

“There are a few small carriers that might get snapped up. But consolidation is not going to be a driver of profitability going forward,” he said.

U.S. carriers, however, may start investing in international carriers that can help drive profitability. This may be something investors are factoring in as they invest in airline stocks, said Kletzel.

Cross-border mergers and acquisitions might be inevitable due to rising competition from international carriers. For the last few years, European carriers have been losing market share to Middle Eastern rivals that invest heavily in new aircraft. As a result, European carriers redeployed some of their assets to the North Atlantic market and started competing with the U.S. airlines, said Kletzel.

Despite the competitive pressure, the U.S. airlines sector still benefits from high demand growth, a solid U.S. economy, and a strong dollar.

There are, however, some factors that can disrupt the positive momentum.

“The geopolitical environment has a high impact on the airlines and any negative event in the geopolitical space can destabilize the industry,” he said.