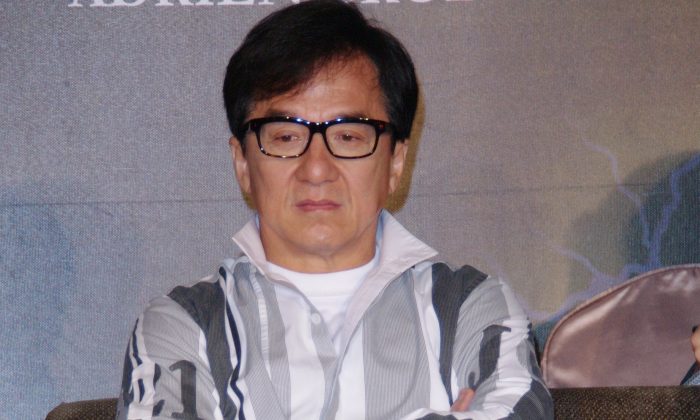 Jackie Chan became a worldwide star for movies in which he combined thrilling kung fu, a gift for comedy, and his engaging smile. In recent years, Chan has used his celebrity to promote the Chinese Communist Party (CCP) and has suffered a string of bad luck.

A native of Hong Kong, Chan saw his popularity plummet there in August 2010 after he responded to eight Hong Kong tourists being held hostage and killed in a tour bus hijacking in Manila, Philippines.

Speaking as Hong Kong’s Tourism Ambassador, Chan said on Twitter, “These kinds of things always happen around the world.” Another one of his tweets said, “Hong Kong is a nation built by a lot of different people … don’t worry! We do not hate!”

Chan’s unusual remarks made many Hong Kong citizens angry. They called him cold blooded and the “Shame of Hong Kong.” Some even suspected that Chan favors the Philippines because of business interests. Chan wrote in his Sina blog on Aug. 16, 2006, that he had started a local business and been received at a high ranking government official’s reception there.

About 20 days prior, Chan’s new movie Karate Kid flopped in Hong Kong, taking in only HK$690,000 (US$89,000) in the first four days of its release. The movie The Emerald and The Pearl, which received only average reviews, was released on the same day and garnered more than twice as much.

Not long before the release of Karate Kid, in mid-July 2010, Chan was also slammed for endorsing China’s largest herbal shampoo maker Bawang, which has been accused of having a possible carcinogen, 1,4-dioxane, mixed in with its products. Chan’s punch line, “No chemicals added,” became something of a joke on the Internet.

One excitable netizen went as far as to list all the brands which had been endorsed by Chan and then encountered various troubles, concluding that “all Chinese products endorsed by Jackie Chan are doomed to fail.”

Involvement on the Mainland

Chan’s image and popularity began heading downhill after he shifted the focus of his business to mainland China in 2005.

In order to develop his business smoothly there, Chan learned how to cooperate with the CCP, while the CCP also found Chan’s popularity useful to promote itself.

This cooperation began as early as October 2000, when Chan became the first ambassador for Beijing’s Olympic bid. Subsequently, he shot a promotional video, attended the Beijing Olympics Logo announcement ceremony, and joined in the hoopla beginning the 1,000 days countdown to the Games.

After Beijing was selected as host of the 2008 Games, Chan was actively involved in several promotions, recorded an officially-endorsed song that counted down one year to the Beijing Olympics and another song that counted down the last 100 days to the Olympics, and was one of the celebrities chosen to sing the last song at the closing ceremony.

Chan has on several opportunities defended Beijing’s political dictatorship. Chan was one of those chosen to carry the Olympic torch in the Olympic torch relay and criticized those who sought to disrupt the relay to call attention to human rights abuses in China. “They are doing it for no reason. They just want to show off on the TV,” Chan said.

On April 18, 2009, during a panel discussion at the annual Boao Forum for Asia, Chan said: “If you’re too free, you’re like the way Hong Kong is now. It’s very chaotic. Taiwan is also chaotic.”

“I’m gradually beginning to feel that we Chinese need to be controlled. If we’re not being controlled, we’ll just do what we want,” he said.

Chan’s praise of the Communist regime became explicit on Feb. 28, 2009 when he released the song “Nation,” which celebrates the sixtieth anniversary of the founding of communist China.

The lyrics say: “Family is the smallest country, the nation is tens of thousands of families.” A Xinhua report says the song “expresses the nation’s love for its people and the people’s fondness for the nation” and “there is a harmonious resonance between the nation’s will and a family’s affection.”

Chan was the project’s mastermind, from planning to resource management. He sang “Nation” with the female singer Liu Yuanyuan, nicknamed “The Red Flag Singer,” famous for singing songs referred to by the communist regime as “the rhymes of the times.”

An April 22, 2009, exclusive interview published by Xinhua gushed about how he led the production team for the song. Xinhua and Sina.com also set up official web pages for “Nation,” which is highly unusual.

In 2010 Chan further embraced the role of propagandist for the regime by investing 200 million yuan (US$30 million) to remake an opera from the Cultural Revolution called, Taking Tiger Mountain by Strategy. This story, originally approved for performance by Chairman Mao’s wife, is a naked work of political propaganda that glorifies the People’s Liberation Army.

Chan is said to believe in Buddhism, and if so, he should believe in the existence of retribution. As he looks back on his recent spell of bad luck, he may consider whether retribution is at work.