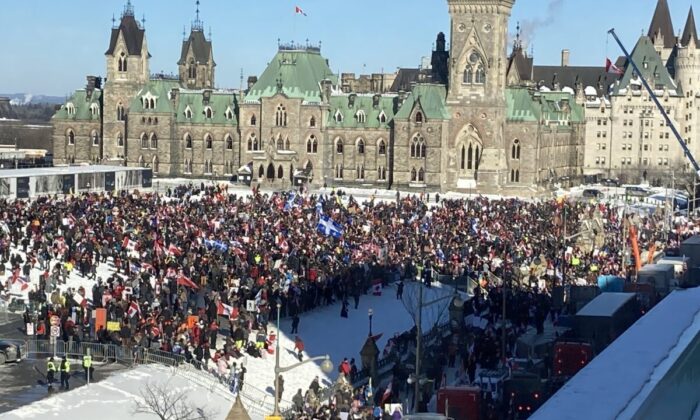 Why I Donated to the Truckers’ Freedom Convoy

The author of this letter wishes to keep their name private due to fear of reprisal or doxxing because they donated to the Freedom Convoy.

Thousands of people and hundreds of trucks from across Canada recently came to Ottawa to ask the government led by Prime Minister Justin Trudeau to end the restrictions now placed on Canadians due to COVID-19, and especially to end the requirements that 100 percent of the population be vaccinated, wear masks, and submit to periodic lockdowns on business activities.

When tens of thousands of people from inside and outside of Canada donated money to a crowdfunding organization, a hacker penetrated the crowdfunding organization’s computer system, obtained a list of the donors and the amounts they contributed, and sent it to several media outlets, including the Canadian Broadcasting Corporation, the publicly owned broadcaster.

The CBC in turn sent email messages to the donors who live in Ottawa asking whether they would agree to be interviewed. As one of the donors, I agreed. To avoid the possibility of being misquoted, however, I sent the CBC the following “top ten” list of reasons why I donated. The CBC did not respond. I hope it will serve to shed light on the controversy.

1. I support the elimination of vaccination mandates that unfairly penalize people who in good conscience think the risks of being vaccinated exceed the benefits. This is a fundamental principle of public health, in my view. No person should be forced to accept a medication or other foreign substance into their body that he or she fears will do them harm; this is a matter of personal freedom and privacy.

2. This principle is supported by many other factors and principles. The World Health Organization issued a position paper on Feb. 1, 2021, that presented WHO’s position on the advisability of requirements of proof of vaccination for travellers, and by implication, vaccine mandates. It noted that “the extent and duration of anti-body-mediated immunity to protect against SARs-Cov-2 reinfection have not been scientifically established. There are also concerns about the suitability of available serological tests to measures individual immunity to SARS-Cov-2.” “There is a risk of establishing different tiers of restrictions on individual liberties, and potentially undermining people’s freedom to socialize and to travel, violating expectations of privacy and adopting enforcement practices that discriminate against vulnerable groups… We stress here that from an ethical and legal perspective, testing negative for protective antibodies should not have the same implications as testing positive for infection; individuals should not be regarded as an infectious disease threat simply because they lack immunity against SARS-CoV-2. … Policy makers should choose the option that least infringes individual liberties.”

3. The risks associated with the currently available vaccines are not inconsequential. In addition to the concerns expressed by many prominent doctors and scientists, there is the fact that the vaccines were rushed into distribution without the completion of trials on animals and humans that would normally precede official approval, that the pharmaceutical companies were given complete protection against liability for adverse effects, and that the pharmaceutical companies have refused to make their clinical trial raw data publicly available before 2025 so that independent experts can assess injection safety and efficacy. Further, information about the adverse effects of past vaccinations is being heavily censored in Europe and North America. That fact alone is bound to raise concerns.

4. The statements of public health professionals and the published statistics by public health authorities call into question the thesis that the fully vaccinated are less a source of virus transmission than the unvaccinated—in fact, quite the reverse. Recently, Dr. Kieran Moore, Ontario’s chief medical officer, conceded that two doses of the vaccine offer minimal protection against infection. Data published by the Ontario Public Health Authority (the only provincial authority to release such information) indicated throughout January 2022 that 75 to 80 percent of the newly infected by COVID (about 98 percent Omicron) were fully vaccinated. The U.S. Centers for Disease Control has confirmed in its recent studies that the fully vaccinated are just as likely as the unvaccinated to transmit the virus. These two facts combined undercut the rationale for vaccine mandates, especially when, as in Canada, the number of unvaccinated is less than 10 percent of the population 18 years of age and over.

5. Vaccine mandates discriminate especially against the people who have already contracted COVID-19 and achieved natural immunity. Several recent studies have demonstrated that natural immunity gained from previous infections is stronger and longer-lasting than vaccine-based immunity.

6. The penalties imposed on the unvaccinated have been excessive to the point of cruelty. People have been fired from their jobs with no opportunity for appeal, no severance, and loss of pension benefits. In addition, the federal government has cruelly deprived them of unemployment insurance benefits. To add insult to injury, the people who in other circumstances have defended the rights of labour have abandoned them for ideological reasons.

7. No government, federal or provincial, performed a cost-benefit analysis of the measures taken to restrict citizens’ freedoms and to lock down the economy. Governments have thus shown neglect in their responsibility to citizens to weigh all the advantages and disadvantages of public policies before they are implemented.

8. According to the Stringency Index developed by Oxford University to measure the harshness of anti-COVID policies imposed by governments (see Our World in Data for an explanation), Canada has consistently ranked among the most stringent and heavy-handed jurisdictions in the world. The limits on Canadians’ freedom have been more severe and lasted longer than those of all but 10 other countries. The Freedom Convoy has become the symbol for average Canadians’ desire to end this seemingly endless abuse and give us our lives back.

9. What choice did the truckers and average Canadians have in the face of the contempt shown by the prime minister and the unwillingness of any major federal political party to listen to, and be responsive to, their concerns?

10. The truckers have demonstrated peacefully and have appealed to the patriotism and understanding of their fellow Canadians—a far better and more respectable approach to political dissent than almost any other group.

These are my main reasons for donating to the Freedom Convoy, and I’m guessing that many others who donated were similarly motivated. It’s unfortunate to say the least that we are all now considered criminals by our government.