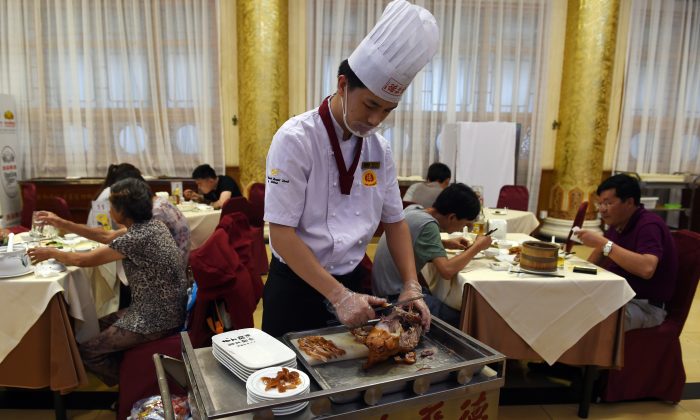 A chef slices Peking duck for diners at the Quanjude restaurant in Beijing on July 24, 2014. Chinese local officials frequently dine in restaurants with the expectation that public funding will cover their expenses. (Greg Baker/AFP/Getty Images)
China

Ms. Shi Yuying ran a hotel in central China for over a decade until it went bankrupt in 2008. Business was bad, but not in the way one might expect.

According to state-run media reports, government officials had made a habit of dining at Shi’s establishment and putting the expenses on public credit rather than paying the bill. The hotel, located in the city of Kaifeng in Henan Province, was eventually forced out of business as the debts piled up and went unpaid.

Despite her receipts and seven years of appealing to the authorities, Shi has not been compensated. Her case went unnoticed until it was covered by local television in Henan.

“I even considered death,” Shi told reporters. “After over ten years of hard work, I didn’t expect that all I would earn in exchange was a pile of IOUs.”

After closing her hotel, Shi began to appeal to government departments in vain attempts to collect over 1.2 million yuan ($200,000) in unpaid restaurant bills. Each receipt bore official stamps from a variety of agencies, such as the police, family planning bureau, and county government offices.

None of Shi’s repeated visits to local authorities bore fruit, she said on television.

Communist Party officials in China are notorious for their abuse of power and misuse of funds. In Shi’s case, the debts were, for all practical intents and purposes, rendered invalid by officials ignoring the bills, changing their posts, or even dying.

After over ten years of hard work, I didn’t expect that all I would earn in exchange was a pile of IOUs.
— Shi Yuying, hotel owner

After Shi’s plight was brought to public attention, the local county government set up an investigation team on March 17 to verify the debts and to create a payment plan. The county has promised to pay back all the money within two years.

Shi is not the only small business owner to experience troubles with stingy officials. According to a report by the state-run Xinhua News Agency, signatures and government stamps are all too often taken by officials as a replacement for actual payment.

Another hotel owner in Henan hung up banners to protest the officials eating at his business for free, and a restaurant owner in Beijing sued his local Communist Party committee for unpaid debts its members owed him.