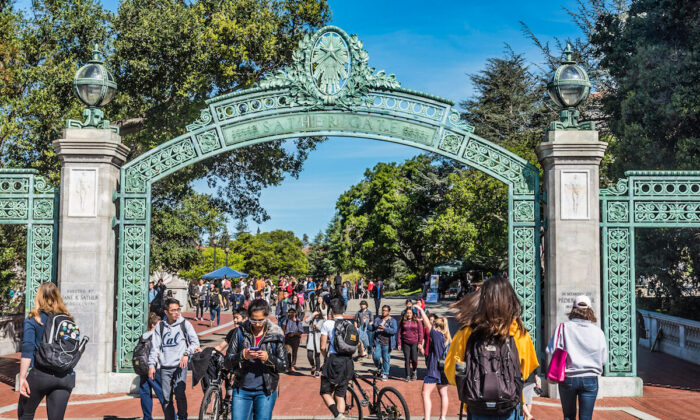 Students pass through Sather Gate of the college campus at the University of California–Berkeley, in a file photo. (David A. Litman/Shutterstock)
Viewpoints

Why Have We Let Colleges Rip Off Our Kids?

One of my sons goes to an elite eastern college that costs all-in $70,000 a year. The value of a school such as this isn’t so much the classroom experience, but the culture of being around other smart people and learning how to be a productive adult.

The college experience, inside and outside the classroom, is what you are paying a king’s ransom for.

But for half of 2020 and a half to all of 2021, many colleges and universities shifted to online learning. In some months, the kids were expected to clear out of campus and go home until the pandemic subsided.

But somebody should have reported these schools to the Better Business Bureau for engaging in fraud. They didn’t deliver what they promised.

The universities pretended that they could deliver pretty much the entire college courseloads online. E-learning would amply substitute for teacher-to-student learning.

Given the overwrought panic that had set in over COVID-19 during most of this period, the school administrators could make a plausible case that for the safety of the students and the faculty, this was the only option. That’s highly debatable because many schools managed to stay open for classes almost the entire time—and with minimal health issues.

But the fraud—bordering on thievery—is that the schools kept charging full (or mostly full) tuition. If the schools want to maintain that they can provide pretty much the same results with online class instruction, then why does any family send their kids to these schools. Instead of spending as much as $75,000 for tuition, anyone can go online and take courses for about one-tenth that price.

So give us our money back.

When I demanded this in an article in the Wall Street Journal last year, I was overwhelmed with supportive notes from parents as irate as I was.

Now, there is good news: Parents are fighting back against the university industrial complex. Politico reports that students are suing schools for “the failure to partially reimburse students for the shift to inferior online learning.”

An even more positive development is that the students will finally get their day in court. The Court of Appeals in the District of Columbia is allowing lawsuits against American University and George Washington University.

By the way, it isn’t as if the schools don’t have enough money to reimburse the students. Many of these elite colleges have endowments of more than $500 million.

Parents and their kids have been shafted by the university industrial complex and should be justly compensated. And the schools should use the rest of their war chest endowments to reduce tuition prices.