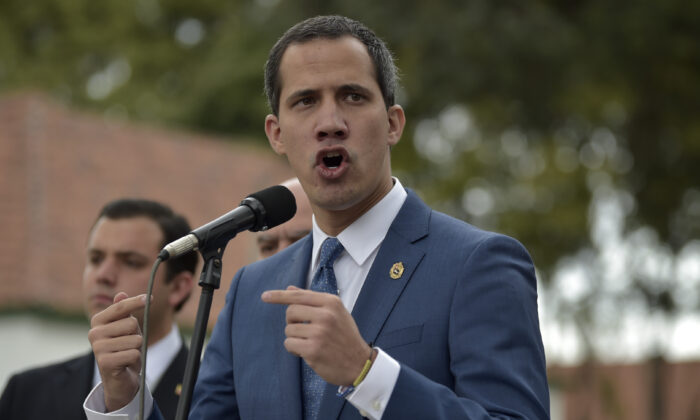 Why Guaido’s Camp Has Been Unable to Unseat Maduro

On Jan. 23, 2019, a wiry politician unknown to the world—and most of Venezuela—stood onstage in eastern Caracas to invoke the constitution and declare himself interim president in front of thousands cheering and waving tricolor flags.

The elections in May the previous year, which had secured Nicolas Maduro his second six-year presidential term, were rigged, Juan Guaidó told the frenzied crowds, a claim since widely acknowledged around the world.

Guaidó’s declaration was almost instantly echoed by the United States and later by more than 50 other nations that recognized him as the legitimate leader. The 35-year-old promised that democracy would soon be restored to the crisis-stricken country; the question on many people’s lips was not if, but when.

But a year on, far from just clinging to power in Miraflores Palace, Maduro seems to be consolidating it. While the socioeconomic and political crisis ensues—which has forced millions of people to flee in recent years—the emboldened leader is attempting to marginalize Guaidó. Earlier in January, Maduro removed him as head of the National Assembly Congress and physically blocked him from entering Parliament.

Guaidó continues to address crowds in Caracas on the imminent return of democracy, but the now-jaded faces number hundreds rather than thousands. His fresh-faced, unabashed optimism, once emblematic of change, after a number of scandals and political blunders, now appears to them a continuation of the opposition’s incompetence and arrogance that have haunted them over the last two decades.

But while Guaidó is the face of the opposition, he isn’t the root of their failings to unseat Maduro, say analysts.

Recent blunders—being photographed with a notorious paramilitary gang at the Colombian border and failing to deal swiftly with accusations of embezzling opposition funds—show the newcomer’s inexperience, but those things aren’t why the opposition has failed to remove Maduro from power.

As a leader, Guaidó has succeeded in uniting a previously fragmented opposition, drawn huge crowds, and continues to be recognized by the majority in the Western Hemisphere.

“They think if they just give it a good push, it’s going to fall over, and we have seen this on display this year. They sold the idea that ‘if there were just oil sanctions, if the international community just recognized Guaidó, Maduro was going to buckle.’ … Those of us who have been watching this for 20 years did not think this was going to happen.”

On Feb. 23, 2019, the opposition’s efforts to push aid from Colombia into Venezuela were supposed to cause a fatal rift between Maduro and his military supporters, but instead, hundreds ended up injured, and trucks of humanitarian supplies went up in flames. In the lead-up to the efforts, the opposition wouldn’t entertain the idea of failure, and as the plan literally went up in flames, it had no obvious backup plan.

This complacent approach is typical of the opposition and stems from a failure to understand the general resilience of authoritarian governments under pressure and the dynamics that have made Maduro particularly hard to unstick.

“Chavismo has this revolutionary, messianic idea that they are absolutely essential to Venezuela’s future, and if you add oil to this, they have pretty good control,” Smilde said.

While Maduro’s popularity is hovering as low as 15 percent, he has co-opted hundreds of military generals into propping him up by offering generous sums of money obtained from corruption, drug-smuggling, and illegal mining.

Guaidó’s campaign has focused on breaking that with key backing from the United States.

Although the United States has stopped short of military intervention, it has made restoring democracy in Venezuela a key foreign-policy objective, ramping up pressure on Maduro and his regime officials with economic sanctions and travel bans, and straining the already-failing economy with a wide-reaching economic embargo.

But at least on the surface, there seems to be a lack of clear U.S. strategy on Venezuela.

But ultimately, the opposition’s failure stems from its own inability to conjure up a political solution to counter the system of political corruption that underpins Maduro’s power.

“Maduro and Chavismo after 20 years have created a structure that says, ‘If you are inside the system, your benefits are unlimited, and if you are outside, you lose everything,’” Pantoulas said. “This is where Guaidó and the opposition failed: They didn’t offer them an alternative that will include these people.”

As Guaidó travels to London and Davos this week, all eyes will be on a potential meeting between him and U.S. President Donald Trump. But without an imaginative solution that counters Maduro’s, Pantoulas is skeptical that more pressure will break the political deadlock.