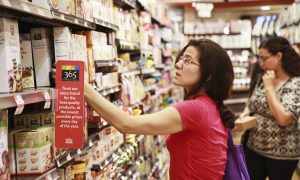 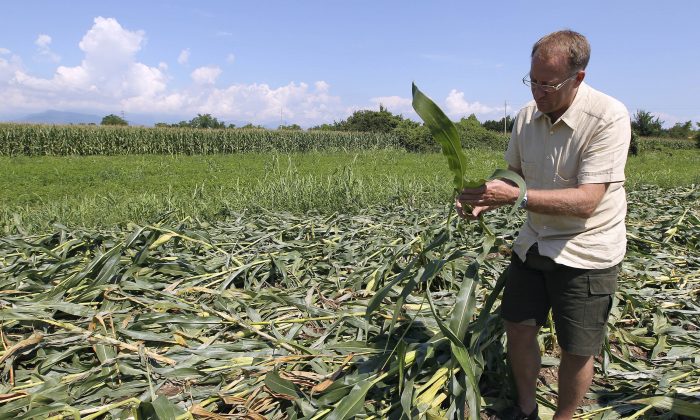 Giorgio Fidenato stands on 350 square meters (just shy of an acre) of nearly mature corn genetically altered to resist pesticides, near Pordenone, northern Italy. Just a day before, on Aug. 9, 2010, the corn had been trampled to the ground by 70 anti-GMO activists wearing chemical warfare suits. Fidenato's genetically modified corn, grown in fields of surreptitiously, and, detractors say, illegally planted Monsanto MON 810 not far from the Austrian and Slovenian borders. (AP Photo/Paolo Giovannini)
GMOs and Biotech

I admit to being confused about GMO. Like many Americans, I’m challenged to understand the consequences of genetically engineered organisms in my body, family, and in the environment. Knowing the facts will help guide us in the choices we make for all the things we care about.

While a long-term study of genetically engineered organisms is still lacking, significant parts of the world are concerned about their impacts: All 27 countries in the European Union now ban or limit GMO crops. Egypt and Algeria also restrict GMOs, as do Peru, Brazil, Bolivia, and Paraguay.

With over 75 percent of all nonorganic foods in the United States containing genetically engineered ingredients, why haven’t the FDA and the USDA, guardian angels of the nation’s food supply, moved in that direction—or at least taken a more cautious approach? And why aren’t GMO foods labeled, so we can make informed choices?

Some things to know about GMO:

• GMO foods are made with new, uncertain technology: Older methods of crossing plants, including hybridization and selection, have been used for centuries. These methods are natural and safe. They don’t try to splice flounder DNA into tomatoes to resist frost (no one has ever tasted the infamous “fish tomato,” a genetically engineered failure of the early 90s). Long-term impacts of GMOs are unknown.

• GMOs are everywhere: Much of our food, though not labeled as such, is already GMO: 85 percent of soy, 40 percent of corn, 75 percent of canola, and 76 percent of cotton grown in the United States are GMOs, reports the USDA.

• Mostly Roundup: 80 percent of food-crop GMOs are bred for tolerance to the herbicide glyphosate, or Roundup, made by Monsanto, according to the Journal of Agrobiotechnology Management and Economics. A Roundup-resistant plant lives while the herbicide kills competing weeds. The problem is that glyphosate stays in the plant. If you eat GM corn or soy, you’re eating the herbicide too. In 2009, a French court found Monsanto guilty of falsifying an advertising claim that glyphosate is biodegradable, reported BBC News. A 2011 European study found glyphosate in 44 percent of volunteers from 18 countries. You’re even exposed if you eat organically: A 2011 study written up on GreenMedInfo.com, “detected glyphosate in 60–100 percent of all U.S. air and rain samples.” Another 2012 study found it widespread in groundwater, reports Reuters.

• Problems with Roundup: Glyphosate has been linked in scientific studies to breast cancer, Parkinson’s disease, autism, MS, infertility, gastrointestinal diseases, and Alzheimer’s. The American Academy for Environmental Medicine says that GMO foods “pose a serious health risk” and has called for a moratorium on the use of GMOs until further studies are done.

• If GMOs are risky, why are they everywhere? Someone left the barn door open—a revolving door between industry and government. Michael Taylor, for example, is both the former VP of Public Policy at Monsanto and the current deputy commissioner for foods under the Obama administration. As a regulator, Taylor approved use of rGBH, bovine growth hormone—a controversial GMO—despite links to cancer, allergies, and higher rates of childhood asthma.

Everyone knows not to put a fox in the chicken house, because while Mr. Fox may know more about chickens than anyone alive, knowledge does not imply honorable intentions.

When I was farming, a peahen, Penelope, escaped from a farm up the road and moved in with our chickens. Eventually she sounded just like a chicken, and blindfolded, you’d never know. GMO proponents would like us to stay blindfolded and believe genetically modified salmon is the same as its wild brethren. They want us to stay blind to potential problems by fast-tracking GMO approval and stacking the regulatory deck. They would like us to turn a blind eye to the growing number of negative GMO studies and continue to trust that Monsanto, guilty of lying and polluting, can protect our health while telling us a peahen is a chicken.

It’s time for Congress to pull off the blinders for good and pass a responsible GMO labeling bill that protects the health of everyone. Safety comes first.