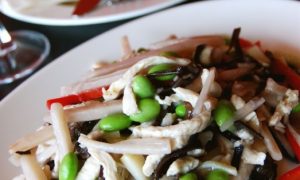 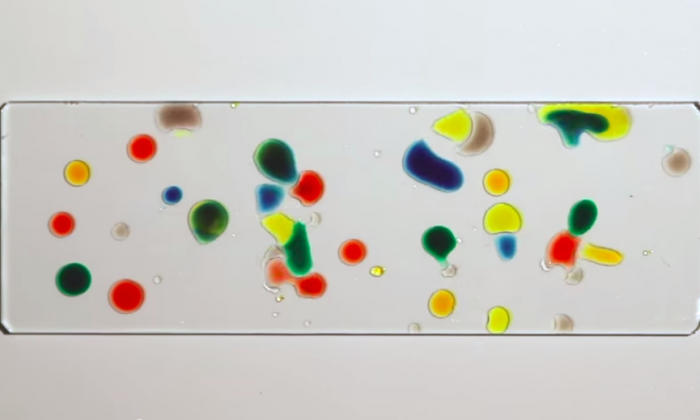 Why Food Coloring Droplets ‘Dance’ Around

Under certain circumstances, droplets of fluid will move like performers in a dance choreographed by molecular physics.

“These droplets sense one another, they move and interact, almost like living cells,” said Manu Prakash, an assistant professor of bioengineering at Stanford University.

The unexpected findings may prove useful in semiconductor manufacturing and self-cleaning solar panels, but what truly excites Prakash is that the discovery resulted from years of persistent effort to satisfy a scientific curiosity.

The research began in 2009 when Nate Cira, then an undergraduate at the University of Wisconsin, was doing an unrelated experiment. In the course of that experiment Cira deposited several droplets of food coloring onto a sterilized glass slide and was astonished when they began to move.

Cira replicated and studied this phenomenon alone for two years until he became a graduate student at Stanford, where he shared this curious observation with Prakash. The professor soon became hooked by the puzzle, and recruited a third member to the team: Adrien Benusiglio, a postdoctoral scholar in the Prakash Lab.

Together they spent three years performing increasingly refined experiments to learn how these tiny droplets of food coloring sense one another and move. In living cells these processes of sensing and motility are known as chemotaxis.

As they explain in Nature, the critical fact was that food coloring is a two-component fluid. In such fluids, two different chemical compounds coexist while retaining separate molecular identities.

The droplets in this experiment consisted of two molecular compounds found naturally in food coloring: water and propylene glycol.

The researchers discovered how the dynamic interactions of these two molecular components enabled inanimate droplets to mimic some of the behaviors of living cells.

Essentially, the droplets danced because of a delicate balance between surface tension and evaporation.

Evaporation is easily understood. On the surface of any liquid, some molecules convert to a gaseous state and float away.

Surface tension is what causes liquids to bead up. It arises from how tightly the molecules in a liquid bind together.

Water evaporates more quickly than propylene glycol. Water also has a higher surface tension. These differences create a tornado-like flow inside the droplets, which not only allows them to move but also allows a single droplet to sense its neighbors.

To understand the molecular forces involved, imagine shrinking down to size and diving inside a droplet.

There, water and propylene glycol molecules try to remain evenly distributed but differences in evaporation and surface tension create turmoil within the droplet.

On the curved dome of each droplet, water molecules become gaseous and float away faster than their evaporation-averse propylene glycol neighbors.

This evaporation happens more readily on the thin lower edges of the domed droplet, leaving excess of propylene glycol there. Meanwhile, the peak of the dome has a higher concentration of water.

Evaporation determines the direction of that motion. Each droplet sends aloft gaseous molecules of water like a radially emanating signal announcing the exact location of any given droplet. The droplets converge where the signal is strongest.

So evaporation provided the sensing mechanism and surface tension the pull to move droplets together in what seemed to the eye to be a careful dance.

Based on these experiments the paper describes a “universal rule” to identify any two-component fluids that will demonstrate sensing and motility.

Adding colors to the mixtures made it easier to tell how the droplets of different concentrations behaved and created some visually striking results.

New Method Can Image Single Molecules and Identify Its Atoms

In another experiment, researchers showed how physically separated droplets could align themselves using ever-so-slight signals of evaporation.

In a third experiment they used Sharpie pens to draw black lines on glass slides. The lines changed the surface of the slide and created a series of catch basins. The researchers filled each basin with fluids of different concentrations to create a self-sorting mechanism.

Droplets bounced from reservoir to reservoir until they sensed the fluid that matched their concentration and merged with that pool.

What started as a curiosity-driven project may also have many practical implications.

The deep physical understanding of two component fluids allows the researchers to predict which fluids and surfaces will show these unusual effects. The effect is present on a large number of common surfaces and can be replicated with a number of chemical compounds.

“If necessity is the mother of invention, then curiosity is the father,” Prakash observed.

Tom Abate is the associate director of communications at Stanford Engineering for Stanford University . This article was previously published on Futurity.org. Republished under Creative Commons License 4.0.