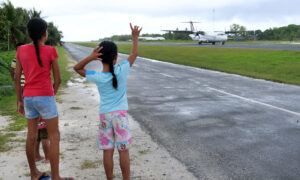 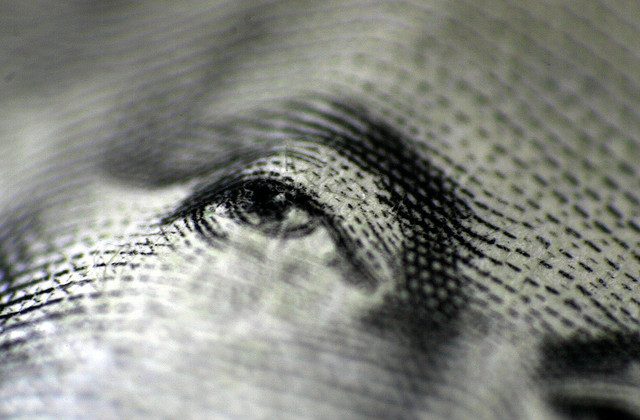 In the eye of the beholders, dollar dominance rules. (Flickr/peasap, CC BY)
Business & Economy

Why Dollar Dominance Is Secure Despite Growth of Global Rivals

In imploring the world to be less dependent on the U.S. dollar for international transactions, French finance minister Michel Sapin is expressing a wish that many of the euro’s creators hoped would already be reality.

Backed by the bosses of some major French companies, Sapin argues in a Financial Times interview that Europe should break free from the longstanding use of the dollar for international commodity and goods transactions, and as the intermediary currency for foreign exchange trade. At present, the FT reports, half of all cross-border borrowing and lending and 87 percent of forex trade is conducted in US$, which also make up 60 percent of the reserves held by the world’s central banks.

On the face of it, it’s not an outlandish idea. Europe can claim to be a bigger unified economic space than the U.S., and in some ways it is more structurally balanced. The Eurozone’s current account has recently moved slightly into surplus, in contrast to the chronic U.S. deficit. As a result, Europe avoids an American-style reliance on capital inflows to pay its way. Critics say it’s only the dollar’s reserve currency status that allows America to get away with this—uniquely borrowing abroad in its own currency, at near-zero interest rates. This, some allege, also enabled the massive international “imbalances” which led to the 2007/8 crash, and have not been corrected by it. A “rebalancing” of the world economy, by switching global payments away from the dollar, is part of Sapin’s plea.

Unfortunately for the Eurozone, and other aspiring economic blocs in Asia and Latin America, the dollar’s status as reserve currency is more than an outmoded historical artifact. The U.S. economy may no longer be the world’s biggest, if Europe is treated as a single commercial space. But the way that space has been constructed makes the euro a very pale substitute for the greenback. Euro-denominated debt is still backed by its national issuers, not the whole Eurozone, meaning that the European Central Bank (ECB) lacks the guarantee and lender-of-last-resort powers of the Federal Reserve—even if the ECB governor might pledge to do “whatever it takes” to preserve the Euro by supporting debts issued in it.

That pledge has helped to stabilize the Eurozone by reining-in the interest rate premium being paid by its weaker peripheral members. But the austerity imposed on those members, and the deflationary bias this creates across the whole area, means that—for the foreseeable future—Eurozone growth is destined to be significantly slower than the U.S. and other countries with a truly unified currency. The UK (with or without Scotland) could, improbably, overtake Germany in economic size if the widely-forecast growth differential is not corrected. France, although not a problem debtor, is stuck on a particularly lackluster growth path, despite Sapin’s best efforts.

This means the US$ will remain the obvious currency in which to hold assets and reserves, which in turn makes it the easiest currency for trading primary commodities and other goods and services. U.S. dollar bonds give the holder a call on what is still the world’s largest and most reliable tax base, even when (or if) China overtakes it in absolute GDP. The need to narrow its fiscal and external deficits is making the U.S. more fiscally assertive abroad—extending its tax net, and escalating the punishment of those who hide their assets or use corrupt practices to win foreign contracts. Fines imposed by the U.S. on a French bank (for helping sanctions evasion) were one of the triggers for Sapin’s outburst. Yet it’s the Eurozone’s financial transaction tax proposal that is raising most hackles about extra-territoriality.

The U.S. will continue to wield such power, knowing that it has preserved the virtuous circle (strong dollar demand enabling faster growth that reinforces dollar preference) and that it must underline its tax-raising strength in order to keep doing so.

Recent stand-offs between the president and Congress show that the U.S. federal budget isn’t problem-free. But at least it exists—and is large enough to administer a meaningful fiscal stimulus when recession threatens. That’s something the Eurozone still has to leave to member states, of which the only one empowered to run a countercyclical deficit insists on surpluses that only prolong the surrounding downturn.

Even if the U.S. economy loses its global pre-eminence, too much of the world’s wealth is tied up in dollars for any country to favor more than a marginal shift away from it. If China, Japan, the Gulf states or other major holders of dollar debt wish to switch to other currencies on a large scale, they will need to do it gradually. A rush for the exits would not only devalue their investments, but also undermine external trade that will remain reliant on the U.S. market, given Europe’s self-containment and slow growth.

The euro may, despite its zone’s subdued economy, incrementally raise its share of global transactions. The world’s investors have an appetite for Europe’s single currency which it has been slow to sate, because of its aversion to centralized borrowing. China’s biggest sovereign wealth fund, among others, has made clear its willingness to buy more euro debt, if the ECB can provide it. But the Eurozone’s ability to do so remains fundamentally constrained by its design. And China’s desire to invest abroad also confirms that, despite the impressive absolute size of its economy, its own renminbi (RMB) is a long way from significant international status. For this it would need (among other American characteristics) a more open capital account and flexible exchange rate, a much more transparent domestic financial system, and stronger assurance that it is not about to repeat Japan’s bubble-bursting lapse into stagnation. By letting its monetary resources finance U.S. stimulus, China has ensured the dollar will stay dominant for at least another decade.

Alan Shipman is a lecturer in economics at The Open University in the U.K. This article was previously published on The Conversation.