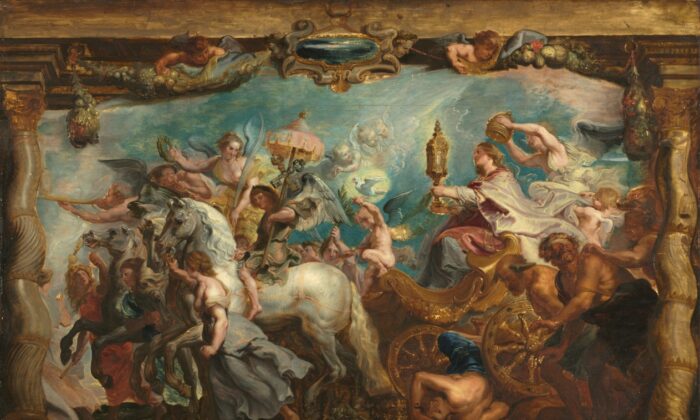 "The Triumph of the Church," after 1628, by a follower of follower of Peter Paul Rubens. Cleveland Museum of Art, Cleveland. (Public Domain)
EpochTV Reviews

Why Does the Left Attack the Church and How Should Christians Respond?

Christians have been able to enjoy the separation of church and state in America for quite some time. Many Christians have taken this as a free pass to live out their beliefs and morals quietly in their personal lives, completely detached from the world of politics altogether. It is becoming increasingly more difficult in today’s culture to live out Christian values without interference from the government or cultural opposition. For Christians who are seeing the attacks on religion amplifying in our culture and wondering how they should navigate the conflicting world of faith and politics, check out EpochTV’s latest program “The Left’s Not so Subtle Attack Against the Church” presented by Lucas Miles, host of the series “Church & State.”

Miles is an ordained minister and best-selling author. In this episode, he talks about how the church in America used to be a sacred place of refuge and safety, yet the political left has increasingly declared it open season on Christians, particularly pro-life institutions since the overturning of Roe v. Wade. Miles says the church has been invaded by the same ideology attacking our nation for some time—Marxism. He says it’s important for Christians to not have their heads in the sand and be unaware of the spiritual battle raging around them. America used to be the place where people could go to church without being worried about persecution, but the attacks against churches are increasing, and with it, so should Christian faith and vigilance.

Why Does the Left Want to Destroy Christianity?

Miles believes that Roe v. Wade being overturned was exactly what the left needed to justify attacks against the church. “If you understand Marxism, what you understand is that the church stands as an obstacle to the Marxist agenda,” says Miles. Unless the church is removed or converted to a Marxist way of thinking, Marxism cannot thrive in society. Miles says that the church and family are what has been needed to prevent a Marxist takeover of society in America so far. This is because the root tactic of Marxism is to destabilize society to the point where its own people essentially overthrow it, allowing Marxists to rebuild it according to their power agenda.

Destabilizing a society requires tearing down faith in every institution, along with the values and morals of society as a whole. Once this is accomplished, people and the very structure of society are a blank slate to be used to serve the interests of the Marxist state. Religion not only provides a firm foundation of values that stabilize culture, but it also offers a higher power that governs people, which is in direct opposition to Marxism. The ruling party in a Marxist or communist state must establish itself as the ultimate authority. Anything that threatens to supersede the authority of the ruling party is a threat that cannot be tolerated. Miles believes that when Roe v. Wade was overturned, it gave the far left the fuel it needed to motivate the “useful idiots” of society to wage war against the church and the institutions that threaten the rise of Marxism in America.

Should Christians Stand Against Religious Persecution?

Miles said that as the church gets brighter, Christians, and especially church leaders, need to start expecting darkness to get darker, warning that more blatant protesting and acts against the church are going to increase. He shows clips of the hateful and sick attacks against Christians, from women stripping in church services screaming “my body my choice” to people taking a man’s bible and vandalizing it; kicking the bible around, ripping it, and eventually throwing it in a porta-potty. It is disturbing to watch the blatant hate crimes being committed against others, and although Americans aren’t being burned at the stake or tortured yet for their faith, Miles says this is where it all starts.

Hollywood treats Christians as a group that is allowed to be marginalized and made fun of. How did it come to this point? Miles says America used to be comprised of people who cared about God and country. Now, our society seems to only care for statism. “Now it seems like the new God is just the leftist state and if you worship anything else it’s not accepted and you’re going to have to pay a price for it.”

The EpochTV episode shows tweets saying burning churches is an acceptable way to protest Roe v. Wade, pointing out that Miles has had many tweets and videos removed for simply sharing Bible verses about political topics. Yet outright hatred and calls for violence against Christians are allowed to be circulated on social media.

Fascism uses force and intimidation to suppress ideas and people groups. The left accuses the right of being fascist, yet it is the left who is operating in this way. Miles says America used to be comprised of Republicans and Democrats, but now he believes the Democrat party is a home for radicals and Marxists. “This is Biden’s America.” But it is not just displayed through statements on social media, it is translating into real actions of violence and harassment.

Miles encourages viewers not to allow the left to win by becoming fearful or backing off of their religious beliefs. He encourages Christians to do the opposite, doubling down on their faith, not out of spite, but because it will take a strong faith to get through these difficult times. “I don’t see any way to navigate this, in my opinion, without the peace that I have because of my faith in Jesus.” He also says that people of all religions should be equally appalled by what the Marxist agenda is doing. “If Christianity is not safe in the United States of America, then no religious belief is safe in the United States of America.”

The episode calls on Christians to learn how to stand up for what is important, defend their faith, and also protect their churches and people during worship services. Now is the time to stand strong for religious freedom, because without it, we do not have freedom at all in this nation. Because of this, Miles believes Christianity and religious freedom should be central issues in today’s political discussions.

As a Christian myself, I appreciated this episode and thought the host made very good points. He certainly understands the root threat of Marxism and how it is operating in our society. I believe Christians would benefit from a more in-depth conversation about why religious freedom is important to defend, particularly if you are a Christian. For example, the Bible calls Christians to stand up for those who cannot speak for themselves, to be bold, to speak the truth, and not to be overcome by evil but rather to overcome evil with good. The Bible also calls Christians to be aware and engaged in the spiritual battle going on around us and to be salt and light on the earth, advancing God’s kingdom. There is also the Biblical aspect of being a good steward of everything God has given us, and for Americans, God has given us freedom. Will we be lazy with our freedom, or use it to stand against evil?

This episode is the first of a multiple-part EpochTV series regarding the left’s attack on the church. I would highly recommend any Christian who is just wading into the water of political activism to watch the series and become more aware of the spiritual battle being waged in our culture against Christianity, and use this knowledge to discern how to engage in it and stand for God’s truth.