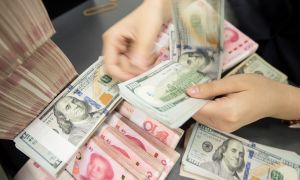 Is Beijing Opening Its Financial Markets to Save Its Economy?
0
Share Now
FacebookTweetParlerEmail
Copy Link 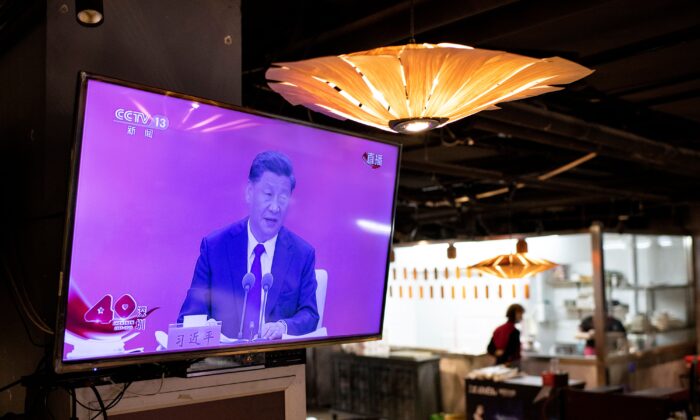 A television screen at a restaurant in Beijing shows Chinese leader Xi Jinping speaking during a broadcast from Shenzhen at an event marking the 40th anniversary of the establishment of the Shenzhen Special Economic Zone on Oct.14, 2020. (Noel Celis/AFP via Getty Images)
Thinking About China

Why Does the Chinese Regime Continue to Pursue a Planned Economy?

Among the four major problems of China’s economy—if upgrading of the manufacturing sector; turning the real economy into the fictitious economy; and Beijing’s desire to push its “internal circulation” concept are considered difficult, then the ideological problem is a dead end.

According to an article by the socialist economist Wu Jinglian, titled “My Views on Current Reforms in China” published in February 2016, there are four obstacles to China’s economic reform. The top one is “ideological obstacles,” followed by “resistance from vested interests.”

Wu spoke more euphemistically, adding an attributive “Soviet-style” before “ideological.” In fact, whether it is “Soviet-style” or “Chinese-style,” it essentially belongs to the Marxist-Leninist communist ideology—an ideology that ought to be rejected.

The leadership under Chinese leader Xi Jinping still carries this shackle and worships the Marxist-Leninist ideology. This is manifested in the guiding ideology of Beijing’s economic policies, which insist on the combination of “effective market and efficient government.” For example, in the communique of the 14th Five-Year Plan issued this year: “It was proposed that the basic socialist economic system be upheld and improved, to give full play to the decisive role of the market in resource allocation, give better play to the government function, and promote better integration of a more effective market and more efficient government.”

However, the Chinese Communist Party (CCP) prefers “efficient government” rather than “limited government.” This is not a game of words, but the Party’s true nature: it believes it should be in charge of everything from east to west, north and south. So, how can it accept a “limited government”? What the CCP wants is to be unrestrained and allowed to do whatever it wants.

The main reason for the CCP’s defense of the term “effective market and efficient government” is the so-called “economic miracle” since the “opening up” reforms of the 1980s.

However, looking back on China’s economic performance in the past 40 years, many economists believe that it is not enough to call it a “miracle.” For example, in August 2019, the U.S.-based think tank American Enterprise Institute issued a report by Derek Scissors, explaining China’s economic difficulties today are precisely due to the accumulation of internal contradictions after decades of sustained rapid, abnormal economic growth in China. Two famous Chinese economists, MIT Sloan School of Management professor Huang Yasheng and former Yale University professor of finance Chen Zhiwu, also hold similar views.

Why has China’s economy grown in the past 40 years? The book “How the Specter of Communism Is Ruling Our World,” by the editorial board of the “Nine Commentaries on the Communist Party,” has an incisive and brief summary: “First, the relaxation of the state-owned economy and the abandonment of central planning, as well as the revitalization of the private sector have given the Chinese economy a powerful productive drive. A second factor was the massive influx of Western capital and technology into China during the reform era … Western countries even gave the Chinese regime preferential trade status along with broad market access … The CCP developed its economic power using unethical models of development. Among these include sweatshop labor, the extreme exploitation of workers and peasants, the violent demolition of housing and relocation of the occupants, and the like. For the sake of short-term growth, the CCP ignored environmental destruction and other hazards to squeeze every last drop of profit from its land, people, and resources.”

The book also explains how the Chinese regime caused a breach in the normal capitalist economic order: “The CCP’s economic model utilizes state authority to induce rapid economic development while employing underhanded tricks to be competitive. It has encouraged other countries to adopt heavier state intervention. These countries have made the grave mistake of idolizing the Party’s model as a success while ignoring its human and moral tragedies.”

Indeed, if the CCP’s economic model can “succeed,” it will be a disaster for the world.

Despite the price it has paid, China’s economy is struggling. This is enough to prove the bankruptcy of the CCP’s economic model, and the ideology behind it is proven to be rubbish.

However, the Xi leadership seems to be obsessed and still want to “open up a new realm of Marxist political economy.” In terms of policy, it continues to “unswervingly consolidate and develop the public economy, persists in the dominant position of public ownership, gives full play to the leading role of the state-owned sector, and improves its vitality, control and influence.”

In the eight years since Xi came to power, he has made many superficial actions that appear to reform state-owned enterprises. For example, Beijing has proposed the “1+N” policy framework, “Four Reforms” (beginning in July 2014), “Ten Pilot Projects” (started in July 2016), and “Double Hundred Actions” (started in March 2018). On June 30 this year, the CCP said it launched the “Three-year Action Plan for State-owned Enterprise Reform (2020-2022),” but the text has not been released.

However, these are all for show. Sometimes, the CCP seemed to regress. For example, the CCP has repeatedly emphasized that in state-owned enterprises, the Party committee must control the direction, manage the overall situation, and ensure implementation.

In fact, economists at home and abroad have long agreed on the direction and path of state-owned enterprise reform. For example, when the World Bank formulated a “long-term reform roadmap” jointly with the Development Research Center of the State Council in 2012 at the invitation of the Chinese regime, one of them was regarded as a landmark proposal—that is, state-owned enterprises should be supervised by independent asset managers.

The CCP simply did not adopt this consensus. This iconic World Bank proposal was later reportedly canceled due to opposition from China’s state-owned firms and the government agency that oversees them, the State-owned Assets Supervision and Administration Commission.

Why did the Xi leadership not adopt the proposal? The specter of communism is at work here.