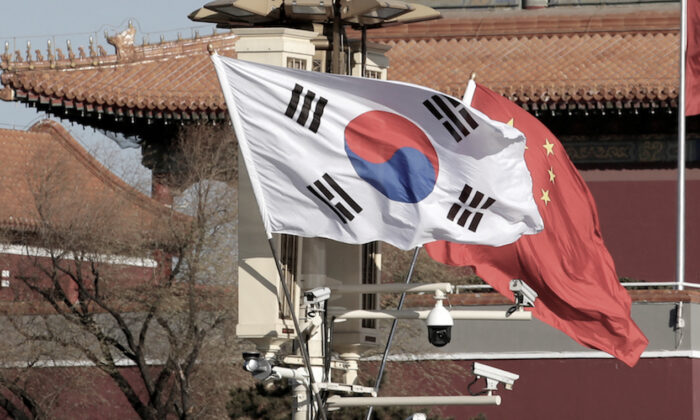 South Korea and China's flags flutter next to Tiananmen Gate in Beijing, China, on Dec. 15, 2017. (Jason Lee/Reuters)
Thinking About China

Why Does the Chinese Regime Constantly Attack Korean Culture?

The opening ceremony of the Beijing Winter Olympics in February angered viewers around the world. It especially angered South Korean viewers.

During the performance, a Chinese woman emerged wearing a hanbok, a dress that is an inextricable part of Korean culture. When asked for comment, the Chinese Embassy in Seoul insisted that the performer merely represented China’s many ethnic groups.

Critics, however, were slow to accept the embassy’s explanation. Instead, they argued, the performer (and performance) was nothing more than a representation of “cultural appropriation.”

The critics were correct. The “hanbok affair” was not without precedence; on numerous occasions, China has appropriated parts of Korean identity and culture, all in the hope of antagonizing a country that it considers a threat to its Asian agenda.

Now, before going any further, it’s important to offer some context here. Not all forms of cultural appropriation are considered equal. Some argue, rather convincingly, that everything is culture, and everything, to some extent, is appropriated. All forms of art, from music to video games, are the products of appropriation.

However, when it comes to attacks on Korean identity, Beijing’s acts of appropriation are more akin to daylight robbery. The thievery is not occurring at an unconscious level; it is deliberate and designed to provoke the Korean people.

Beijing’s attempt to undermine Korean identity is what’s known as salami slicing, a divide-and-conquer tactic used to undermine the opposition. It involves stripping away a country’s autonomy, one piece at a time.

I reached out to Gilbert F. Rozman, an American sociologist specializing in Asian studies, for comment on the matter. I asked Rozman, a man who has spent a great deal of his professional career focusing on China-Korea relations, why China is so interested in appropriating Korean culture and why the Chinese Communist Party (CCP) is so fixated on stripping away parts of Korea’s collective identity.

“Korea,” he said, “is the prime test of China’s historical identity of Sinocentrism, Central Kingdom, and the tribute system.”

For the uninitiated, the Chinese tributary system involved foreign countries, including Korea, sending emissaries and exotic products to the Chinese emperor. The emperor would then assess the gifts and decide whether or not to allow the country in question to conduct business in China. The system involved all foreign parties acknowledging, either implicitly or explicitly, that China was the predominant force in East Asia.

Today, according to Rozman, South Korea “is seen as abandoning its heritage for the West.” For Chinese leader Xi Jinping and his colleagues, Korea’s deference to Western countries—especially the United States—borders on treason.

China’s attacks on Korean identity are nothing new. “In 2004,” as Rozman noted, “the history of the Koguryo dynasty was the focus” of those in Beijing. From the first century BCE to the seventh century CE, the Koguryo (Goguryeo) ruled northern Korea (the word Korea comes from Goguryeo.). In 2004, the CCP claimed that the kingdom was an integral part of China’s heritage, not Korea’s.

In 2017, incensed by Seoul’s agreement with Washington to build a missile-defense system, the CCP decided to ban a number of Korean products, including fried chicken and K-dramas.

In 2020, the CCP attempted to convince the world that kimchi, perhaps the food closest to Koreans’ hearts, was actually a Chinese pickled vegetable dish.

Last year, BTS, one of the biggest pop bands in the world, found themselves targeted by Beijing.

Around the very same time as the CCP was targeting K-pop artists, Baidu, China’s answer to Google, caused genuine outrage among the citizens of South Korea when it introduced a famous Korean poet as “Chinese.”

This was a classic case of what psychologists call “gaslighting,” in which a perpetrator attempts to convince others that black is indeed white, that up is, in fact, down, and that historically-significant Korean figures are actually Chinese.

As the aforementioned Rozman has observed, the attack on South Korean identity stems from a belief that Seoul is acting, and continuing to act, in an “insubordinate” manner. With the CCP busy trying to create a cohesive Sinocentric narrative in East Asia and beyond, insubordination cannot and will not be tolerated.

However, just because the CCP won’t tolerate it, one shouldn’t expect the “insubordination” to stop. On May 10, Yoon Suk-yeol, a man who won the tightly contested presidential election by marketing himself as the tough-on-China candidate, will become the new president of South Korea. The conservative candidate won’t kowtow to China.

In an effort to preserve Korean ideals and values, Yoon has promised to put more distance between Seoul and Beijing. He has promised to work closely with political establishments in both the United States and Japan. Naturally, such declarations have angered the CCP.

If Yoon keeps his word, expect tensions to grow between China and South Korea. And as tensions grow, expect acts of appropriation and gaslighting to remain a constant theme.