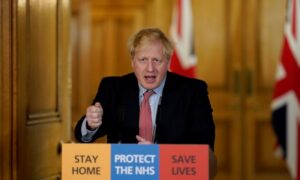 Perspective on the Pandemic: British PM’s Ties With the Chinese Regime
0 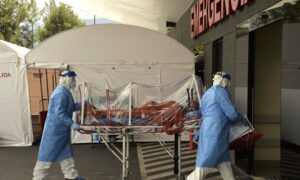 Perspectives on the Pandemic: Why Ecuador Has a Serious Outbreak
0 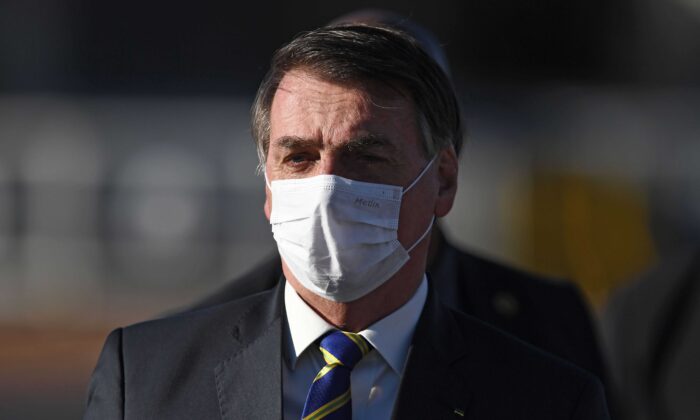 Brazilian President Jair Bolsonaro arrives at the flag-raising ceremony before a ministerial meeting at the Alvorada Palace in Brasilia, on May 12, 2020. (Evaristo Sa/AFP via Getty Images)
Viewpoints

Why Does Brazil’s Bolsonaro Refuse to Lock Down His Country’s Economy?

When reports regarding COVID-19 illnesses began to surface, media outlets initially downplayed the risks. But they soon followed the World Health Organization’s (WHO) claims that the virus was more serious than the seasonal flu and that a high volume of cases could prove burdensome to healthcare systems, and governments around the globe scrambled to keep the virus from spreading rapidly.

In America, we watched as some state governors quickly adopted policies that produced arrests, protests, and mass unemployment. In Brazil, under the leadership of Jair Messias Bolsonaro, a former congressman dubbed the “Trump of the Tropics,” state governors followed in American governors’ footsteps, shutting down businesses and violently arresting anyone who dared to serve their customers.

In TV appearances and media briefings, the president, who was often condemned for not wearing his face mask properly, repeated that the virus wasn’t that bad.

“Many will catch it [coronavirus] whether or not they are careful. That will happen sooner or later,” he told the media. “We must respect it, take personal hygiene seriously, but we can’t be neurotic about it, as if it [this crisis] were the end of the world.”

“There are many governors, in my view, who are taking measures that will harm our economy a lot. Life goes on, we cannot be hysterical.”

In an attempt to persuade governors to change course, Bolsonaro’s office launched a campaign entitled Brazil Can’t Stop, but his efforts didn’t go far, as the Brazilian supreme court (the Supreme Federal Court) ordered the campaign to end.

In Brazil, critics followed suit, with attorneys Thiago Santos Aguar de Padua and Jose Rossini Campos do Couto Correa filing an impeachment request with Congress arguing that the president “[practiced] a crime of responsibility by going against recommendations coming from health authorities and by taking part in crowded demonstrations during the COVID-19 pandemic.”

The attorneys were referring to the several instances in which Bolsonaro was seen coming into close contact with supporters who crowded the entrance of the capital’s presidential palace to ask the leader to let them go back to work.

Some of these encounters were emotional: workers shed tears while telling the president that they couldn’t survive on the BR$600 monthly cash assistance that the government provides, that they didn’t want “government charity” and wanted to “go back to work.”

But it didn’t matter what working-class Brazilians wanted. The president found himself unable to unilaterally reopen the economy.

What he was able to do, however, was prevent government surveillance to track most residents breaking stay-at-home orders.

When discussing different approaches to the pandemic in early March, members of the U.S. Congress would often mention South Korea as an example to be followed.

While some, such as Libertarian Party presidential hopeful Rep. Justin Amash, claimed that the small nation had done it right by not shutting down the economy in the aftermath of the spread of the virus, they would often omit the fact that the Korean nation used mass surveillance tools to identify residents who may have been exposed to the virus. The country also used the same types of programs to push for mandatory testing.

In the state of São Paulo, Governor João Doria implemented a surveillance program to ensure that residents were staying home, tracking their movements via cell phone GPS data. When asked to implement the system on the federal level, however, Bolsonaro said no.

In early April, the Brazilian minister of science, technology, innovation, and communication Marcos Pontes said that Bolsonaro had asked him to delay the use of cell phone surveillance to track crowds.

Urging Pontes to wait until the executive had had enough time to evaluate the program, the minister put a hold on implementing the tracking system nationwide.

In spite of what could easily be seen as a stand for privacy rights, members of Brazil’s “classical liberal” groups, many of whom are now in Congress, continued to denounce the president for his “irresponsible” approach to the coronavirus crisis.

WHO Changes Policy, Says Mass Lockdowns Were Never the Goal

Bolsonaro found himself in the middle of yet another political debate in mid-April.

After firing Health Minister Luiz Henrique Mandetta, a staunch defender of the lockdown, Bolsonaro locked horns with former justice minister Sergio Moro, who in March had authorized the military police to arrest anyone who went against state stay-at-home orders.

Moro became a household name following the Car Wash operation, which led to the arrest of several politicians involved in a long-term corruption scheme tied to the country’s oil company, Petrobras. He was the judge who authorized the investigation of the corrupt politicians, gaining the trust of the country’s conservative populace.

After Bolsonaro allegedly approached him to discuss a change to the leadership of the Federal Police, eventually firing the head of the FP, Moro resigned.

Although the lockdowns weren’t brought up as a reason for Bolosonaro’s decision to approach Moro, the president became the target of critics who both bemoaned the conservative leader’s approach to the pandemic and his decision to interfere with Moro’s work.

But as this new crisis was brewing, the WHO changed its tone.

In an interview in late April, the WHO’s top emergencies expert Dr. Mike Ryan said that Sweden, the country that never issued stay-at-home orders to the general population, was a “model” for fighting COVID-19.

Instead of lockdowns, Ryan said, the country focused on the elderly and the vulnerable while not letting the economy come to a halt.

“What it has done differently is it has very much relied on its relationship with its citizenry and the ability and willingness of its citizens to implement self-distancing and self-regulate,” Ryan said. “In that sense, they have implemented public policy through that partnership with the population.”

In other words, allowing the Swedish population to self-regulate based on information coming from the government’s health officials is what made the country’s approach so successful.

Whether Ryan admits it or not, this statement goes directly against what WHO advisors claimed in the recent past as they called out for massive government involvement in order to contain the disease.

In an interview in late March, Bruce Aylward, the senior advisor to the WHO director-general, said that governments should keep populations under lockdown, adding that tracking citizens for testing purposes was also desirable.

He went on to praise China, which was then still under lockdown: “And if you look across China, across the 31 provinces, all of which were affected at one point or another, the longest and most difficult, of course, was Wuhan, which remains locked down. It will be nearly 10 weeks by the time they will have lifted there [sic]—all of February, March, and much of April.”

It was precisely this type of claim made by the WHO and its advisors that prompted Bolsonaro critics to attack him for his refusal to defend shutting down the economy.

Now, as Brazil’s National Congress evaluates the coronavirus-related impeachment request, Bolsonaro fights the Supreme Federal Court, which is barring his appointment to head the FP. This gives his critics reason to claim that he is using the coronavirus fight to push for a military takeover despite the fact that he does not have the full support of the military.

Instead, the president’s critics could be taking a closer look at the WHO’s change of heart, using the opportunity to reevaluate Bolsonaro’s approach to the lockdown.

Seeing the population’s growing discontent regarding the lockdowns, Governor Doria and São Paulo mayor Bruno Covas have recently distanced themselves from impeachment talks, focusing instead on what local and state officials have been doing to fight the coronavirus. And during the May Day weekend, Bolsonaro was celebrated by thousands of antilockdown protesters in Brasilia, the country’s capital.

“The destruction of jobs by some governors is irresponsible and unacceptable. We will pay a high price in the future,” the president told the crowd.

Although many have used these protests to claim that military dictatorship apologists are trying to use the COVID-19 lockdown to call for military interference, Bolsonaro has, for the most part, tried to fight against the shutdown by talking to governors directly.

Despite his best efforts, nothing has worked.

Now that working-class Brazilians are losing patience, with some even resorting to violence, Bolsonaro told protesters over the weekend that regardless of where governors and members of the judicial branch want to go with their lockdown orders, he will no longer let them “interfere” with his work.

“We want what’s best for the country. We want true independence of the three branches of power, and not just [an amendment] to the Constitution,” he told the crowd.

Adding that he “[prays] to God” that there will be no more pushback from the Supreme Federal Court, he concluded that he won’t simply “demand” but will make sure the Constitution is taken seriously.

Unemployment and Hunger, a High Price to Pay

It’s always difficult to guess a politician’s motivations, but regardless of what Bolsonaro is telling himself, he does appear motivated to spare the Brazilian economy. And for good reason. As in Mexico, poverty in Brazil is no joke. It’s not a matter of buying a smaller house or wearing off-brand clothes. In the developing world, poverty poses a serious and immediate risk to life and limb.

In America, the stay-at-home orders that largely impacted the healthy, locking scores of working men and women inside their homes, pushed unemployment to a record high.

In developing countries like India, hunger is now widespread. But even as children become the number one victims of the Indian government’s utter lack of respect for the basic moral principles rooted in the nature of man (known as natural law), few try to make the case for freedom and personal responsibility before tyranny in times of crisis.

Is Bolsonaro right for trying to stop widespread lockdowns? Was his instinct to try to shield the Brazilian economy from a potential catastrophe while focusing on protecting the vulnerable correct?

The answers may not be as straightforward as we might wish. But what is unquestionably true is that no government, whether local or federal, has a moral right to prevent individuals from exchanging with one another.

People own their bodies and their labor. Restricting their ability to act on their rights is by definition criminal, and the only reason why the coronavirus-fueled shutdown of the economy was never a sound decision.

Despite defending a series of flawed policies, Bolsonaro may be one of the few world leaders to have understood this.

Alice Salles was born and raised in Brazil but has lived in America for over ten years. She now lives in Fort Wayne, Indiana with her husband Nick Hankoff and their three children.