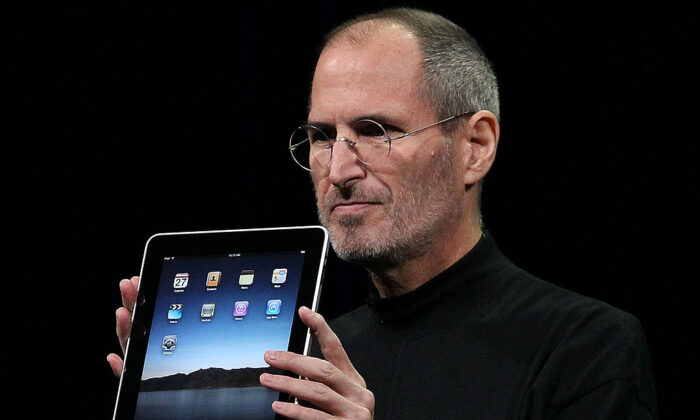 Apple Inc. CEO Steve Jobs holds up the new iPad as he speaks during an Apple Special Event at Yerba Buena Center for the Arts in San Francisco, Calif., on Jan. 27, 2010. (Justin Sullivan/Getty Images)
Health & Safety

Why Didn’t Steve Jobs Let His Children Use iPads?

How addicted are you to your cellphone? How much time do you spend in front of a screen? Would you let your children do the same? Steve Jobs thought it was not a good idea, so he did not let his children use iPads and iPhones, and technology in general.

In 2010, a New York Times reporter had a conversation that revealed a lot about the life of the founder of Apple. Nick Bilton commented, “Your kids must love the iPad, right?” after the launch of the device. Jobs replied: “They haven’t used it. We limit the amount of technology our children use at home.”

Any special reason? According to Walter Isaacson, the author of the Steve Jobs biography, the family focused more on history or reading, as well as activities that had to do with technology.

Isaacson explained: “Every night Steve insisted on dining at the big kitchen table, talking about books, history, and a variety of other things. Nobody ever took out an iPad or a computer. The kids didn’t seem addicted to the devices.”

It’s Not the Only One

A large number of CEOs and prominent figures of Silicon Valley companies significantly reduce the time their children spend in contact with technology.

For example, Bill Gates did not give his children cellphones until they were 14 years old. In addition, their use was prohibited during lunch, dinner, and before sleeping.

The recommendation of the American Academy of Pediatrics is to limit technology according to the age of the children, since there is a fear that the use of the devices will become compulsive and uncontrolled.

According to the authors of the book “Screen Schooled” and several former employees of technology companies, when devices are used compulsively, it ends creativity and limits social relationships.

What Do They Know That We Don’t?

Indeed, many people who have or had to do with technological development restrict its use at home. A former Google executive, Tristan Harris, even warned of the “tricks” that websites like Facebook or YouTube use to hold our attention without us noticing.

In 2020, the Netflix documentary “The Social Dilemma” caused a furor by revealing how social networks work and make us “addicted.”

There is a phrase that stands out in the film: “There are two industries that call their customers users: illegal drugs and software.”

The film describes the addiction and negative impacts of social networks in our daily life, which is closely linked to the devices with which we interact. In addition, testimonials in the film explain how social media companies play with our emotions and behaviors.

What Are the Risks?

Various studies indicate that addiction to screens leads to problems with concentration, vision, sleep, low tolerance for frustration and, in some cases, low self-esteem.