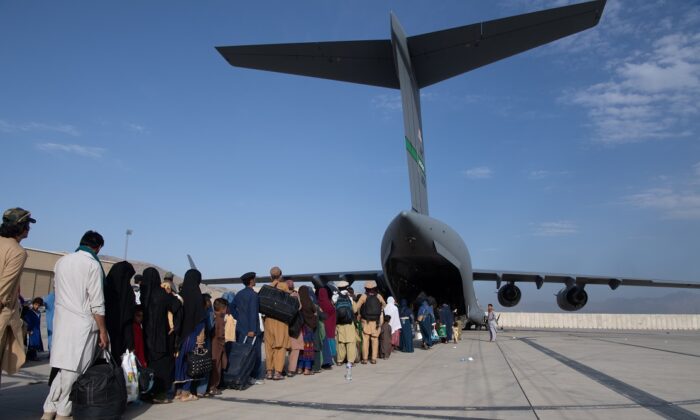 Why Did the Pentagon Agree to the Withdrawal From Afghanistan?

Instead, the Pentagon, apparently confidently, arranged to pull out U.S. personnel and some Afghans associated with the U.S. mission in the country.

Why did the Pentagon change direction? While the secretary of defense had changed (twice since the Trump-era interventions) and the new defense secretary was a Biden man, the chairman of the Joint Chiefs of Staff was the same man, and any defense secretary, even one who was a general before, would need to consult with the Joint Chiefs and other commanders, especially Central Command (CENTCOM), which has responsibility for both Afghanistan and the Middle East.

Assuming consultations took place, it would appear that the Pentagon brass was satisfied that the Biden administration had worked out a solid plan to leave Afghanistan.

It’s clear that pulling troops from a conflict zone has major strategic implications for U.S. force posture abroad and for U.S. relationships with allies and friends around the world.

It’s quite true that, after 20 years, the U.S. effort in Afghanistan had stalled. The small number of American troops still in that country were mainly providing training services, plus organizing contractor support and supplying intelligence to the Afghan military. The most important service of all, close air support, was the single commodity that equalized the fighting with the Taliban, which after all was an insurgency, not an opposing field army.

It’s also true that there was a consensus in Washington that the Afghan government was corrupt up to its armpits, and there was little hope for any improvement. That made it difficult for Washington to keep pouring billions into a government that was siphoning off millions of aid dollars.

For the past 18 months before the horrific events in Kabul, the United States suffered no military casualties. Fighting was mainly carried out by Afghan forces and the United States was in a support role, including close air help in firefights.

Therefore, the case to pull out was mostly about the realization that little future progress in the country was possible.

It isn’t clear whether Washington believed that without U.S. and allied help, that Afghan forces could prevail. Officially the Pentagon put out that it expected a good showing from the Afghan army—the same argument Biden made in his last phone call with Afghan President Ghani.

In a sense, whether the Afghan army could hold up didn’t matter and hadn’t since January 2019. The “core elements” of a deal with the Taliban were worked out then. What was agreed was that the United States would leave Afghanistan broadly in exchange for a Taliban agreement not to support terrorists such as al-Qaeda and ISIS.

It would seem there had to be at least three components to an implementation deal.

Firstly, the United States would leave all bases in Afghanistan preparatory to the final removal of U.S. personnel from Kabul.

Secondly, the United States would be allowed to take out U.S. personnel, including U.S. citizens and a limited number of Afghans who worked directly for the Americans. No deal appears to have been reached to protect Afghan government people or Afghan military leaders. Put bluntly, they were abandoned.

Thirdly, in exchange, the Taliban would do its best to assure security for the U.S. exit.

The United States would have had to go to its allies, especially the British, and get their agreement to the deal while also getting the Taliban to agree so that it covered the allies.

The deal went wrong for many reasons, not the least of which was the rapid collapse of Afghan government forces and the Taliban’s quick move to take over Kabul. Because of the chaos that ensued, the security situation rapidly deteriorated.

Had the Taliban really wanted the United States to leave quietly, they could have held off taking Kabul until the U.S. exit was complete. This was the first clear sign that the new U.S. partner, the Taliban, wasn’t going to make a strong effort to accommodate the United States and its allies.

While the White House, the NSC, the State Department, the Pentagon, and CENTCOM kept up pretenses that the United States was going to rescue all Americans and Afghan translators and top people who worked for the United States in the country, it was doubtful this could be done under chaotic conditions.

It’s possible, in fact highly likely, that Taliban assurances were enough to persuade the Defense Department to go along with the pullout.

The Pentagon leadership had no qualms in deserting their Afghan allies. CENTCOM quickly adopted new language, talking about their Taliban counterparts, praising Taliban help, and calling the Taliban “partners.”

The Defense Department, along with the rest of the Biden administration, was extremely foolish to put total trust in the Taliban. Even now, al-Qaeda personnel are being freed from Afghan prisons or reentering Afghanistan. So much for the “core principles” agreed to in 2019.

A proper deal would have insisted on the Taliban freezing in place until the U.S. withdrawal was completed. It would also have clearly included all of our clients and their families who wanted to leave. It’s quite apparent this wasn’t the case and it was a bad deal from the get-go.

Part of the reason the Pentagon went along with the Biden deal, aside from their perception it would be quiet and peaceful at least for the Americans, was that the geopolitical environment has changed very rapidly, and the United States has shifted its focus from “small wars” to near-peer or peer-to-peer conflicts, that is, to the threats from Russia and, most of all, from rising Chinese power.

Grinding down U.S. forces in unwinnable conflicts isn’t what the Defense Department wants to do these days.

Thus, the Pentagon chose realpolitik and decided to leave. Now, it is awash in accusations it left behind many friends and allies and U.S. citizens, that its operation was poorly planned, and that the Joint Chiefs and CENTCOM failed to challenge the Biden administration deal precisely because it was badly flawed from all angles.