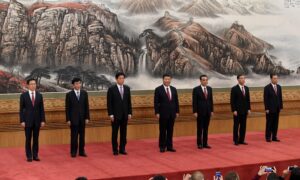 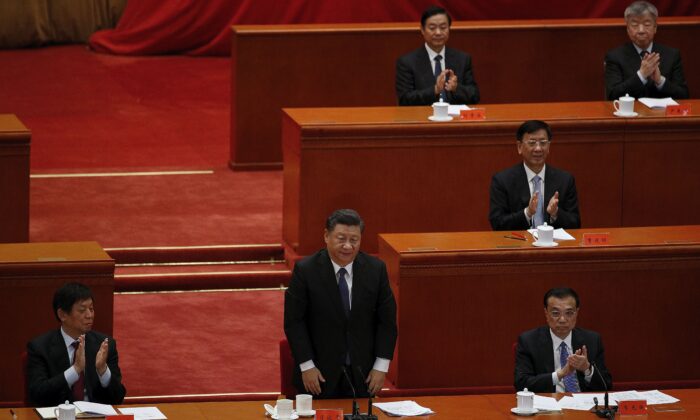 Chinese Communist Party officials applaud as leader Xi Jinping delivers his speech commemorating the 70th anniversary of the Chinese army entering North Korea, at the Great Hall of the People in Beijing on Oct. 23, 2020. (AP Photo/Andy Wong)
Thinking About China

Why Did the CCP Fifth Plenary Session Tout ‘Combat Readiness’?

According to the communiques issued from the Chinese Communist Party’s (CCP) fifth plenary session on Oct. 29, top officials highlighted “the need to strengthen combat readiness to improve the strategic capability of safeguarding the country’s sovereignty, security, and development interests,” as state-run media relayed.

The inclusion of the phrase “combat readiness” is especially interesting.

“Combat readiness” was first brought up by regime founder Mao Zedong while drawing up the 3rd five-year plan (1966-1970). Mao proposed “combat readiness” in October 1965 as a strategic economic plan to prepare the nation for confronting the Soviet Union. At the time, it had shifted its anti-American policy to anti-Soviet Union, competing for dominance as the international communist leadership. The CCP began to actively prepare for war with the so-called “third-front construction”: 13 provinces in the central and western parts of mainland China would be “the home front.” These regions were largely located in remote areas that lacked transportation and resources. Consequently, the initiative led to serious environmental destruction and waste of national resources.

Now, the regime has once again mentioned combat readiness for its 14th five-year plan, at a time when the CCP is faced with international scrutiny for handling of the pandemic and its espionage activities worldwide. Unfavorable views toward China have soared in the past year in the United States and many other advanced economies, according to a survey of 14 countries conducted by the U.S.-based Pew Research Center.

In this context, does the CCP’s “combat readiness” signal a threat to the free world?

In October 2017, Chinese leader Xi Jinping mentioned “combat readiness” at the 19th National Congress, the Party’s last major conclave. In his work report, he stated that Beijing had “undertaken major missions related to the protection of maritime rights, countering terrorism, maintaining stability, disaster rescue and relief, international peacekeeping, escort services in the Gulf of Aden, and humanitarian assistance.” At the time, the CCP faced criticism for its escalation of aggression in the South China Sea to stake claim over territory. For this reason, “combat readiness” was referring to Beijing’s militarization of the South China Sea for its hegemony. This triggered the free world, led by the United States, to oppose the CCP’s claims. U.S. Navy warships have since conducted many “freedom of navigation” operations to counter the CCP’s threats.

The communique also mentioned: “the meeting underlined the need to strengthen combat readiness to improve the strategic capability of safeguarding the country’s sovereignty, security and development interests.” Such language usually has to do with territorial claims. And the CCP is most interested in Taiwan and the South China Sea.

China’s “combat readiness” has put other countries on guard. For example, according to a report by Kyodo News on Oct. 14, the latest submarine of Japan’s Maritime Self-Defense Force, called the Taigei, was launched in Kobe.

Secondly, it has accelerated the pace of the international community’s ostracization. For example, U.S. Secretary of State Mike Pompeo announced at a press conference on Oct. 14 that more than 40 countries are members of the Clean Network initiative, which will commit to securing telecommunication networks from Chinese companies. They include EU and NATO members, as well as India, South Korea, and Japan.

Utilizing wolf-warrior diplomacy, the CCP has escalated tensions in the South China Sea, intensified the Sino-Indian border conflict, and imposed a national security law on Hong Kong. Coupled with the global pandemic caused by authorities’ coverup of the COVID-19 outbreak, “combat readiness” is only further deteriorating the CCP’s position in the world.

In this communique, “reform” was mentioned more than 17 times, in the context of “reform and opening,” “deepening supply-side structural reform,” “deepening reform,” etc.

Take supply-side structural reform (SSSR) as an example. It was first announced in November 2015 by Xi Jinping. However, the promised market-based economy has in reality been replaced by state-owned enterprises throughout these years. The market was only further distorted by the regime’s tightening control over private enterprises. The CCP is deceiving the public once again with its political slogans.

With the decline of China’s demographic dividend, coupled with the adverse consequences of the CCP’s one-child policy resulting in skewed demographics, the communique addressed the issue of the country’s aging population. Overseas investments have withdrawn from the Chinese market one after another following the Sino-U.S. trade war. Under such circumstances, China’s economy is headed downhill, and the structural flaws of the Chinese economy will only further intensify.

Now, the regime is touting a “self-reliant” domestic market to cover up for its embarrassments on the international stage. When will the CCP learn not to play by its slogans?

Huidong Zhang previously worked in China’s real estate and heavy industry sectors. He has contributed economy-related commentary to The Epoch Times since 2020.