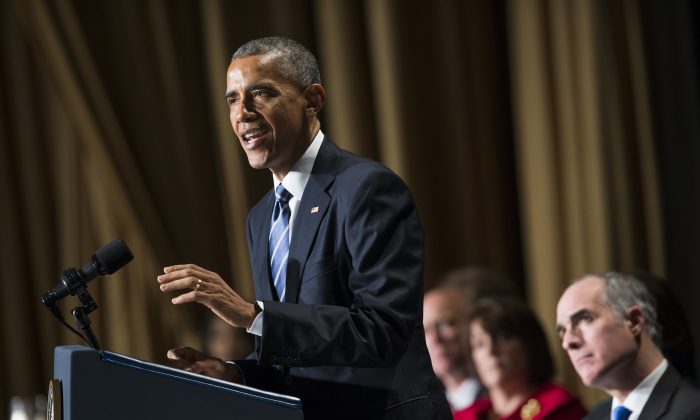 President Barack Obama speaks during the National Prayer Breakfast in Washington, Feb. 5, 2015. The president condemned those who seek to use religion as a rationale for carrying out violence around the world, declaring Thursday that "no god condones terror." (AP Photo/Evan Vucci)
US

Why Did Obama Compare the Crusades to ISIS?

Most of the media coverage of President Barack Obama’s attendance at Thursday’s National Prayer Breakfast at the Washington Hilton has focused on his special welcome for the Dalai Lama, who was in the audience.

However, the president’s speech further revealed his thinking about the roots of terrorism and hatred that reflect in his foreign policy decisions, as well as his handling of issues at home.

In a thoughtful piece by Juliet Eilperin in the Washington Post, Eilperin suggests the president has again dismissed American exceptionalism, and that “his fellow Christians, who make up a vast majority of Americans, should perhaps not be the ones who cast the first stone.”

The speech started fine, with strong condemnation for those who use religion to justify evil acts.

With reference to Boko Haram and the shooting of female student Malala in Pakistan, Obama speaks of the problems that happen with “faith being twisted and distorted.”

He speaks of ISIL, a “vicious death cult,” that carries out acts of barbarism in the name of religion.

He speaks of sectarian war in Syria, and the murder of Muslims and Christians in Nigeria, the rising tide of anti-Semitism and hate crimes in Europe, “so often perpetrated in the name of religion.”

He then turns closer to home and makes a reference to the Christian faith, the Crusades and the Inquisition, where “people committed terrible deeds in the name of Christ.”

In America he refers to slavery and Jim Crow as acts that were often informed by Christian beliefs.

This is not unique to one group or religion, he says, adding “there is a tendency in us, a sinful tendency that can pervert and distort our faith.”

Scholars hold differing views of the Crusades, which began in the Middle Ages in 1096 and of which there were several. Some see them as a defensive war against Islamic conquest and regaining access for Christians to the holy lands, and others see them as an aggressive papal-led expansion.

Crusaders were known for pillaging the lands they conquered, a practice typical for the Middle Ages.

Obama clearly believes that the crusades were wrong, but most of the criticism leveled at him after the speech was simply about the inappropriateness of his comparison to an event that happened hundreds of years ago to current events like the beheadings and terror perpetrated by ISIL.

In fact, Obama was offering a word of caution and an explanation for his hesitancy to engage Americans in more wars.

In her piece, Eilperin suggests that Obama’s remarks “spoke to his unsparing, sometimes controversial, view of the United States—where triumphalism is often overshadowed by a harsh assessment of where Americans must try harder to live up to their own self-image. Only by admitting these shortcomings, he has argued, can we fix problems and move beyond them.”

To this end, Obama prescribes two main remedies for remaining vigilant against tendencies toward hate and intolerance.

He suggests we start with basic humility, some doubt, and not being so full of yourself that we are right.

Second, he emphasizes the importance of distinguishing between church and state, and maintaining that separation so that individuals are free to believe as they choose.

He cautioned against allowing anyone to distort any religion for their own “nihilistic ends.”

He emphasized that the United States will continue to protect and “guard vigilantly” freedom of religion.

“Part of humility,” said Obama, “is also recognizing in modern, complicated, diverse societies, the functioning of these rights, the concern for the protection of these rights calls for each of us to exercise civility and restraint and judgment.”