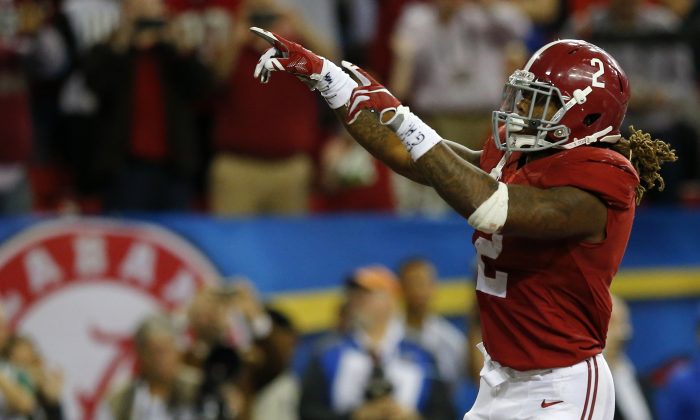 Why Derrick Henry Should (Narrowly) Win the Heisman

But for all intents and purposes, it’s really between the two running backs Henry and McCaffrey who rank 1-2 in the nation in rushing yards.

Comparing these two is easy. Separating them isn’t. But we’ll do it here.

What the Stats Say

Henry’s 1,986 rushing yards are an SEC-record and lead the country—as do his 23 TDs. But that’s really the only thing ‘Bama used him for, as his 97 yards receiving pale in comparison to McCaffrey’s 540.

Rushing-wise, McCaffrey is right behind him with 1,847 yards on the ground, but his main skill is his multipurpose ability. The versatile back—who also returns kicks and punts—set an NCAA record with 3,496 all-purpose yards, breaking Barry Sanders’s 27-year-old record. (FYI, Sanders did it in two fewer games, but who’s counting?)

Henry threw his hat in the Heisman ring on Nov. 7 when he rumbled for 210 yards in a win over previously unbeaten LSU. At the time, it was his second 200-yard performance of the season and he followed it up with 204 in a win over Mississippi State the following week, and then 271 (on 46 carries) in the Iron Bowl two weeks later against Auburn. Then in the SEC Championship game against Florida, he went for 189. Not bad.

Here’s another way to look at his season: Only four times did he fail to get 100 yards rushing, and three of those were to bottom-feeders Middle Tennessee (96 yards), Louisiana-Monroe (52), and Charleston Southern (68). Arkansas—which “held” him to 95 yards in Alabama’s 27–14 win—was the only Power 5 team to hold him under the century mark.

That’s rising to the occasion.

McCaffrey is no slouch to the big games either. The son of former NFL player Ed McCaffrey is fresh off a brilliant performance against USC in the Pac-12 title game where he ran for 207 yards, while also catching four passes for 105 yards in the Cardinal’s 41–22 win.

Here’s where Henry separates himself a bit.

At first glance, though, it actually looks like a toss-up. According to sports-reference.com, Alabama’s SOS ranked 17th while Stanford’s was 15th (out of 128 teams). But that doesn’t really account for how tough the defenses each back faced.

Looking at total defense, Alabama ended up facing three teams—Wisconsin, Georgia, and Florida—that finished in the top 10 in the country in allowing the fewest yards per game. Henry averaged 161.3 yards rushing in those contests (all wins), and even his worst performance was 147 in the victory over Wisconsin.

McCaffrey faced just one team ranked in the top 25 of total defense (Northwestern, ranked 11th), and the sophomore back finished with 66 rushing yards and 23 receiving yards in the 16–6 loss.