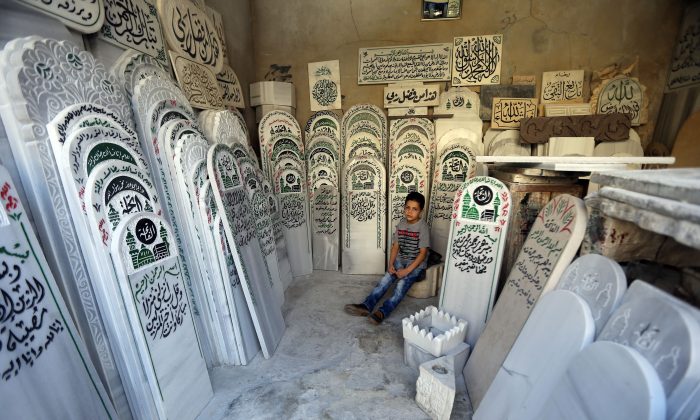 A Syrian boy sits at a tombstone shop at the entrance of a cemetery in Damascus on Sept. 23, 2015. (Joseph Eid/AFP/Getty Images)
Middle East

In a chaotic situation such as the war in Syria, it is nearly impossible to provide precise numbers of those killed and wounded in the fighting. Assigning responsibility for the casualties is harder again.

Nevertheless, the data we do have highlight the murderous response of the Syrian government to the crisis in which it is involved. It also serves to underscore the hyperbole surrounding the Islamic State (ISIS).

In the early days of the conflict, much of the bodycount work done was very detailed. Information was cross-checked with different sources and, where possible, the names of the victims and the date and location of their injuries or deaths included.

These groups regularly supply their findings to the international media and on their websites.

However, the United Nations gave up counting casualties in January 2014. Some of the organizations with which it had been cooperating at the beginning of the conflict favored the opposition. This reduced the reliability and value of the figures provided.

This concern has been supported by some media reporting which suggested, for example, that some of the deaths reported by the various monitoring groups as civilian deaths were deaths of fighters.

Even ISIS provides details on its website and in its annual reports of deaths of its own fighters and of casualties they have inflicted.

The non-profit Syrian Center for Policy Research estimated in February that about 470,000 have been killed since 2011. The Syrian Network for Human Rights estimates that roughly 200,000 civilians have been killed between March 2011 and till the end of 2015, and blame government forces for most of those deaths.

The United Nations estimated 250,000 killed in August 2015 but has since stopped counting. The Syrian Observatory for Human Rights has said more 370,000 people are thought to have been killed since the start of the Syrian revolution.

The range in figures is significant and, while it is not intended to disparage the work of these organizations, it does highlight the difficulties involved. The data available should be treated with great caution.

Who Has Killed the Most?

To go to the next step and assign blame for these deaths is even more fraught.

Such a claim is nearly impossible to check with any precision, but it has been widely reported in Western media that deaths from government attacks are much higher than from ISIS.

While not questioning the claim that Syrian government operations have resulted in a high number of casualties, we rarely hear the government’s side of the argument. The regime regularly provides casualty figures of its own forces and opposition groups but these tend to be ignored in the West.

We should be careful not to minimize the impact of ISIS. The group was a relatively late entrant to the Syrian massacre and it was not until around 2014 that the organization began to exert a major influence on the battlefield.

Before that, other groups—such as Jabhat al-Nusra and Jaysh al-Islam—were active and responsible for many atrocities. Those groups and many others are still active in cooperation with or in rivalry with ISIS.

On the other hand, such an imbalance does not fit comfortably with the military defeats reportedly suffered by government forces or by reports of major losses incurred by the government. These are thought to be considerable.

We may have reached a point where precise numbers are not particularly relevant. It may be more useful to look at policies and tactics, such as the blockading or bombarding of towns and villages by both sides. These practices in themselves constitute sufficient grounds to condemn their perpetrators for violations of international law and norms.

Anthony Billingsley is a senior lecturer at the School of Social Sciences, University of New South Wales, Australia. This article was originally published on The Conversation.