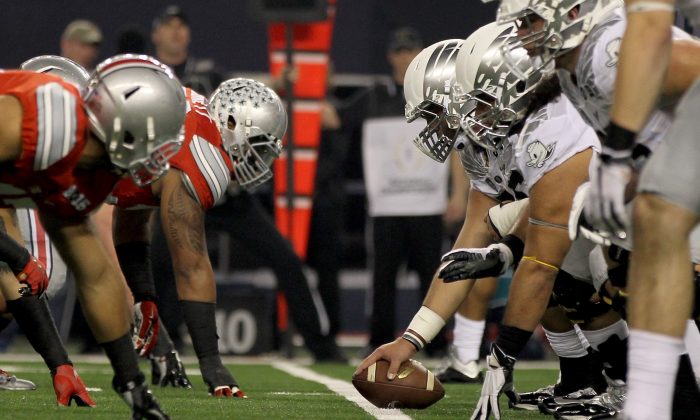 First, let’s get this out of the way: The current four-team CFP is better than the previous BCS two-team version.

That said, it could be better—like twice better. An eight-team playoff system would work best with five automatic bids (the winners of each of the Power 5 conferences) and three at-large bids. This should be implemented immediately. Why? Let’s go down through the reasons:

1. Each of the Power 5 conferences has representation

Last year, there were four spots for six really deserving teams. Unfortunately, the Big 12 got the short end of the stick as Baylor and TCU were left on the outside looking in. If we thought that wouldn’t happen again, we still have five big conferences—plus Notre Dame—looking for representation among the four spots. That will be an annual problem that’ll never get solved unless we have more spots—or get rid of a major conference.

Eight spots means that the committee only has to worry about three at-large teams, instead of four. Will there be debate for those spots? Of course. But at least if a seemingly deserving team (from a Power 5 conference) got the short end of the stick, it’ll be because they didn’t follow the directions for the automatic bid.

This also gives some of those smaller schools (Boise State) a better chance to get in.

2. Automatic bids put the onus off the committee to get the right teams in

There was a joke made by a baseball player a number of years ago saying that MLB should lengthen the distance from home to first from 90 to 91 feet to take care of there being so many bang-bang plays.

There will always be debate over at-large bids. The NCAA’s field of 68 always has some controversy over which should be that final team, but at least it’s not a team that’s considered one of the five best in the country like either Baylor or TCU was last year. (FYI, TCU went on to crush 9th-ranked Ole Miss 42–3 in the Peach Bowl, while Florida State lost to Oregon 59–20 in the playoff opener.)

3. It won’t water down the regular-season competition

This year there are 127 teams in the FBS, and every Saturday we’re glued to our TVs watching the best take on each other. It’s called school pride, and just because we expand the playoff field from four to eight teams—meaning 6 percent would get in—it doesn’t mean there’ll be any less excitement.

As much as college football owns Saturdays in the fall, the NFL owns Sundays and it has 12 spots for 32 teams—meaning 37.5 percent get in—yet no one complains of a watered-down regular season there. Every game still means something.

4 Scenarios That Would Throw the CFP Selection Into Chaos

4. Three rounds are better than two

An eight-team field would mean seven games instead of three. That’s a significant amount more money to be made, and there’s not a player who’d mind playing more football or a fan who’d mind watching more. It’s win-win.