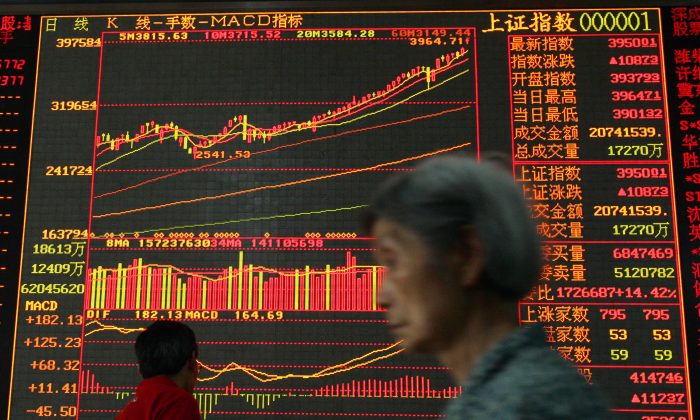 An investor walks past stock index a securities company in Wuhan, China, in this file photo. (China's stock rally will likely see intense turbulence in the near future. China Photos/Getty Images)
China

Questions have been raised about about China’s economic data for years—but it’s not every day that a top Chinese audit official speaks out about the problem.

Dong Dasheng, the former deputy auditor at China’s National Audit Office, and a member of the Chinese People’s Political Consultative Conference (CPPCC), a largely ornamental advisory body, made some bold remarks on the issue at a CPPCC session on March 4.

The conference meets yearly in Beijing, along with the legislature, the National People’s Congress.

Dong’s admission that the practice of faking economic data has been rampant in China for years likely ties into a general move by Chinese officials to dampen expectations for future rapid growth. This includes giving cautious guidance on economic figures, and seeking to de-emphasize the recent chatter of China being the world’s second largest economy.

“Many of the numbers are watery,” Dong said—meaning that numbers are faked or exaggerated. He added that the faked numbers are wide in scope: including the growth rate of the gross domestic product, fiscal revenues, credit data, import and export data, and more.

China’s official figures said the GDP growth rate was 7.4 percent in 2014, the lowest record in 24 years. However, Dong said the number is still far from the truth, but “relatively more realistic comparing to the numbers in the past years.”

A number of economists have indicated that China’s real growth rate over the last few years may only be around 4 percent—and is set to drop still further as inefficient, investment-driven growth bottoms out.

Dong recounted some of the conversations he said he had with officials around the country, the people in charge of massaging the numbers to fit in with the positive propaganda on the economy.

“The numbers in the past years were turned up too high. If you brought it down at once, it would be like diving off a cliff. So we need to gradually digest it year by year,” Dong said, paraphrasing what he heard from a local official.

That Chinese economic data is faked is no surprise, given that economic growth—and the perceptions of it—has been one of the foremost political tasks of the Chinese Communist Party for the last several decades. The Party has largely staked its legitimacy on successful economic development, meaning that local officials pursue policies that boost GDP numbers even if they are not economically productive. Local officials are also widely believed to manipulate the figures, and anecdotes have emerged of threats to enterprises to ensure that they submit only “good” numbers.

Dong’s admissions are among the first public remarks on the fabrication of economic data by a Chinese official. Even though Western (and many Chinese) economists have long viewed official data with some skepticism, the most oft-cited anecdote of internal mistrust of the numbers came from Chinese Premier Li Keqiang who, before he was premier, told the U.S ambassador in 2007 that China’s GDP is a “man-made and therefore unreliable.” As the Communist Party chief of Liaoning Province at the time, Li’s remarks were recorded in the memo of a U.S. diplomat, which was made public by WikiLeaks in 2010. Li, it turned out, looked at electricity and rail transport data for a better proxy of economic growth.

Other aspects of Chinese data have been questioned recently—including the oft-cited claim, for example, that China’s economic growth has been an average of 10 percent a year over the past three decades, which would make it the fastest growing economy in recent times.

In a paper published last year, economist Harry X. Wu, a senior adviser to the New York-based research group The Conference Board, estimated that China’s growth was more likely an average of 7.2 percent annually from 1978 to 2012—lower than Japan and Taiwan.

Earlier in February, Chinese state news media Xinhua reported that faking economic numbers is rampant among local governments. In order to bolster the political prospects for provincial leaders—whose promotions are tied to the appearance of robust growth—production data can be adjusted upward by orders of magnitude, and revenues counted from enterprises long bankrupt.