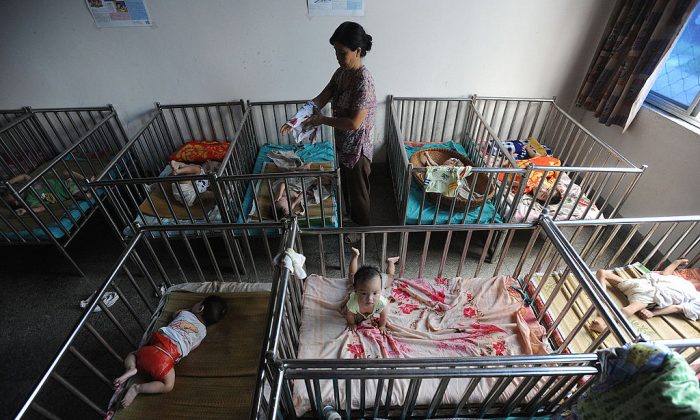 A Chinese worker cares for the babies at an orphanage in Wuhu, in eastern China's Anhui province on August 7, 2009. (AFP/AFP/Getty Images)
China

Why Chinese Buy Trafficked Babies Instead of Looking in the Orphanage

For foreigners looking to adopt Chinese babies, state orphanages are the first stop, but Chinese themselves rarely look there, preferring instead to use social media and other informal—but illegal—channels to find children to take in as their own.

“Baby girl, delivery expected at the end of October,” says one classified ad in a discussion group on WeChat, a popular social media platform. “The parents have decided to give up the child because of unexpected family events; we can provide legal documents.”

A recent investigation by the state-run Beijing Times yielded this and similar messages on social media in China, uncovering networks of parents and middlemen offering the unborn and newly-born for adoption.

But the phrase “legal documents” is altogether misleading, as arranging adoption online is in fact against the law and prospective parents do not register their new children with the authorities.

Three reasons stand out in particular, painting a dismal picture that highlights the consequences of China’s three-decade-long one child policy combined with a for-profit state mechanism.

Abandoned children who are healthy—but abandoned because of their gender or because their parents lack the financial needs to raise them—often do not end up in orphanages. According to a 2013 report by People’s Net, the online edition of state media People’s Daily, some hospitals illegally sold abandoned children like merchandise, and they would avoid reporting such cases to the police or taking the children to state care.

In general, Chinese parents looking to adopt prefer a healthy boy, mostly so they can have someone to provide for them in old age (China has vastly shrunk its social welfare programs). They are, however, unlikely to find them in orphanages where children tend to be female, a consequence of China’s draconian population controls where parents tended to abort or abandon girls in favor of sons.

They are also unlikely to find healthy children. According to a report by state-run China Central Television (CCTV) in 2012, at some orphanages 90 percent of the children were disabled, abandoned by their birth parents for want of means to treat their condition.

But perhaps the greatest motivation is cost.

A case of collusion behind family planning officials, the workers tasked with enforcing China’s one-child policy, and orphanage staff revealed an institutional problem—orphanages across the country try to maximize their earnings from “donations” given by foster parents.

In 2009, Chinese media Southern Metropolis Daily reported that family planning officials in Guizhou, a province in southwestern China, separated three girls from their parents because they didn’t have the money to pay the penalty for having more than one child. The orphanages in turn found adoptive parents for the girls overseas.

Zhang Wen, a former adoption social worker in the United States, told the Southern Metropolis Daily that overseas parents were required to give donations to orphanages when they adopted.

According to news site NetEase, some orphanages sought overseas adoption because of a lack of funding from the Chinese authorities.

High adoption fees turn away many adopting parents in China, with some orphanages charging about 10,000 yuan (about $1,500) for a child. Some charge the same amount needed for overseas adoption.

In 2009, Chen Zaihua, a resident in Nanjing, lost his adopted child Yan Yan after one year  when the orphanage informed him that a French family was willing to pay more for the child.

On Zhihu, China’s equivalent of Quora, a user said it was cheaper to buy a boy illegally than to adopt a girl out of an orphanage.

The one child policy, which was implemented in 1980 and replaced by a two child policy last year, exacerbated the traditional preference for sons to pass down the family name. Parents with only one chance for a son aborted or abandoned millions of baby girls, leading to an imbalanced sex ratio.

“We are a couple in our forties and we don’t have a child. We hope to adopt a boy,” a request on WeChat reads.

The gender gap is causing millions of Chinese men difficulty to find wives, leading to an upsurge in kidnapping and trafficking of girls and women.

So ends the adoption offer for the girl who will be born in October: “Don’t respond to this message if you are a human trafficker or if you cannot provide a child with kindness.”