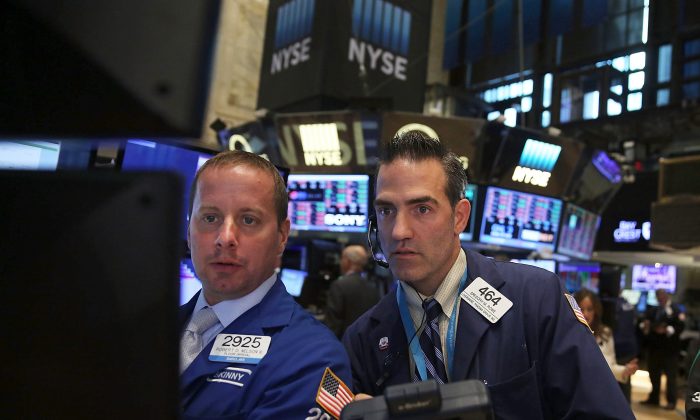 Traders on the floor of the New York Stock Exchange on Sept. 1, 2015. (Spencer Platt/Getty Images)
Opinion

U.S. stocks have endured a lot of turmoil, but recent shocks have made apparent important facts about China and the shifting global economy long ignored by many analysts and investors. Those bode well for America, and the bull market should soon resume.

Only 39 percent of Chinese shares are actively traded, with the balance held by government entities or company founders, whereas 94 percent of U.S. shares are in the active marketplace.

As of June 8, the Shanghai Composite Index was up 250 percent over the prior 12 months, then it plummeted 37 percent before stabilizing somewhat at the end of last week. That respite, however, was accomplished after Beijing again flooded markets with liquidity.

Chinese company reports and stock-market valuations are as fraudulent as China’s gross-domestic-product statistics.

Recently, Beijing opened the Shanghai and Hang Seng markets to selected foreign investors, but they have remained shy about jumping in—and for good reason. Chinese company reports and stock-market valuations are as fraudulent as China’s gross-domestic-product statistics.

The flood of cheap imports at Wal-Mart (WMT) and size of China’s official U.S. dollar holdings testify to the heft of its economy. Official measures of GDP and growth are inflated and don’t jibe with indicators economists use to measure economies with dodgy statistics such as freight shipments, passenger travel, electricity use, and property development.

Beijing reported 7 percent growth for the second quarter, but actual growth was about half that. If the money-losing “zombie factories,” propped up by government bank loans, were shuttered, the pace would be even lower.

China’s economic strategy of yuan devaluation, government bank lending to favored enterprises, and compelling Western companies to transfer know-how to gain market access is running out of gas, much like in the Soviet Union in the 1970s and Japan in the 1990s.

Beijing reported 7 percent growth for the second quarter, but actual growth was about half that.

Since Alexander Graham Bell, hungry entrepreneurs such as the ones who founded Apple, Google, and Twitter have been the real instigators of progress, not mega-companies such as IBM and Hewlett-Packard. In China, big state-owned enterprises and private businesses favored by Communist Party bosses specialize in winning political favor and protection, not sweating out tough-to-solve problems.

Moreover, Western companies are quite adroit at keeping the important secrets to themselves. Consider how many joint ventures Beijing has forced with Western automakers, yet indigenous Chinese firms still have not learned how to make an exportable vehicle.

Finally, in the technology sector, Beijing’s penchant for censorship, secrecy, and control will surely place an additional burden on technology transfer and innovation.

Beijing’s penchant for censorship, secrecy, and control will surely place an additional burden on technology transfer and innovation.

The shift in China toward a more consumer-driven and service economy may be bad news for companies and countries that pump oil and mine copper, such as Exxon Mobil or Zambia, but it is good news for American technology companies ranging from those pioneering radical new ways to make goods like 3-D printers and path-breaking products like electric cars.

As U.S. markets recover, winners will emerge among tech startups. Many will be old-line firms such as Ford, which is betting big on making the automobile a nexus of high-tech consumer products, and Google, which caters to consumers worldwide by constantly delivering more value through constant innovation.

The U.S. economy won’t be much hurt by China’s slowdown because China has purchased much less in the United States than it sells here. For whatever growth China enjoys, however, it will have no choice but to do business with America’s innovators.

The U.S. economic recovery and stock prices should follow up on those trends.

As China changes its focus, its economic development will pose less of a risk of further losses in U.S. manufacturing jobs and create even greater reliance on Western know-how in rapidly changing technology sectors. That will give new impetus to U.S. corporate profits and investments in R&D and push up U.S. stocks and growth.