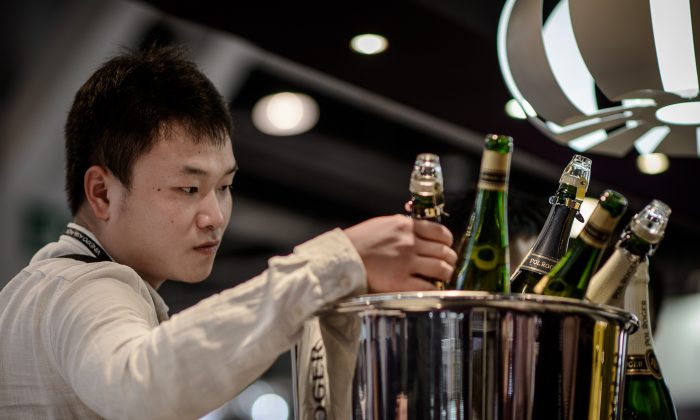 A visitor is checking bottles of Champagne at the Vinexpo Asia Pacific in Hong Kong, on May 27, 2014. On the international financial change, China is very close to pop the Champaign at the end of the year. (PHILIPPE LOPEZ/AFP/Getty Images)
Business

There are many steps China has taken to get into the U.S.-led International Monetary Fund. One of the key pieces of the puzzle will likely come to fruition later this year: China’s inclusion in the fund’s own reserve currency, the Special Drawing Rights (SDR). Right now, these drawing rights are made up of the U.S. dollar (47 percent), euro (34 percent), pound sterling (12 percent), and Japanese yen (7 percent).

As usual with the IMF, this is more a matter of status rather than practical value—there are only $285 billion worth of SDR in circulation worldwide. In addition, the SDR isn’t real money but merely the claims on an amount of dollars, euros, pounds, and yen—if they should ever be exercised.

It should increase the demand of yuan worldwide as a reserve currency.
— James Nolt, World Policy Institute

“As a matter of law and regulation does it achieve anything? I don’t know, it’s largely a matter of prestige,” says Chris Powell of the Gold Anti-Trust Action Committee.

However, for China, it would mean international recognition for its currency and by extension for its economy. The country this year has officially asked to be included in the SDR, which is formally reviewed at the end of the year. The IMF has signaled that China’s bid will probably be accepted and even U.S. officials have admitted in private that the United States is not against it.

“At the moment the Chinese want to establish the yuan as a reliable, stable, and global currency. That’s one of the top priorities of the Chinese leadership,” says Ronald Stöferle, managing partner at European asset manager Incrementum.

What the inclusion in the SDR does not do, however, is give the Chinese more capital and voting rights at the IMF. “Those two issues are dealt with in the context of the IMF’s quota and governance reform,” said IMF spokesman Dezhi Ma.

Nobody knows when the next review will take place. As of now, the IMF is still working on implementing all the reforms it decided on during the last review in 2010 and has delayed a new review until the work is complete. The deadline for this is June 30.

Although the IMF has gradually removed opposition to including the yuan in the SDR, for example by saying the currency is no longer undervalued, other pieces haven’t proceeded as smoothly.

For example, the executive board of the IMF was supposed to meet in May to discuss China’s aspirations, but the meeting has now been postponed.

This does not mean the process will be stopped, as there is more time until the formal review in the fall. However, it gives China more time to comply with other reforms and it won’t have to disclose sensitive data, like its current gold holdings, until the very last moment.

The timing of the closed-doors agreement could also include an increase of China’s voting rights during the next quota review.

“It would have to be a negotiation. There has to be a quid pro quo. This will be comparable to China’s ascension to the World Trade Organization,” says Nolt. He thinks the United States is supporting the application but only if certain requirements are met. Postponing the meeting would give both parties more time to reach an agreement.

“American financial companies are interested in greater access to Chinese capital markets. I don’t think it would be a big sacrifice. There is certainly a deal to be made where all parties see it as a plus,” says Nolt.

However, an agreement will have to be reached this year, as the IMF only reviews the SDR basket every five years. Technically, it could also do an ad hoc review, but this would be hard to achieve diplomatically and difficult to reconcile with the time table for the next quota review. As for China, the moment seems to be ripe in 2015.

It would have to be a negotiation. There has to be a quid pro quo.
— James Nolt

IMF spokesman Gerry Rice recently noted that the most important criterion for SDR ascension is the so-called free usability. The currency needs to be “widely used to make payments to international transaction, and is widely traded in the principal exchange markets,” according to the IMF.

The yuan has gained as a global trade currency and China has established clearing centers worldwide to fulfill this criterion.

“For transactions in foreign currencies everything is about capital flows. Foreign exchange values are driven by capital flows. They are the key to the viability of a reserve currency and nobody wants a currency that doesn’t have a financial depth to it,” says Nolt.

However, China’s capital account is still closed, restricting transfers in and out of the country, and the yuan is lagging in the use of derivatives as well fixed income securities.

Given the rather vague criteria put forward in IMF protocol, it will ultimately come down to China and the United States hashing it out. “I am certain that the yuan will be included in the SDR going forward,” says Stöferle. “There will be a decision made in September or October.”