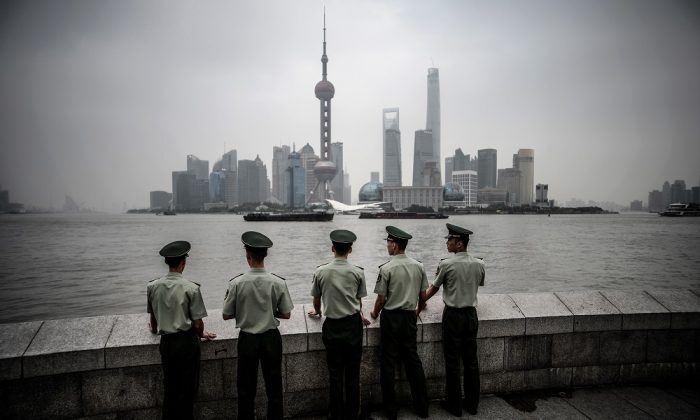 Paramilitary policemen stand in front of the skyline of the Lujiazui Financial District in Pudong in smog in Shanghai on Sept. 29, 2014. (JOHANNES EISELE/AFP/Getty Images)
China-US News

The motive behind the economic plan

The Chinese Communist Party (CCP) wants to turn China into a “manufacturing superpower”: a country so advanced in tech manufacturing that it dominates global high-tech markets and replaces foreign competitors.

According to a 2016 analysis of the plan by the Mercator Institute of China Studies based in Germany, “the goal is essentially to build an economic structure and capabilities similar to that of Germany and Japan: a strong industrial country based on a robust and innovative manufacturing industry.”

The program builds on existing industrial policies, but with deeper coordination among numerous state agencies. Made in China 2025 is now a critical part of the Chinese regime’s national strategy.

To achieve the goal of controlling global supply chains as quickly as possible, the Chinese regime has one chief method: direct both state-owned and private firms to invest in and acquire foreign companies for the purpose of stealing their technological innovations.

After the plan was released, Chinese investments in foreign firms—especially German ones—specializing in automation and digitization of industrial production increased significantly, according to the Mercator Institute.

China’s global investment numbers also reflect this priority: In 2016, the top two industries in which Chinese firms engaged in foreign acquisition deals were manufacturing (at about $30 billion) and information technology/software (about $26.4 billion), according to the Taiwan-based Chung-Hua Institution for Economic Research.

Another strategy the Chinese regime employs is pressuring foreign firms doing business in China to transfer their tech knowledge to their Chinese joint-venture counterparts. This is often done in exchange for giving the companies access to the Chinese market.

A recent report on China’s intellectual property theft practices published by the Office of the U.S. Trade Representative found that for U.S. companies that are the focus of the Chinese regime’s industrial policies, the pressure to transfer technology was “particularly intense.”

A 2017 U.S. government survey of the U.S. integrated circuit industry found that 25 companies had to form joint ventures with Chinese entities and transfer their technology.

European firms also feel the same pressure. The EU Chamber of Commerce in China released a 2017 business confidence survey in which the highest percentages of respondents were in sectors targeted by the Made in China 2025 plan: 31 percent in aerospace and aviation, 23 percent in machinery, and 21 percent in automotive/auto components. Overall, 17 percent of respondents said they had to transfer their technology.

The Chinese regime sees upgrading its manufacturing sector as a critical part of surviving in the modern economy and successfully competing “with other established rivals in the world,” as an article in the state-run newspaper China Daily put it. The state is trying to escape the fate of the “middle-income trap”: a phenomenon whereby after reaching middle-income levels, a country’s growth stalls and cannot make the leap toward becoming an advanced economy.

So, instead of the low-end manufacturing of basic goods like clothing and shoes that China is known for, the regime wants to primarily produce high-tech products. That feat is easier said than done, though, with China still lagging in technological advances.

Meanwhile, foreign companies that once relied on China’s cheap labor to produce their goods are now looking elsewhere. Rising labor costs and land prices have prompted many firms to move their factories to Southeast Asian countries such as Vietnam, Bangladesh, and India, where operating costs are lower.

A 2011 Boston Consulting Group report also found that with higher U.S. productivity and rising operating costs in China, the cost gap between manufacturing in China versus the United States will shrink, making it increasingly lucrative for American firms to reshore.

Communism Is the Core Problem

There is an idiom in Chinese of “asking a tiger for its skin.” The idiom can be compared to the United States asking the CCP to play fair in business. Just like the tiger needs its skin to survive, so too does the CCP need theft and unfair practices to compete.

China is still very much a communist country, and the CCP maintains tight control over every part of the country. Children are indoctrinated with Party slogans; companies with more than 50 employees are required to have Party liaisons; the General Political Department is tasked with indoctrinating the military with communist ideology; and other areas of the country have similar programs.

Among the CCP’s many slogans are “Maintain maximum alignment with the Party’s Central Committee” and “Carry out the Party’s command if you understand it. Even if you do not understand, carry it out anyway and your understanding should deepen while carrying out the orders.”

Under communist ideology, there is no concept of personal property, and under its systems, struggle between countries, companies, and even regular people becomes the common way of life. The general concept is that if something can be taken, then take it; and it holds that lies and deception are acceptable methods to achieve its goals. Among the CCP’s main slogans during the Cultural Revolution was “Battle with heaven, fight with the earth, struggle with humans—therein lies endless joy.”

Economic theft is directed by the CCP, with goals laid out in its five-year economic plans. The Made in China 2025 program continues similar CCP programs for economic theft, including its Project 863 policy, its Torch Program, its 973 program, and others. The book “China’s Industrial Espionage” by William C. Hannas, James Mulvenon, and Anna B. Puglisi states that “each of these programs looks to foreign collaboration and technologies to cover key gaps” and encourages Western-trained experts to serve the CCP, either by returning to China or by “serving in place.”

A 2011 report from the U.S. Office of the National Counterintelligence Executive says Project 863 “provides funding and guidance for efforts to clandestinely acquire U.S. technology and sensitive economic information.”

There Are No Real Private Companies in China

On the surface, the Chinese regime has allowed for some market principles to be introduced in China following economic reforms in the 1980s. In reality, the communist system does not allow for true private ownership.

The Chinese regime views all tech innovation as essential to its national interests. Thus, private and state-owned firms alike do the bidding of the Chinese regime. When it comes to foreign investments in the high-tech sectors prioritized in Made in China 2025, the regime directs Chinese firms on where to invest, for its own benefit.

As the Mercator Institute analysis demonstrates, the Chinese regime often hides its involvement. “Sovereign investment funds and governmental investment management companies play an increasing role in high-tech FDI [foreign direct investment],” the report reads. “While these funds and their management often present themselves as private enterprises, the state’s active role is concealed behind an opaque network of ownership and funding structures.”

For example, JAC Capital acquired the Dutch semiconductor firm NXP in 2016. Fifty-one percent of JAC is owned by an investment vehicle of China’s State Council, the regime’s chief administrative agency.

Also in 2016, the state-backed National Integrated Circuit Investment Fund (IC Fund) bought a 4.29 percent stake in Apex Technology, a Chinese investment consortium—just before Apex acquired Lexmark International, an American printer maker. According to a report on Made in China 2025 by the U.S. Chamber of Commerce, investor relations forms had revealed that “the IC Fund cooperated with Apex not only as a financial investor, but also in the hope that Apex would carry out China’s national strategy.”

In September 2017, U.S. President Donald Trump blocked the deal, citing national security concerns. After all, developing the semiconductor industry is high on the Made in China 2025 priority list; China currently relies heavily on imported chips, one of the country’s biggest import categories.

Why China Needs to Steal Technology

The communist system does not allow for true innovation

The Chinese people are known to excel in education, and they constitute one of the largest ethnic groups engaged in university study abroad programs in the United States. So why is it that the Chinese regime has become so infamous for stealing intellectual property to boost its economy?

The problem is not with the Chinese people, who maintain to an extent the family values and work ethic of Chinese traditional culture. Instead, the problem lies in the Chinese regime, its communist views on intellectual property, and its system of corruption that allows for and even endorses such activities

Under the CCP, which encourages struggle and deception, investment in innovation and the development of unique intellectual property is a losing prospect. If a company spends time and money on research and development, the resulting product will be copied by competitors soon after its release. Because of this CCP culture of theft, research and development is thus a dangerous investment for the survival of a business.

Due to the lack of independent innovation, the CCP has been forced to fill the gap by investing in research and development programs. Yet, with state funds flowing through numerous levels of bureaucracy, the money often doesn’t end up where it’s intended; and in state-run companies, where there is little prospect of rising through the ranks without engaging in corrupt dealing, it’s common for employees to not apply themselves and to ride out the waves of state financing as long as possible.

The CCP is aware of this problem, and because of it, despite having a large population of skilled people trained in research, the CCP still relies on snatching up foreign innovation through programs like Made in China 2025 and Project 863.

It’s because of this competition for low-cost production that modern Chinese products are likewise of shoddy quality.

Both of these elements have affected the CCP’s push to create respected local brands, and its attempt to break into the luxury goods and high-tech markets. The corrupt culture of the CCP is the cause of poor research and development, which leads to its programs of intellectual property theft. The CCP culture is also the cause of poor product quality, which has likewise diminished perceptions of Chinese brands.