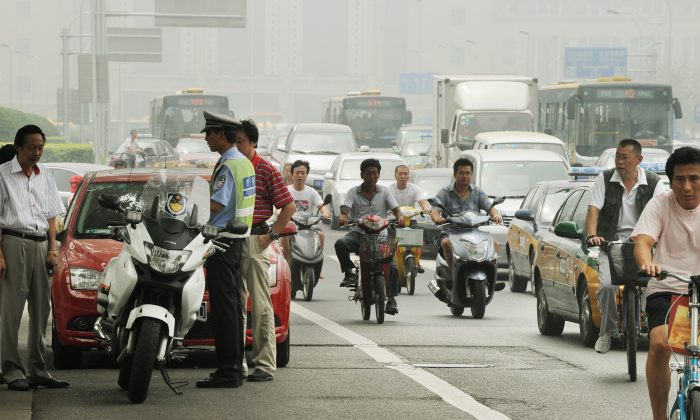 A Chinese policeman tries to resolve a traffic dispute between the driver of a luxury Porsche and another car after an accident in Beijing on Aug. 9, 2011. For the past decade China has had the highest annual number of traffic accident deaths in the world. (Mark Ralston/AFP/Getty Images)
China

Why China Has the Highest Traffic Fatalities in the World

Although China did not have the highest number of vehicle registrations in the world, it has held the record of having the highest road accident fatalities in the world–every year, for the past decade.

According to a March 2012 Guangzhou Daily report, China had 104 million car registrations in 2011, but 62,000 deaths from road accidents. During the same year, Japan had over 70 million registered cars, but only 4,611 people died. In the United States, 285 million cars were registered, and 42,000 people died in road accidents.

One of the reasons for China’s high road accident fatalities is that many people don’t go through the driving test. According to China’s traffic regulations, one must attend a driver’s education school and then pass a driving test to get a driver’s license. But everyone in China knows that quite a few people buy a driver’s license through connections. With law enforcement being quite lax in this regard, most people learn how to drive by themselves or get some informal training from a friend after purchasing a car.

It’s not uncommon to see people in China jaywalking, taking short cuts, or scaling fences, regardless of the existence of overhead passages and pedestrian crossings.

In 2011, among the traffic accident fatalities, the number of pedestrians dying from violating traffic regulations accounted for one fourth of total traffic fatalities nationwide.

Many highway road signs are also too complicated. Some signs have 20 to 30 characters, making it difficult for drivers to absorb the information.

Light traffic fines in China are ineffective in deterring traffic violations such as speeding. According to a May 2009 Hangzhou Net News report, six children from rich Chinese families raced on the road from Italy to France in their Ferrari and Lamborghini, with speeds reaching 229 km/hr. The local court fined them an equivalent to 1.31 million yuan (US$210,000). In China, however, a similar offence will result in only 3 demerit points on one’s driver’s license and a fine of just over 100 yuan (US$16.26).

Translation by Billy Xu and Tan Hohua. Written in English by Gisela Sommer.