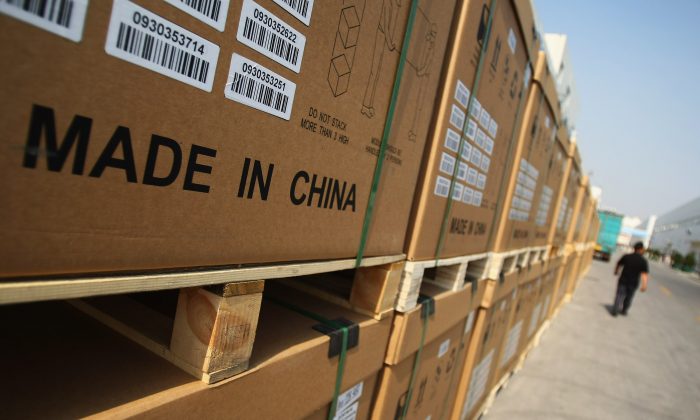 A man passes the photoelectric board products cased at the plant of Tianwei Yingli Green Energy Resources Co., Ltd on June 24, 2009 in Baoding, China. China is in no position to lead globalization in place of the United States, argues He Qinglian. (Feng Li/Getty Images)
China

Why China Cannot Lead Globalization in a Post-Trump World

U.S. President-elect Donald Trump has finally announced his intention of abolishing the Trans-Pacific Partnership (TPP) after taking office, leaving some countries in despair. Chile and Peru finally joined alternative trade agreements in the Asia-Pacific region led by China. The world reluctantly realized that Trump, who advocates U.S. interests as his priority, may vacate the position of a benefactor “World President.” Britain’s Financial Times split that position between China and German Chancellor Angela Merkel. In two articles, titled “China Pledges to Lead the Way on Global Trade” and “Merkel takes liberal-democratic stand in post-Trump world,” it granted the mission of economic globalization to China, and the succession of Western values ​​to Merkel.

China Has Benefited the Most From Globalization

In August 2016, I quoted the results of a study published by former World Bank senior economist Branko Milanovic and Yale University political science professor John E. Roemer. It states that two developing countries, China and India, are experiencing rapid economic growth under the trend of globalization, while in developed countries the gap between rich and poor has widened. The study leads to the dire conclusion that, although globalization will inevitably lead to the rise of the world’s overall income and the narrowing of the global income gap, it has worsened inequality in developed countries. In developed countries, globalization may therefore be perceived as creating a more unequal world.

Another study by Justin Pierce, an economist at the Federal Reserve, and Peter Schott, professor at Yale School of Management, concluded that since the United States gave China permanent normal trade relations (PNTR) status in 2000, half of the jobs lost in the U.S. manufacturing industry can be attributed to the increase of imports from China. In addition, suicide and related causes of death were significantly higher in the areas more heavily affected by PNTR. An unemployment increase of just 1 percent resulted in an 11 percent increase in suicide rate. White males were hardest hit as they are more likely to be engaged in the manufacturing sector than other groups, the report indicated.

The Chinese regime, by comparison, lost nothing and only benefited from globalization, which is reflected in four major areas:

However, China has not completely embraced globalization. It has refused to implement universal human and political rights, including democratic elections. From the beginning of the Hu Jintao period, the Chinese Communist Party’s (CCP) Central Committee frequently announced its intention of preventing of a color revolution and explicitly declared its rejection of the infiltration of Western values.

This was similar to the colonial era of the Qing Dynasty that wanted to “keep China’s system and learn Western technology.” Today, the CCP wants to keep Marxism and Maoism while utilizing Western science and technology.

Can China Carry the Banner of Globalization?

In terms of military strength, China ranks third in the world. However, compared to the United States, there is a wide gap, especially in terms of its air force and naval combat capability that are required for global intervention.

As to economic strength, although the GDP of both China and the United States are over $10 trillion, there is a big difference in the per capita GDP. While the number of rich people in China exceeds that of the United States, the number of poor in China ranks second in the world, only after India. The amount China spends on national security in Xinjiang and Tibet is similar to military spending, but it is just for maintaining internal stability. These points alone demonstrate that it is not possible for China to lead globalization as the United States has done.

Hu Jintao once coined the term “China model,” and a group of Chinese and foreign scholars then proclaimed that “Beijing’s consensus will replace Washington’s consensus.” After Xi Jinping took over, these statements were shelved.

The Chinese government is well aware of its weaknesses. Though it is very appealing to be a global leader, Beijing knows clearly that it has a tough job on its hands taking care of China’s financial system.

In Societe Generale’s latest global financial market “Black Swan” chart China was singled out as the largest “economic risk,” given its housing bubble, large debt, and bad loans. It also estimated that China has a 20 percent chance of a hard landing. This estimate is not exaggerated. Chinese media are now shouting slogans such as, “Give up real estate and protect foreign exchange reserves.” We can tell that China’s foreign exchange reserves are facing a risk of rapid loss and are the weakest part of the financial dam. Just think about it, the Chinese government is trying to protect the U.S. currency instead of its own currency! Although the RMB has become one of the five reserve currencies of the International Monetary Fund, its strength is far less than that of the U.S. dollar.

In summary, U.S. world leadership status has depended on three factors: Firstly, it is a very strong military power. Secondly, the U.S. dollar is the global reserve currency, with the United States selling bonds around the world. Thirdly, the United States has economically supported the world.

China does not have any of these powers. It cannot take the United States’ place. Its values are incompatible with the Western world, and China’s RMB does not have a strong international position.